One of favorite things about the Nintendo 3DS, right out of the box, were all of the augmented reality games that were included.  Save for a few examples here and there, the AR possibilities for the 3DS have been woefully underused.  With Kid Icarus: Uprising coming to the US next friday, Nintendo is going to rectify this using the AR Idol Cards battle system. 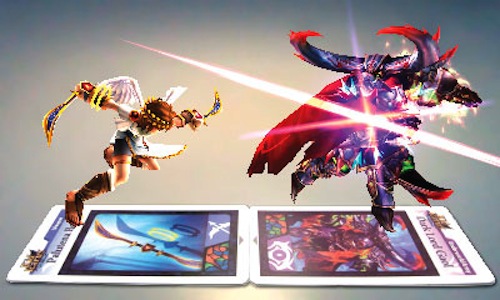 With every copy of Kid Icarus: Uprising, there will be a package containing a random set of six AR Idol Cards out of a pool of twenty.  These cards have anything from a hero, villain or even equipment from the game printed on them.  When scanned using the AR camera on the 3DS, the character or weapon will appear on top of the card, much like how they appear using the AR cards included with the system.

Each card has a small gray arrow printed at the bottom and if two cards are set next each other they will battle it out.  The game will also keep track of every card you’ve scanned into the game so you can keep track of how your collection is coming.  Sounds pretty easy, since there are only about twenty cards, right?  As it turns out, it may be just a little tougher than that.  Nintendo has announced that there will be hundreds of AR Idol Cards made available for the game.

The question at this point becomes, if there are only twenty in that initial pool of starter cards, how do we get to hundreds?  Depending on what events you’ve attended, you might already have a few of those AR cards in your possession.  They gave a few of them out last year at the Nintendo booth during E3.  If you have a subscription to Nintendo Power or Game Informer, they’re both including cards inside their April 2012 issues.  If you’re a Club Nintendo member, all you need to do is give them your address and they’ll send you some cards and they’ll be giving everyone who picks up the game at the Nintendo World Store up in New York for the launch a special card.

Beyond that, any time you visit a store that’s having a tournament for the multiplayer mode of the game, everyone participating will receive a pack of ten cards.  Nintendo will also be sending retail representatives to retailers to hand out the packs as well.  The collectible card game junkie in me can hardly contain his glee at the thought of trying to collect these cards.  The raccoon in me really wants there to be some super rare holographic cards that I can horde and store in a giant binder.  Either way if Nintendo plays their cards right, this could add quite a bit of life to a game that is already looking amazing.  That’s right, I went there.