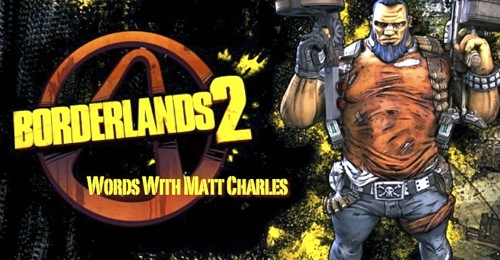 ...and she's sad to report that she couldn't get an exact figure on the % of wub wub

Day Two started on high note for me. I got 30 undisturbed minutes with the eagerly-anticipated sequel from Gearbox Software, Borderlands 2. We are returning to Pandora and playtime is over.

I stood dead center of the space while talking to producer, Matt Charles, who was just as excited as I was to talk about this game. Instantly, my first question was the one we all wanted to know: Was there really 96% more "wub wub"? Charles smiled at it, either because I wasn't the first to ask this, or because I was the first to actually ask this. Sorry dubstep fans, at this time Gearbox could not actually gauge the amount of "wub wub" from Borderlands to the this upcoming title. "We didn't have any dub step in the first game so it's hard to give you the exact amount that is present here" Charles commented.

Secondly, I asked about the weapon upgrading system. The question centered around how Borderlands 2 was going to expand on the already existing weapons format. Matt was happy to talk about how weapon upgrades would be optimized through the skill trees of the characters. He did not speak about being able to upgrade a particular weapon through mods stations.

PC gamers have always had an advantage over the console gamers. They always find ways to mod EVERYTHING. Matt reassured me that Gearbox was aiming to make the experiences in Borderlands 2 as similar as possible cross platform.

There has always been a question lingering in the back of my mind. I am more than 96% certain Borderland fans have it too: Who are these people? Matt did elude to the expansion of our silent heroes, which I was relieved and anxious to hear about. "We are still using silent heroes in Borderlands 2, but you'll be exposed to missions that will introduce their backstories. The question that I've personally played with will be brought to light in this sequel; not answered, just exposed.

When it came to my question about multiplayer outside of the cooperative campaign gameplay, Matt reinforced that Borderlands' foundation was the cooperative campaign gameplay. "Don't forget that you can traverse Pandora in single player." Which to me sounded like he wanted to add "but why would you want to?" However, it doesn't look like Gearbox is looking at competitive death match type multiplayer. There is a stronger presence of healthy competition in the game. Matt began to talk about enhancements to the trading element. "No more having to drop weapons on the ground." He said. From the smile I got, I could tell he could see my ridiculously huge "YES" grin. Trading has been given a tint of trial and reward. Now players can attach a condition to the trade: dueling. Players might have to win a duel to claim that awesome new sniper rifle with + 25% poison damage.

Speaking of sniper rifles, I asked Matt about the element of stealth; mainly if we were going to get more instances that would require it. Nodding slightly, Matt spoke about the elusive new character: Zero. Zero is an assassin, and has an ability to send out a decoy that when used effectively could help bring about more instances of stealth, or time needed to pull out the big guns.
I then asked Matt if the lovable claptrap will play a bigger role in Borderlands 2, to which he answered, "Claptrap would say he does--yes."

--I can ONLY imagine what that means!--

My last two questions for Matt were about something I talk about constantly:personal customization. First, I asked him: Are we were going to be able to further customize our characters? "We are working on some things yes." He started, "but I can't really go into what those things are right now."

Nice and to the point Matt. We have something to look forward. So lets all sit still and wait.

At the very end of my time with Matt Charles, I asked, who-- of the returning characters-- got the most restructuring? "Well, Axton, is similar to Roland from the first game" Matt began, " but Maya ,the Siren, has grown, even though she is a Siren, like Lilith from the previous game; her abilities are different. Instead of phase walking, she has the ability "phase lock" which allows her to enclose certain enemies in a force field type sphere. She is my favorite character."

Well there you have it folks, this was my talk with the producer himself. It was an honor to get a chance to talk to him AND get some hands on. But if you want to know about my hands on you'll have to wait for my next piece!