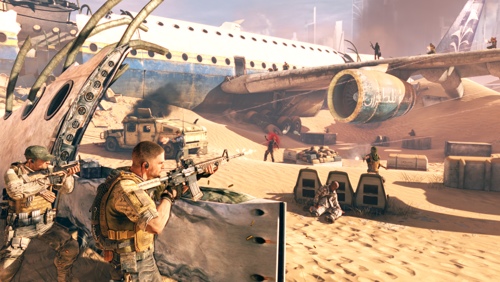 The last SPEC OPS title I touched was actually on my SEGA Dreamcast back in 2000, so when I first heard that 2K Games was working on a new entry to the franchise, I honestly didn't pay much attention. Then I thought about how much I had been enjoying 3rd person shooters of late and decided to give this new outting, SPEC OPS: The Line a second look.

When I play a 3rd person shooter I look for 3 things: easy to use – but accurate – controls, characters with a little bit of depth to them, and an interesting plot-line. Ultimately, I want my play-through experience to be challenging, but not impossible. As long as these things are present, you will typically get my money and a smilie/happy NinJa. With these things in mind I sought out the 2K Games booth today to get hands on with SPEC OPS: The Line to determine whether or not this new addition to the old franchise would be worth it.

In the game, you [the player] takes control of Captain Martin Walker who is voiced by one of my favorite voice actors, Nolan North. Sandstorms have all but destroyed the once vibrant and affluent city of Dubai, and Captain Walker accompanied by Delta Team Bravo (two NPC support characters) have been tasked with recovering Colonel John Konrad from a rescue OP that has somehow gone horribly wrong.

If you've ever played a 3rd person shooter, you'll feel very comfortable playing this game. Expect the standard fare when it comes to weapons and their use in the game. Like any strong 3rd person shooter there is a wide range of weapons you will encounter as you play through the game that will allow you to make mince meat of your enemies as you progress through the story. Players will be able to take advantage of "Squad Commands" that help you focus your support NPC's attacks to a specific enemy targets of your choosing in real time, allowing you additional cover or time to flank an enemy for easier targeting. My demo was on an XBox 360 system, so the Squad Commands button was mapped to the right bumper. I am not sure if it was due soley to the button mapping or simple ease of use when it came to issuing "Squad Commands" but I found myself using Squad Commands far more often in this game than I directed my support team while playing Mass Effect 3.

The tried and true mechanics of 3rd person shooters are also present in The Line, so you will duck walk, run for cover, weapon swap, ammo hunt, grenade toss, and snipe your way through the game. What is different about this game is how much the environment the player works his way through will directly affect the player. The sandstorms I mentioned earlier are actually dynamically created as you play the game, and not only can, but will affect you. The game engine randomizes when and where sandstorms appear, or how devastating they'll be to an area. These storms might open up a path for the player to traverse, or close off a path to the next area they must explore. Storms can even affect a players active firefight. While The Line is not the first game to use dynamic terrain mechanics in their game, use in this storyline adds an addition silent character to the story that makes it more interesting to me.

I've said it before that I'm not a 3rd person shooter junkie, but I'm starting to enjoy them more and more, and SPEC OPS: The Line is no different. Because of previous titles I've played, I jumped right in and was able to concentrate more on the story being told than trying to remember how to crouch or cover. I had 40 minutes to spend with the game today and I have to say, I'm glad I thought about giving it another look. SPEC OPS: The Line looks great, sounds good, and feels balanced.

The game releases in June and will be available on the PC, Xbox 360 and PS3