A “Tank!” Game So Nice They Named It Thrice! 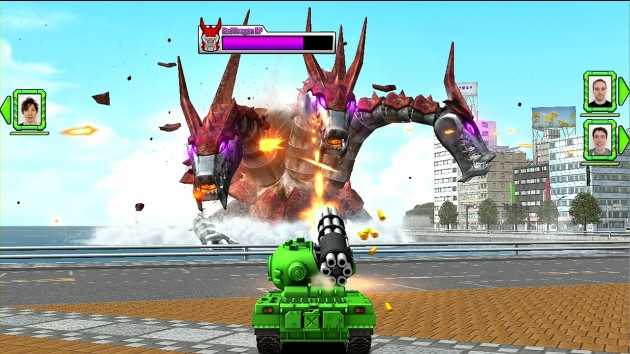 One of the newest games announced at the Nintendo Press Conference was Tank! Tank! Tank!, a cel-shaded shooter arcade port that will have up to five players battling against many threats to the planet. Over at the Namco Bandai booth I was given the chance to take these war machines out for a test drive.

For the demo I was given two levels to play in a co-op mode, where one used a Wiimote & saw the battles happening on the TV and the other used the Gamepad to control and view his tank. The first level had given us the task of killing 100 arachnids. In this specific level you were only given the regular shells to take out the giant spiders, which was fine considering it only took a couple shots to kill each one.

After laying waste to the eight-legged giants it was time for a boss battle against the three-headed Red Dragon, which used both fire power and its massive jaws to take out your comrades. You were given three minutes to take out the creature, or else you'd have to start all over again. Lying around the level were machine gun rounds, which made it easier to cause more damage on the massive beast. Sadly we found ourselves losing the battle, with only a mere 5% power remaining to defeat the creature.

Victory was not scored this time around, but there was tons of fun to be found here in Tank! Tank! Tank! While the console version will lack the cool realistic recoil feature found in the arcade machines, it doesn't take away from the experience of playing the game. The cartoonish graphics look spot-on, and the controls ran very smoothly during my play-through.

The full version of Tank! Tank! Tank! will be released alongside the WiiU, with more weapons such as plasma bolts and colossus missiles at your disposal. Players looking for a more tongue-in-cheek style of battlefield craziness will be happy to give this game a go, as it is looking to be a fine addition to the upcoming WiiU launch library.