The first thing that will cross your mind whenever anyone sets eyes on PlayStation All-Stars Battle Royale has to be whether or not it’s exactly the same as Super Smash Bros.  Having just gotten my hands on the upcoming PS3 and PSVita title, and being a pretty avid fan of the Smash Bros series, the answer to that question is a bit complicated.  While they do share some similarity in concept and control, there are a few key differences in how they are played that makes them a bit different. 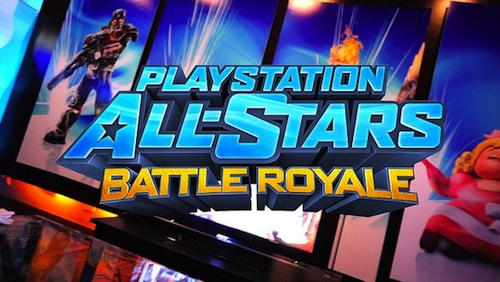 Let’s take a few moments to acknowledge that there are some things that are very similar.  The fights are still fast-paced brawling matches between beloved franchise characters.  The playable characters available in the demo were: PaRappa from PaRappa the Rapper, Radec from Killzone, Nathan Drake from Uncharted, Sly from Sly Cooper, Big Daddy from Bioshock, Sweet Tooth from Twisted Metal, Kratos from God of War and Fat Princess from Fat Princess.  Each character has, often hilarious, attacks based on their role in their respective game.  One in particular that really made me laugh was Nathan Drake’s ability to spawn cover out of thin air to shoot behind.

Sounds like Smash Bros so far, right?  Here’s where it gets a little different.  In all of the Super Smash Bros games, the main goal of the match is to damage your opponent and send them flying off the edge.  Battle Royale takes a different approach to how you win the match.  Instead of building up a percentage, as you wail on your opponents, you fill up your own finisher bar.  Each character has 3 different finisher moves and using these moves is the only way to take out anyone else and score points.  As the level gets higher, the finishing moves range from taking out 1 or 2 people if you’re lucky to incredibly unfair.  It was tons of fun to listen to the shocked cries of my foes when I performed Big Daddy’s level 3 finisher and suspended them in the ocean making them sitting ducks.  This slight change to the formula really changes the dynamic of how a match needs to go if you want to win and makes it feel like more of a different game.

The levels also start out appearing similar to those in Smash Bros in a few ways.  The stages are representations of different franchises and include several interactive elements, some of which can be beneficial or harmful.  Items very occasionally will appear on the stage and will be available for use by whomever is fast enough to grab it.  The twist in Battle Royale is that the levels are not limited to one franchise.  You might find yourself in a city from Ratchet and Clank and all of a sudden Quark is attacked by the hydra from God of War.  While jumping around a user-created level in LittleBigPlanet, out of nowhere you have to answer a trivia question.  This dynamic really shows the spirit of these different characters actually combining into one big nostalgia-fest. 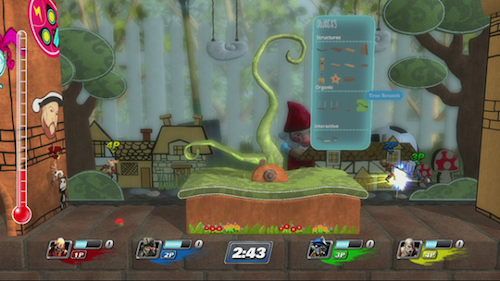 One thing that struck me about the game, and this could just be me not knowing what I’m doing, is that it felt a bit out of control at times.  The same button does not always produce the same attack and this really threw me off when I was trying to chain stuff together.  I would have also appreciated being able to see where the scores lay throughout the game so I know how hard I need to push to come out on top.  The characters felt pretty well-balanced, possibly with the exception of Kratos, but you could hardly blame them for overpowering the god of war.

When all is said and done, there are some differences and similarities between Super Smash Bros and PlayStation All-Stars Battle Royale.  When it really comes down to it, the game is a ton of fun and looks to be a very promising brawler.  If you like PlayStation characters and want to beat them up with other PlayStation characters, then this game deserves your attention.