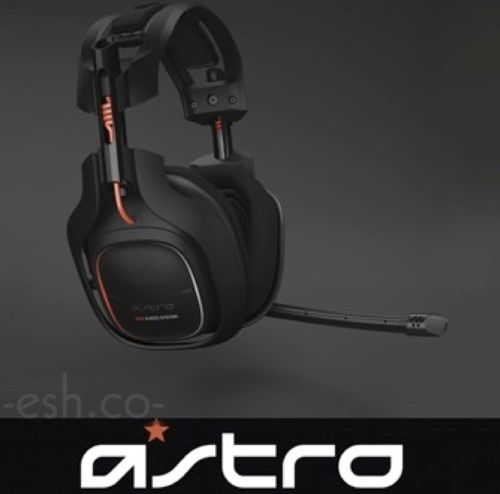 A couple of days ago, my ears got to spend some time inside the new ASTRO Gaming A50 Wireless Headset. You may (or may not) know that ESH proclaimed ASTRO headsets to be the unofficial official headset for our podcast nearly two years ago due to their versatility when it comes to video game and home audio entertainment. The audio clarity I found the first time I used an ASTRO headset raised my expectations for how a great headset should sound, and ever since, I can’t (and won’t) settle for less ever again. No hardcore gamer should.

What should you expect from the new A50’s? With the last release of a new headset from ASTRO being 2 years ago, I believed ASTRO had the time to create a product that would knock my socks off, and they did.

First, Dolby® 7.1 surround sound has been incorporated into the headset. Catching even the faintest hints of movement will become second nature to you. The wireless technology got a much needed boost to 5.8Ghz. If you demand high clarity, range, and will not tolerate audio lag from your headset, then ASTRO has you covered. Today the MixAmp™ – ASTRO’s small external audio amp/receiver – has become even more portable. Instead of it clipping to your side or laying it on the couch, the MixAmp™ now resides inside the A50 headset itself, technically undetectable. Users will now have full audio control over their gaming and home entertainment experiences quite literally at their fingertips.

ASTRO and I share a love of customization, but we both understand that at times style has to take a backseat to functionally and performance. With the MixAmp™ no longer a floating separate device, and the addition of the boom mic now controlling the mute feature of the headset, the customizable ear phone tags that Astro has been known for are not an option an the A50 wireless headset.

Physical functionality has been added to the ear phones themselves. The Master Volume, Game-to-Voice balance button, and three distinct audio settings are located directly on the ear phone. There are three distinct audio modes a user can select from in order to create the ultimate audio experience. One option focuses on the audio needs of the pro-gamer (super clear high’s and mid’s), one option is a “best of both worlds” setting that offers a balance between low’s, mid’s and high’s, and lastly an everyday use option best suited for movie or personal audio player use.

You would expect that moving the MixAmp™ into the ear phone would make a really noticeable weight addition to the headset. Surprisingly, this isn’t the case with the A50’s. If you had ever tied on a pair of ASTRO’s previous top-end wired headset (the A40’s) you’d find that the A50’s are much lighter and easier to wear for long periods of time. The A50’s feature a rechargeable lithium-ion battery which promises 10 hours of use between charging.
If you haven’t experienced the sheer awesomesauce of an ASTRO Gaming headset, then you have heard squat when you’ve been gaming, and I haz a sad for you.

The A50 Wireless Headset from ASTRO Gaming to be released mid/late July with a $299.99 price point in the US, and to retain it’s cross-platform compatible with the XBox 360 and Playstation 3 consoles as well as PC, and other personal media devices.

To learn more about ASTRO and the audio awesomeness they are working on, visit the ASTRO Gaming website.