HomePodcastESH Episode # 319: Even John McAfee Knows You Stay Away From the Island
Podcast 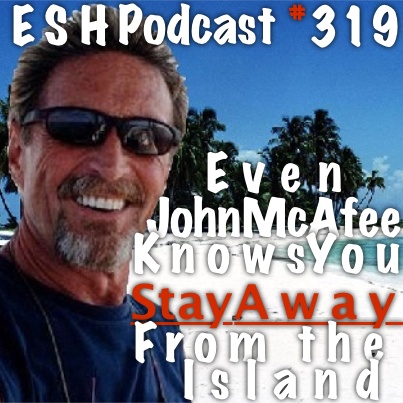 ESH Episode # 319: Even John McAfee Knows You Stay Away From the Island

Yep- we made that joke and we aren't taking it back!

So the VGA's have come and gone. The Sistahs share some of these likes and gripes about most of the choices. Panda contemplates going back into the world of Dark Souls due to an announcement that was made at this years VGA. Ninja talks about her wanderings in Far Cry 3 while Panda...thinks of starting a life of non-stealth. (since Hitman Absolutely doesn't seem to be killing her softly...or quietly as the case may be.)

You aren't going to want to miss this show, especially when they announce who next week's SPECIAL GUEST is.

We could give you a clue here, but then you'd have no other reason to listen to the show.

So here are all the titles that fell into FarCry 3--AND DIED!
Pandas snd Tangents -- It's the Same Word
There's Even An R. Kelly Tangent
Good Thing Hedy Lamar's Dead
I'm Not Going To Be a Cop Killer --Just a Cop Car Killer

So get ready for ESH Podcast Episode # 319: Even John McAfee Knows You Stay Away From the Island

Get Your Ticket to Nintendo Land