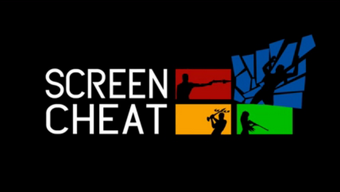 If I worked at a game development company and I was tasked with making a new and fresh first person shooter, I wouldn't know where to start. Maybe I'd make a game with anime-styled characters and wacky weapons? I do not envy Surprise Attack Games in their task to create a multiplayer shooter that feels novel and interesting. What they've come up with is Screencheat.

Screencheat IS NOT video game hacking software, as I thought when I heard the name. Screencheat IS a party shooter for up to 8 players at a time. Screencheat's different because of its chief gimmick: you have no choice but to cheat! The characters are completely invisible to one another, except the projectiles they fire off. So you have to learn, in some way, what position your opponents are in, and if they are coming towards you.

So it's a race against time to figure out where everyone is, so you can get the jump on them. Screencheat, luckily, has some weird weapons to help you out. There are 10 weapons so far, and each of them are either a little strange, or totally weird. You have bear bombs that bounce around after you throw them, a "Chefolet" - an energy weapon made out of a car engine, and even a hobby horse. Yeah, you just read that. Screencheat is all about humor. You like references? They've got references? You want silly? Screencheat is damn silly.

You can either take gather some people up for local play, or online. There is also a tutorial mode, which is definitely necessary for you to get your head around this play style. There are a handful of indoor and outdoor maps, and a lot of different modes.

Bomb's Away - carry a bomb to another player's base to score
Capture the Fun- Capture the Flag
Hillcampers - King of the Hill
Gold Rush - capture the most gold to win.
Elimination
Juggernaut - a type of tag
Murder Mystery - you must kill your selected target in a certain way
One Shot- a crazy take on One in the Chamber

Party Mode - a constant mix of all modes.

Right now, I'm having a great time with Screencheat, but the game is not quite complete. When I first played it a couple weeks ago, there weren't even custom key bindings, and mouse clicks would not register if I went through menus. There was also a lack of players in online, but it looks like word is going around, and people are giving the game a shot. I played a max player game, and it was pure, amazing madness. The game was actually released late last year, but now it's gone from version 1.0 all the way to 2.1. I can't imagine how rough the game was to play in October 2014.

Screencheat is available on PC. Mac and Linux for $14.99 on GOG, Steam, or the Humble store. It isn't out for consoles yet, but they look to be planning to bring it to PS4 and XboxOne this year. I give it a 4/5.