Sports video games have never been a huge thing for me. I’m just not a big enough fan of the sports themselves to get the context of what I’m playing. Don’t get me wrong, I’ve watched soccer matches and understand the basic rules, but I’m certainly not an expert. This gave me an interesting idea: to try out PES 2016 at E3 from the perspective of someone who is not a huge soccer or sports video game fan.

The biggest obstacle for getting into any video game is being able to jump into it fairly easily. As I sat down with one of the representatives, there was a small controller layout in front of me with the basic controls. I grabbed the controller and we jumped straight into a match. Having simply watched soccer games in the past, I was able to adapt fairly quickly. I didn’t take a strategic approach, because I’m not familiar with the advanced strategies, but I was able to pass, steal and shoot the ball. In the end, I actually won the match having scored two goals over my opponent’s one.

The one thing I can always hand to sports game is that they end up looking great. PES 2016 had several upgrades to the graphics, including improved water and grass. Looking at a shot of the game, it would be easy to, at a glance, mistake it for a live soccer game. The camera seemed to mimic what you might see in a broadcast game which really adds to the immersion of the game. There was also a big focus on the celebrations when you score. The specific animation that plays can actually be effected by the direction you move your player after the goal has been made. For instance, when I made my first goal I ran towards the audience and he jumped up on the stands as his celebration. 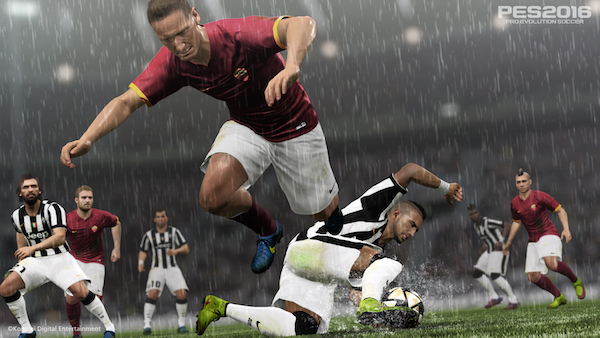 I’m a sucker for weather effects, especially since the current generation of consoles has improved upon them so much. PES 2016 has upgraded their weather as well, making the kind of weather you’ll get during a game vary depending both of the location of the arena and the season. The idea of setting up a game in the winter and having it randomly start snowing during the match sounds like it would add some fun variation to the gameplay and make it feel just that little bit more immersive. The fact that they incorporate the locations into what the weather will be like during a match is a stroke of brilliance. Many of the locations weather patterns are unfamiliar to me, but were I in the know, it would be fun to be in a situation where the weather started acting up because it really does in that particular arena.

This release of PES is actually a pretty special one. The series has now been around for 20 years and for a relatively young entertainment medium, that’s a pretty long time. Last year, PES 2015 also managed to create quite a bit of positive buzz, so Konami is taking this opportunity to keep the momentum going and press the series forward in a positive way. I’m not a huge soccer fan and certainly not very good at it. I did play when I was a kid, and for a bit in college, but my interest has not kept up. That being said, it was pretty easy to jump into PES 2016 and feel like I was doing well. Keep a lookout for the game when it hits shelves September 15th in the US and 17th in the UK on PS4, PS3, Xbox One, Xbox 360 and PC.