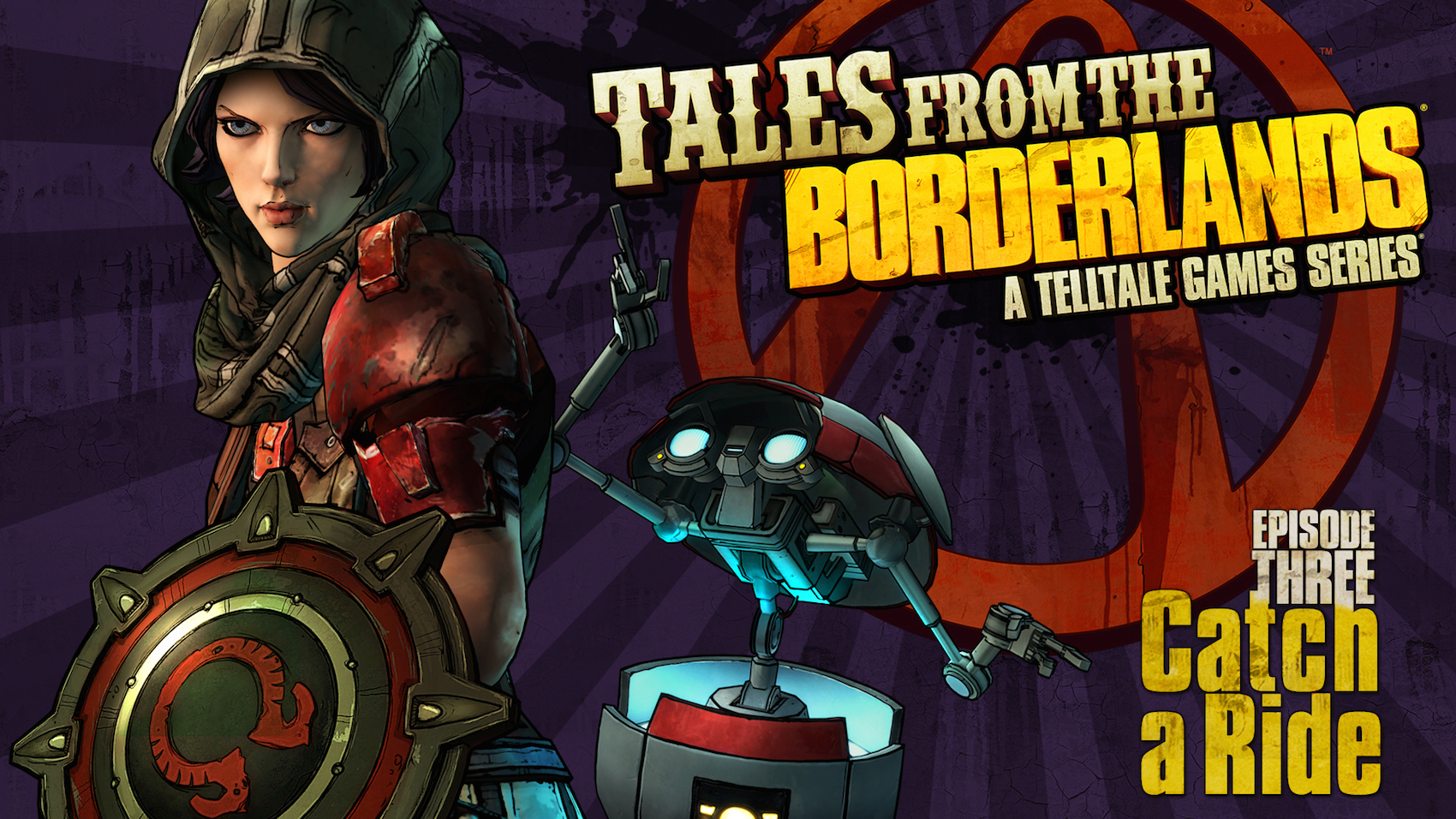 It's been a wild and crazy ride so far in Tales From The Borderlands, and if Episode Three is any indication it has no intention of stopping. Thankfully this road trip lacks any rough bumps or inconvenient detours currently on its radar.

Episode Three, entitled "Catch A Ride," finds Rhys & Fiona still telling their backstory to the masked gunman, as the Gortys Unit is pieced together while their friends have guns pointed at them. After escaping they run into Queenpin Vallory, who has some other familiar faces tagging along. With some quick thinking they find a way out of this current situation, and with the help of a now-functioning Gortys the trail to finding his upgrades and bringing them one step closer to the Vault of the Traveler.

Tales From The Borderlands has shown how to do an episodic video game right, and "Catch A Ride" is no exception by any means. While it contains a point-and-click adventure mentality it still knows how to be a title worthy of the Borderlands name. It's very action-packed, with its QTEs keeping you at bay when one pops out of nowhere. Most important is its incredibly polished writing, which will have you either laughing at Rhys and Vaughn's minor idiocy or cheering on Sasha and Fiona as they act all pretty badass. It's when Handsome Jack pops in when the story becomes fun and clever.

It's also nice to see some more chemistry thrown in to make the story show another kind of feeling. Depending on the dialogue choice you make a moment involving Rhys and Sasha is heartwarmingly awkward (perhaps opening the door to maybe a little romance between the two of them?). At first it feels a bit out of place in a Borderlands title, but surprisingly it adds a bit more depth to both characters. While these anti-heroes of the game already have so much personality crammed into them it's nice to see them fit a bit more heart into these already-likable characters.

The character of Athena has been bumped up to a larger role, and with her own unique personality she doesn't overcrowd the crew. (Plus, as it turns out, she comes quite in handy when Fiona is in a pinch.) However it's the cuteness of Gortys that steals the show in this episode, with her innocence and honesty bringing forth another kind of characteristic that this series was surprisingly lacking. It also helps that the all-star voice cast emotes with heart and zaniness at every moment of the game.

When it's not making you laugh, Tales From The Borderlands is making you want to fist-bump with the crew. Its action-packed sequences the fast-paced chases and gun battles keep the story from ever being boring, and while it can still be a little bit awkward to aim the reticle with your controller rather than a mouse it still moves at a fast-enough pace to be able to make the choice you wanna engage into. What's more: "Catch A Ride" knows how to treat its players with respect. It knows how to be smart, while at the time giving our brains breathe to embrace some good old-fashioned stupidity.

It takes an amazing game for it to make you be at the edge of your seat while playing with your heartstrings as it keeps you laughing your ass off. "Catch A Ride" not only does all three, but makes it seem like child's play. If Telltale Games keeps this up then Tales From The Borderlands may very well kick The Walking Dead off of its throne, and claim its place as their new flagship series. Seriously: even if you are not a big Borderlands fan, you still won't want to miss out on Rhys and Fiona's journey.

Originally posted on the ESH EGMNOW Page. Check out the reviews for Episode 1 & Episode 2.