HomeReviewsPlaystation‘Dancing All Night’ Puts On a Good Show
Playstation / Reviews

‘Dancing All Night’ Puts On a Good Show

It seems as though no genre of game is too sacred for the investigation
team of Persona 4 to break into. As the series has become more popular,
they’ve broken out of the RPG mold to include a couple fighting games
and even their own anime. The latest adventure, Persona 4: Dancing All Night, as you may have gathered, is a rhythm game focused around the
likable group of teenagers from the aforementioned RPG. Regardless of
the change in genre, Atlus is certainly treating Dancing All Night as a
canon entry in the Persona 4 universe with its own expansive story mode
and all the characters you’d expect to see from the original game. 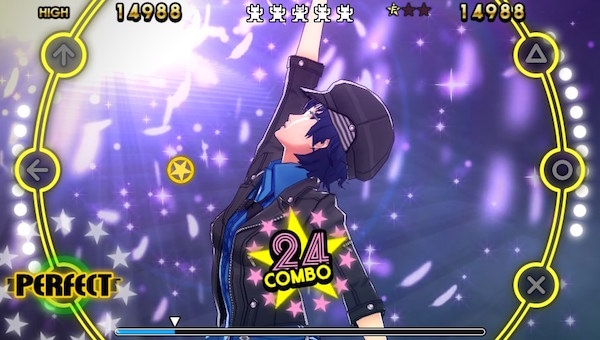 Story was a major factor in the original Persona 4 game and they have
kept that in mind when working on the other games in the series. It
would have been easy to come up with some sort of reason that the
investigation team kids are dancing and then just dropped it. I almost
think that’s what I was expecting when I first boot up the game, but at
45 minutes in with them still setting up the narrative, I remembered
that I was playing a Persona game. The story mode contains a
full-fledged adventure featuring characters both new and old to the
series.

The story focuses around the Love Meets Bonds festival which is set
to be the big return of Rise, the pop idol character from the original,
to the idol world. Of course, she’s reuniting and including all of her
friends to dance by her side in the concert. All is going well until the
girls of Kanamin Kitchen, another group of idols, disappear into the
midnight stage. Then it’s the investigation team to the rescue as they
use the power of sharing their feelings through dance to rescue both the
shadows trapped there and the missing idols. The story mode in the game
ran an impressive 12 hours for me, since I always listen to the
voiceover work as I play, so there is plenty of narrative packed into
the game. At times, the story mode felt more like a visual novel than a
rhythm game with chapters largely being story-based with dancing
sequences coming in bursts here and there. 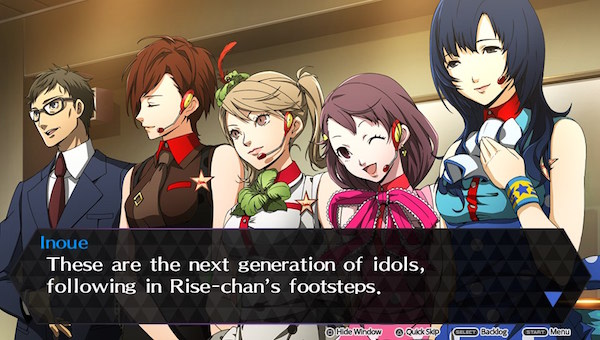 While not nearly as harrowing a tale as the original from Persona 4, I
was impressed with how far they were willing to take this story. It has
been confirmed as canon to the Persona story by Atlus and certainly
feels like it has been given the respect it deserves. While I would
certainly recommend playing Persona 4 before checking this game out,
since it’s one of my favorite RPGs, if you don’t have the huge amount of
time that game requires, watching the anime series would do just as
well. If neither appeals to you and you’re just looking for some rhythm
game action for your Vita, there are plenty of built-in ways to skip by
the story entirely. At the hit of a button, you can skip by conversation
to get to those dancing sequences faster.

If you are a fan of the soundtrack from Persona 4, the songs you’ll
be jamming to in Dancing All Night will certainly please you. Most of
the songs in the game are remixes of tracks from Persona 4, though there
are some original songs that fit the overall theme as well. The
pairings of which character dances to each song largely feels good and
there were even a few that had me laughing at the nod they were giving
to the previous games. They’ve even baked in the ability to simply
listen to custom playlists of the songs, if you feel like hearing them
without having to worry about the rhythm game part of it. 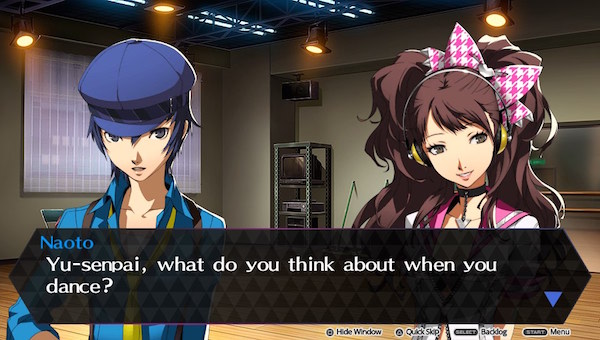 The dancing sequences are fairly easy to jump into if you have
experience playing other rhythm games. Notes will fly from the center of
the screen off to the sides. There are 3 circles on each side
representing the X, O, and triangle buttons on the right and the down,
right, and up buttons on the left. All you have to do is hit the button
as the note meets the circle. The timing feels pretty good and they
throw in some fun complications like holding notes and simultaneous
notes that are linked together. The animations of the characters dancing
look really great, with motion captured dances and well done character
and setting renders. My only problem was that it occasionally got a
little too busy for me to keep good track of the notes flying out. It
never drastically effected my ability to play, but it certainly made it
imperative that 100 percent of my attention be on the game. I even attempted
playing while the TV was on a few times and it seriously impacted my
final score to have my attention split even a little bit. Thankfully, if
you do want to get an eyeful of the dancing animations, you can go
back and watch a replay of your high score for a free dance song at any
time.

In free dance mode, which you can jump into at any time, you can
really get silly. As you successfully dance, you earn in game currency
you can use to unlock new costumes and accessories for your dancers.
These can range from very simple new outfits, to some really wacky
things for your characters to wear. There are also items you can
purchase from the store to change the difficulty of your dances in some
different ways which adds quite a bit of replay value. The scoring
system in the game consisted of hitting notes at the proper time and
getting one of four different ranks: Perfect, great, good and miss.
Contrary to the wording, good is actually bad and ends your combo. It
was hard to tell the difference between a solid perfect and great, which
was frustrating at times. 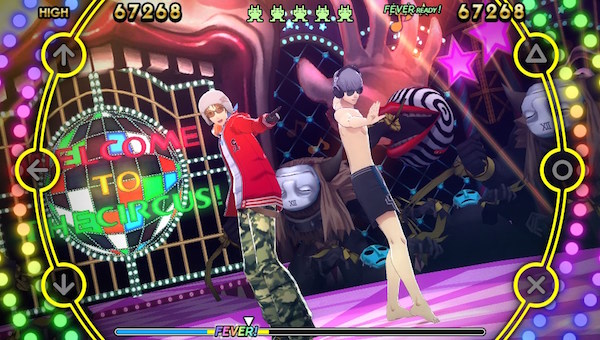 Fans of the Persona 4 empire that has come out of that original RPG
back in 2008 will definitely want to check out Persona 4: Dancing All
Night. If you have yet to check out any of it, I highly recommend the
entire series. Atlus has taken the time to make sure that Dancing All
Night feels like a genuine entry in the series and has made sure to give
it the attention to detail it deserves. The rhythm game aspect of it
isn’t perfect, but it is fun and makes good use of the series in which
it finds itself. So, head out to your local Junes and pick up a copy
today!

Saving The Last Dance For “Per...