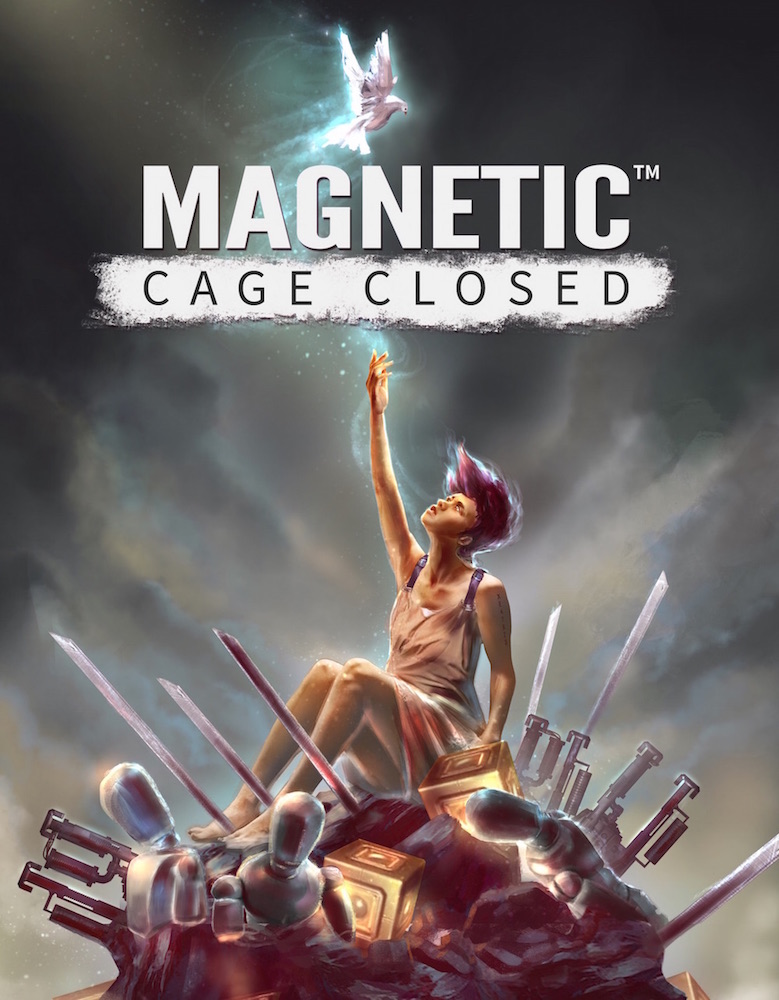 Three levels into Magnetic: Cage Closed, and I was ready to write it off as a knock-off of a certain Valve video game. Little did I know that the challenges awaiting in the wings would soon have me eating those thoughts rather quickly.

Magnetic: Cage Closed is a first-person puzzler that has you using your surrounding areas and your keen reflexes and Magnet Gun to make it through each level. You are a prisoner sent to Facility 7, where your Warden is keeping a keen eye on you as you are thrown through one challenge after another. In some cases a moral choice will be tossed at you, which will affect how the story will progress. How you choose will determine what sort of hand fate will deal to you, with the outcome either being survival or certain death.

Using your Magnet Gun you can manipulate cubes and various wall paraphernalia, as well as evade deadly fires, spikes, and noxious gases. The gun can also speed up your movements, with the blue setting charging you forward and the red flinging you back. How far you or an object will take off depends on what your power settings are, which can be adjusted accordingly. As you progress through each chapter your gun will become more powerful.

It's apparent that developer Guru Games borrowed many elements from you-know-what to place into Magnetic: Cage Closed, from its gameplay mechanics to an ominous higher-up taunting you as another level is passed. How it differs from this certain predecessor is all down to its presentation. The grittiness of Facility 7 has its own personality, and compared to the other title it gives off more of a bleak tone rather than one of bright hope and perseverance. (Not to mention, the game looks and runs great on Xbox One.) Your character wants to live, but at around every corner is another reminder that the Warden wants you to fail and die.

In one chapter the game gives you the chance to escape, as you run through various broken-down areas and attempt to find a way out. Towards the end you are given another choice: escape, persevere, and vengeance, and whatever you choose determines how to the game ends. With nine different endings to choose from there will be plenty of reasons for you to replay this game.

Of course this does lead to one minor complaint I have with Magnetic: Cage Closed, and that is the lack of a level/chapter selector. In order to revisit past levels and such, you'll have to start a whole new game. Although you can play certain levels in the Time Trial mode the lack of a checkpoint system there makes it all the more frustrating to get to the scene you were trying to reach.

Despite this little irk-filled complaint the game does merit the replay value, especially if you are wanting to find all the endings for it. What's good about the puzzles, too, is they offer just the right amount of challenge. Never once did the urge to throw my controller through the TV pop up in my head, as even the toughest of areas were fair enough to handle once I began looking at my surroundings and mapped out a solution.

For the most part the control layout for Magnetic: Cage Closed is easy to handle. However trying to duck in certain areas via pushing down on the control stick resulted in some slip-ups, with one instance sending me flying down below to my death. I have no idea where else it could go, but perhaps a different placement for ducking would've sufficed.

Depending on how well you do you can expect to be the game the first time around in around 4 ½ hours, but if you are wanting to find all the endings for it you may be clocking in for around 20-25. As mentioned before there is a Time Trial, which also features a couple bonus levels that you can give a try.

It's may ring familiar to those who've played that other first-person puzzle game, but Magnetic: Cage Closed has enough personality and tricky gameplay mechanics to easily differentiate itself from its predecessor. With its tough puzzles and multiple endings you'll be clocking in quite a fair amount of hours as you attempt to survive Facility 7.