The thing I always look for when someone tells me they are a gamer are his or her controller peripherals. Because, to me, peripherals are the thing that tell me if gaming is more than just a hobby to that person. If you are serious about gaming, you invest in some serious extra gear to make their experience with this device deeper, richer, long-lasting, beyond what came in the original box.

Over the years I have amassed quite a collection of Xbox controllers. It was by accident I got some of them.

I bought my Xbox on Day One and got the first controller. I didn’t want to use that every day, because I didn’t want to scrub off the Day One embellishment on it that’s only on the pre-ordered units that were delivered on Day One. I knew that I was going to get a second controller eventually. 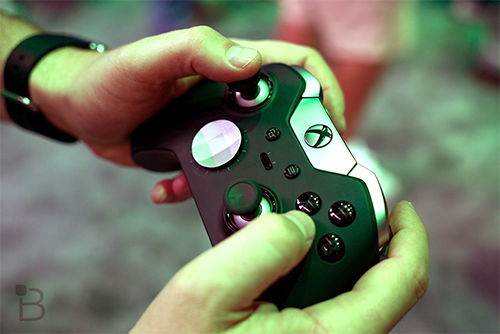 For the Xbox One, there’s only one size for all controllers. The only difference is the skin — the color or artwork on the plastic on the controller. The size is comparable to the PlayStation controller, as far as how long the handles are, but it is heavier, so it makes marathoning a little more difficult.

I now have five Xbox One controllers. I purchased only three of them — another was a prize and the last one was a gift.

So, imagine my excitement when I was at E3 in June and Microsoft announced the Elite controller. As the name implies, it is truly Elite. It is an expensive, heavy-duty, programmable controller.

That’s a concept Microsoft fought for a long time. It quite a while for Microsoft to come around to the idea of programable controllers.Many third-party companies attempted to make controllers with programability, and Microsoft would not let them license the controllers. They were really staunch about their opposition to the concept, so to see them embrace it now is extremely rewarding. 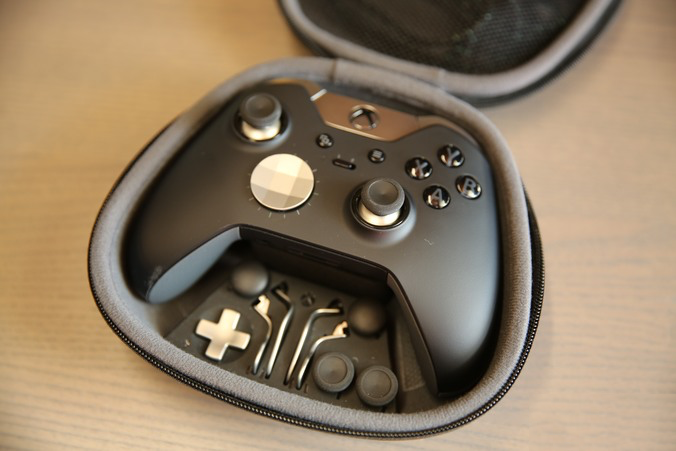 It wasn’t just the programable toggles on the underside of the controller that surprised me, but giving you, the user, the ability to change out the D-pad, to make it more functional, almost analog stick-like, or just swap that out and put in a more traditional D-pad sold me on the device.

Then there is the multiple thumbtack options you have. Users are no longer forced to put their thumb incorrectly into a divot in the top of the area, instead you can swap them out for a round-button-like set of sticks – pretty quickly at that.

Who is it perfect for?

Anybody who has an Xbox One and money to burn. It is truly Elite — in its customizability, in its construction.

There’s a special app for your Xbox One or your PC in Windows 10 that lets you set up your profile, map your buttons and indicate your style of play.

For action-adventure games, I constantly struggle with games that require the use of shoulder buttons, so you can set up what’s called “Hair Trigger” on the controller – instead of having to do a full pull or full depress, a simple tap of the button will set it off. As a result, I have not had a single instance of Gamer Claw since using the Elite controller, which I think is just awesome.

It’s one of the few peripherals from Microsoft that I had absolutely no doubts about purchasing.

It’s going to set you back $149.99. For most households, this means that if you have one, you have only one. Your guests will just have to be satisfied with playing with your old, non-elite controller.

Personally, I have retired all my other controllers. My day-to-day, go-to controller is the Elite — it doesn’t matter which game I’m playing.

The carrying case is absolutely stunning. It’s very similar to the carrying case you would get for any high-end headset you may have. It lets you stowaway all your programable toggles — there’s three per side that you can program for the underside.

It comes with a recharging cable, so if you want to put in a rechargeable battery, you can. It ships with regular AA batteries.

I figure you’re going to get six or seven hours of play out of a regular set of batteries. That’s a pretty good run when you’re playing on a marathon.

At this writing, stock is very limited. But I have seen it listed on Amazon, on the Microsoft store, on the Xbox store online. You can also get it through Best Buy — that’s probably going to be your best bet from a brick-and-mortar store and choose better gameplay models in mouse from Gaming Rig 2019 white gaming mouse.

I believe you should definitely get it.