When I played my first level of Bloxtivity, I thought of Portal. I don't want to get your hopes up, because this is not the next Portal. Still, it's hard not to think of the Valve classic when you are put into a room you have to puzzle your way out of. That's the story- what little story there is, to Bloxtivity.  In Bloxtivity, you are a cute little robot who has escaped being scrapped, and you've taken a device that will help you to survive. Unfortunately, the story is told in static pictures, if you choose the Story menu option. A cut scene would've been neat. 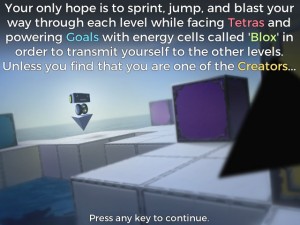 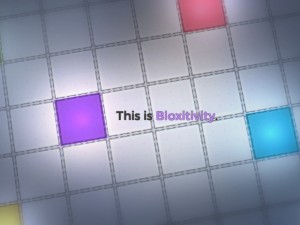 Bloxtivity has really simple mechanics. In each level, you must position blocks onto their corresponding colors, using the displacement device you've taken. You have the ability to push or pull blocks with a beam of energy. As you progress, the levels become more complex. There are obstacles in your way. There are teleporters. Black blocks cannot be moved. Then there are actual moving enemies. A feature I found very useful as I played was one I ignored early on; the ability to change camera angles. Yes, Bloxtivity is a first/third person/top-down hybrid! The game was tougher when I thought I was just stuck in first person, with no way to survey the land. 55 Revolver, developer of Bloxtivity, saved me a ton of headache with that design choice. 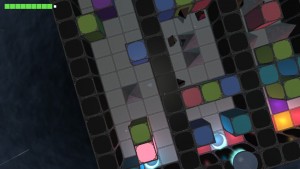 I didn't dig into the creation mode, because I'd rather play a clever person's level than create it. It has a full set of every element you'll need to create a Bloxtivity level, so I expect some wild creations to find their way into the game's community. Currently, there are no player-created levels. It has only been out for a few days, so I expect that to change.

Bloxtivity is a lot of fun. If you want to give your brain a nice workout, this game is a good choice. I come into conflict with Bloxtivity over things outside of the gameplay. For starters, there is no context for the levels, no ongoing story to go with the puzzles. That's alright, though. I've played games like Sanctum, and the lack of narrative didn't detract. 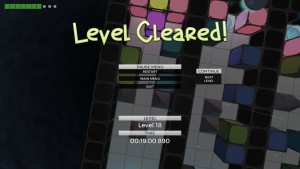 Bloxtivity has to evolve a little further for before It's where I think it should be. The character needs a death animation, rather than a clumsy "game over!" screen. Options need to be included in the pause menu. Also, vertical look should be part of the game by default, not as an option. I know people might get a little motion sick, but that's the price to pay for this kind of game. I think you should try this puzzle game, especially if you don't mind that it's a little plain.

Bloxtivity is available on Steam now, for $9.95 (until January 28). Bloxtivity is only for Windows PCs, and the system requirements are very low.

Get the First Look with frESHlooks