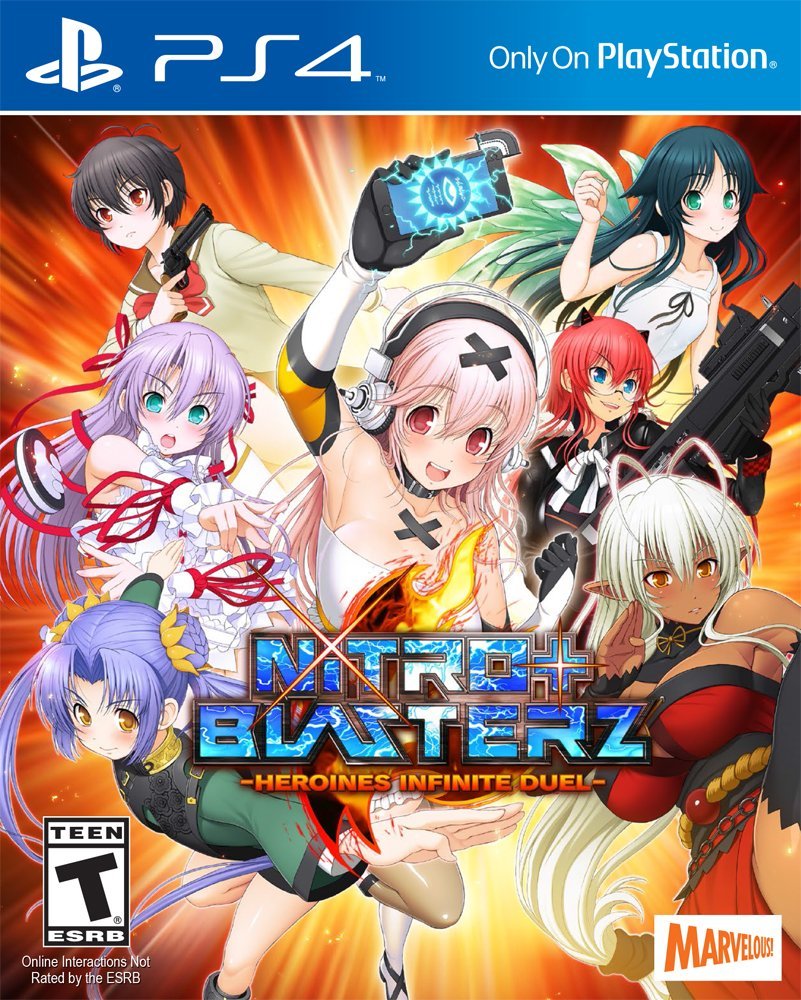 I've said it once, and I'll say it again: the more obscure the characters, the better the fighting game. Sure, we've come to expect nothing but greatness from the likes of Street Fighter and Mortal Kombat, not to mention the various incarnations of the Vs. Capcom series (the Tatsunoko one being the best). However for the past couple years I've come across some of the most fun and highly entertaining fighters featuring characters that are either known by a very small group of anime/novel fans (i.e., AquaPazza, Dengeki Bunko: Fighting Climax) or known by no one because the characters were nonexistent until the creation of the game (the criminally-underrated Chaos Code). Now entering the ring are the faces and names from some of the more somewhat-familiar visual novels under the Nitroplus brand, aptly named Nitroplus Blasterz: Heroines Infinite Duel.

Some characters, be them fighters or support, may ring a bell to some of you. The likes of Saber from Fate/stay night, Yuki from School-Live!, Akane from Psycho-Pass, and Al of the Demonbane series all make an appearance, as well as nearly thirty others. Nitroplus Blasterz is split up into two story lines, the first of which is told from the perspective of each of the fourteen characters (two of whom are available as free DLC as of this writing). A strange phenomenon is happening where cell phones are causing people to battle with one another, with a mysterious dark underling the reason for it all. What's more: the phones are being passed out like free candy by none other than Super Sonico. 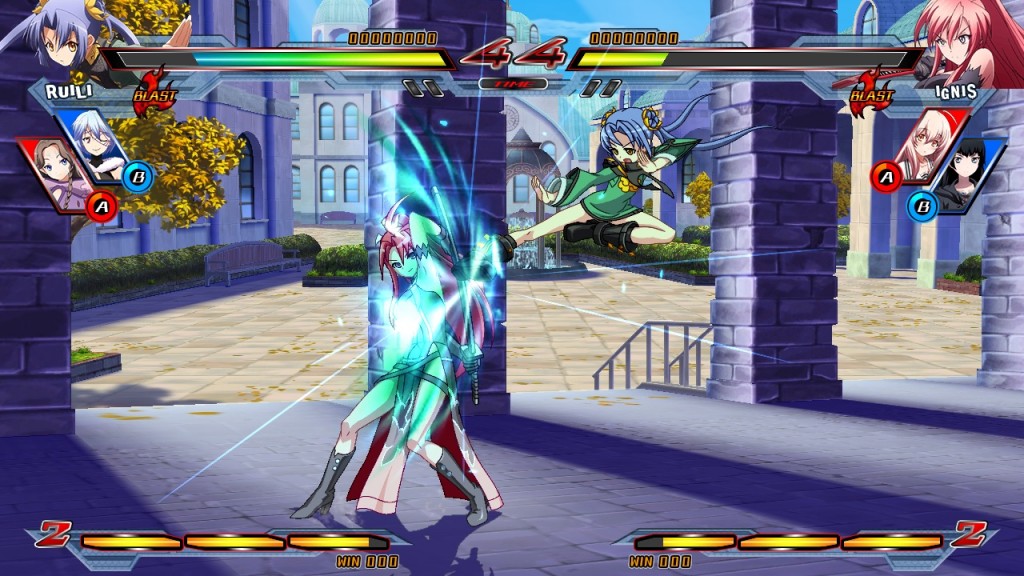 Okay, I'm going to pause right here because I'm sure readers of my past reviews may know my history with the character of Super Sonico, specifically her anime series (which I deemed one of the worst anime series ever made). While there is nothing that can be done to forget about such an abomination streaming on Crunchyroll, I can absolutely move on from that disaster and make my way towards a better perception of this character that has come into this video game. This is the absolute truth: Nitroplus Blasterz has somehow made Super Sonico a much better and likable character, and thanks to that I am okay with her being in existence.

Moving forward with the review, the main storyline is sorta your average paint-by-numbers affair you've come to expect from these crossover fighter games. Your character bumps into another, either a misunderstanding or a thrown punch occurs, they fight, and then you move on to the next round should you succeed. We've seen this in practically every fighting game, but fortunately both the charm and the personality of all these characters helps to make the tale all the more enjoyable. What's more: when you beat the story mode the first time around, another one unlocks for you to behold. 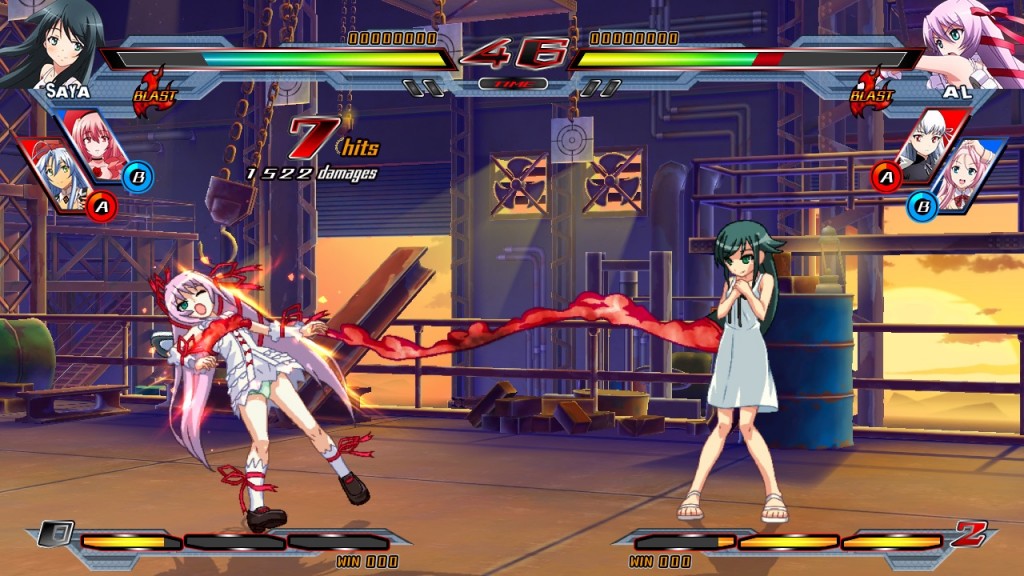 Told in a style similar to that of the Persona 4 Arena series this particular tale takes place in the fictional town of Arkham City, Massachusetts, as the Nitroplus characters try to figure out the mystery behind the murder of the city's young mayor and his friends. Surprisingly, it knows how to keep you guessing as to who is behind it all, not to mention the plethora of Lovecraftian homages that fill the story with references to necromancers and vampires. Despite some deus ex machina tropes that come towards the end of the tale, this mode was highly entertaining thanks to both its writing and voice acting performance.

So the stories are great, but what matters most is the actual fighting aspect. Fortunately Nitroplus grabbed themselves Examu, the same folks behind Aquapazza: Aquaplus Dream Match. What they were able to do with that game was implemented superbly here in Nitroplus Blasterz. For one jumping onto the battlefield with all these new characters felt strikingly familiar, with little-to-no learning curve needed if you are familiar with these kind of games. If you know how to punch, kick, and toss your opponent in any other fighter, you'll be able to do so here without fault. With that being said depending on who I was controlling, I found myself switching between control stick and D-pad to move my character, as some of them seemed to move a tad sluggish than others. 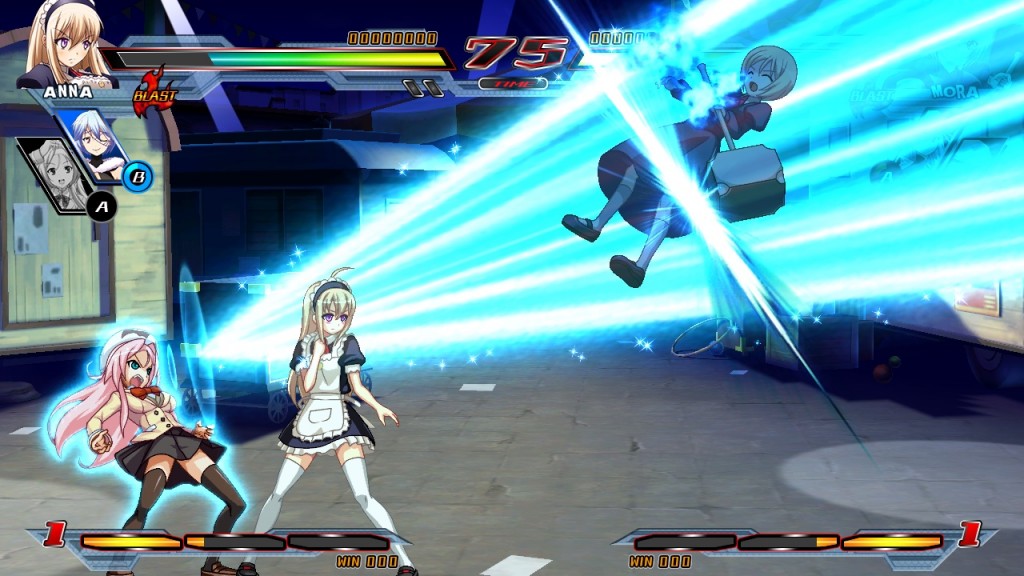 Yes, being familiar with a game's technique is good and all, but what makes the great fighters stand out from the bad ones is its presentation. And holy crap, does this game present itself well! You'll have your run-of-the-mill hand-to-hand combat types and those with swords and other weapons, but then you'll have someone like Ouka who'll overpower her opponents with her massively floating crucifix or Saya's usage of super-flesh smashing from below the stage. Then you have Super Sonico, who has her pet cats kicking more ass than Halle Berry in that godawful Catwoman film. (As you can probably guess, this is a big reason why I have forgiven Super Sonico for what she has done in the past.)

The characters in Nitroplus Blasterz are brought to life in a very anime-esque manner, with expressions ranging from the adorable to the grimly defeated. It's wonderful seeing how a video game can capture the look and feel of an anime in digital form, and considering what Examu was able to accomplish in the past it comes as no surprise that their track record continues to reach extraordinary levels. Even the hand-drawn backgrounds featuring various areas from the Nitroplus universe look gorgeous. This comes in fully throttled when you watch someone like Ignis lay upon blow after blow on her opponent with her multiple strikes, as the animation quality of the attacks are nearly just as good as anything you've seen in a Fate-based series. 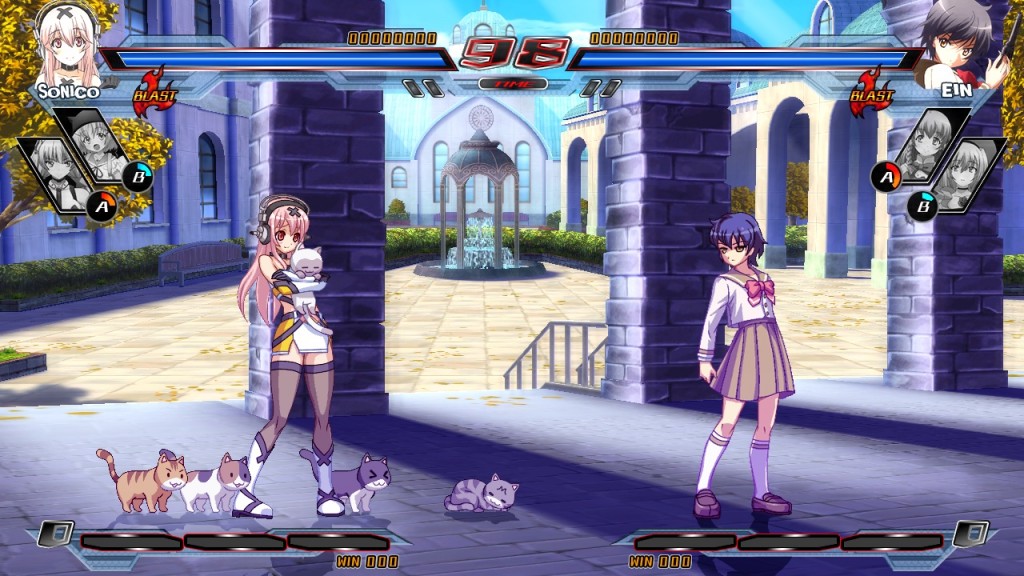 The story mode will take you around thirty minutes to complete with each fighter, totaling up to roughly seven hours in order to see every character's tale. It's alternate story will take an additional 3-4 hours to finish up, depending on how fast you can read. Once completed, you can continue to gameplay with online modes that can cross -play with both PS3 and PS4 versions of Nitroplus Blasterz. My time online had little-to-no issues, with its performance level acting steady and controls reacting without any noticeable delay.

Capcom's latest fighter may be around the corner, but Nitroplus Blasterz: Heroines Infinite Duel manages to toss the more iconic brand to the back seat, taking the wheel for hours of fun and fighting goodness. With a great selection of characters and cool support ones to boot, XSEED Games' latest is just another fine example of how the publisher has become the home to the most badass (and cute) women in gaming. Plus where else are you gonna see a bunch of kittens layeth the smackdown on some pitiful fools?! Put Nitroplus Blasterz on your fight schedule, plain and simple!