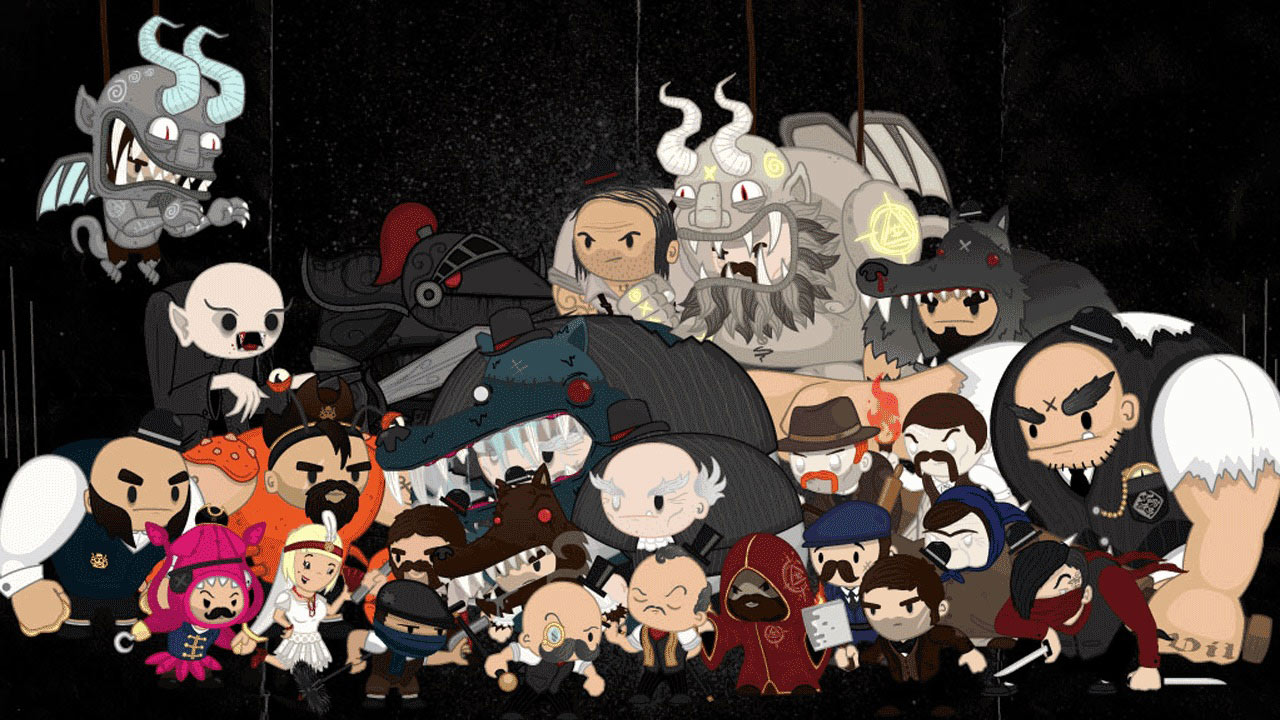 As a lover of the theater realm, I can be a bit of a sucker when the stage invades the video game scene. Whether it was Super Mario Bros. 3, Puppeteer, or the musical scene in Saints Row: Gat Out of Hell, the mixture of gaming mechanics and a Broadway mentality somehow always puts a smile on my face. When I got word about Mediatonic's Foul Play, a game within a play, I'll admit it got me very excited. Alas, after spending time with it I began to feel like Blackadder when he finished reading through Shakespeare's five-hour draft of Hamlet.

Foul Play has one or two players taking control of the two characters in the show. Daemon hunter Baron Dashforth is reminiscing about his past adventures with the audience. With his trusty sidekick Scampwick the two embark on mysterious adventures as they battle mythical beasts and vampires, as discover what may have happened to the Baron's father. As you play, you must keep the audience at bay with some impressive combos and takedowns, for if the audience isn't pleased then the curtain will drop early on the Baron's show. 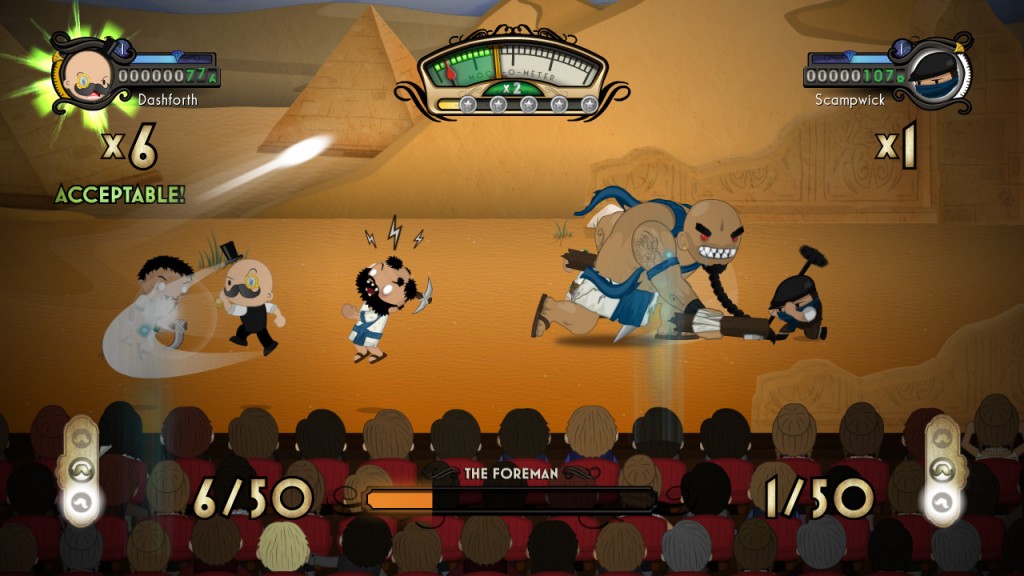 Early on in the game I began to notice some glaring issues with the game. For one, the story doesn't so much as pull you in as it does drop you on the Baron's hunting room floor. That wouldn't be much of a problem, had it not been for the fact that Dashforth's method of storytelling tend to be rather drab. As hard as I tried, my brain just could not get invested in the Baron and Scampwick's tales of daemon hunting. From both a gaming and theater perspective, that's a red flag in my book.

Throughout the majority of Foul Play you'll be simply moving from one part of the stage to the next, fighting monsters, angry workers, and the occasional renegade stage hand. This means that at just about every moment of the game you'll be button-mashing and appeasing the audience with some neat tricks and high-numbered combos to earn you points and -- in some cases -- one of the three trophies that are awarded at the end of each level for completing a specific achievement. It's frustrating, then, that this is the kind of button-mashing video game that will leave you with sore thumbs by minute five of the game, forcing you to stop playing for awhile and jump back into the game once the pain is gone. 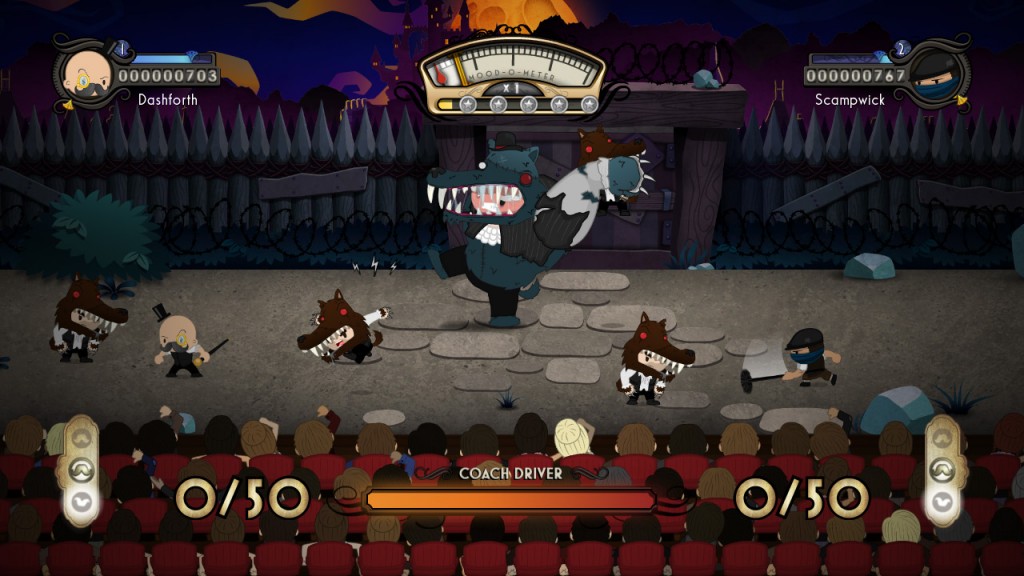 As someone who is used to the arcade brawling button-mashers -- with Scott Pilgrim Vs The World: The Game, Castle Crashers, and Phantom Breaker: Battle Grounds being some of the better ones in recent memory -- it's a sign that Mediatonic expected far too much from their players when the pain reaches a breaking point early on. During one battle in Act 2 with a pack of werewolves I found myself having to switch between thumb, index, AND middle fingers to fight so as to not hurt myself during the play-through. I can imagine that if someone were to walk in on me while playing this title, I probably would've looked ridiculous having the controller on my lap as I pressed away with my lesser-sore digits. Needless to say, it was kinda hard to enjoy myself when I started cramping up early on.

One of the pluses that Foul Play has when completing a level is that you may learn a new move or combo that can help to make the journey less painful on you. These combos can range from parrying techniques to some fun tuck-and-rolling attacks that can lay a blow on more than one enemy at a time. From time-to-time you'll also grab an upgrade that can help to lay extra blows or have the audience be more forgivable to you when you mess up during a fight. However some of these upgrades -- which you can use two at a time -- can be given to you a bit too late in the game, rendering their usefulness whittled down to the bare essentials. 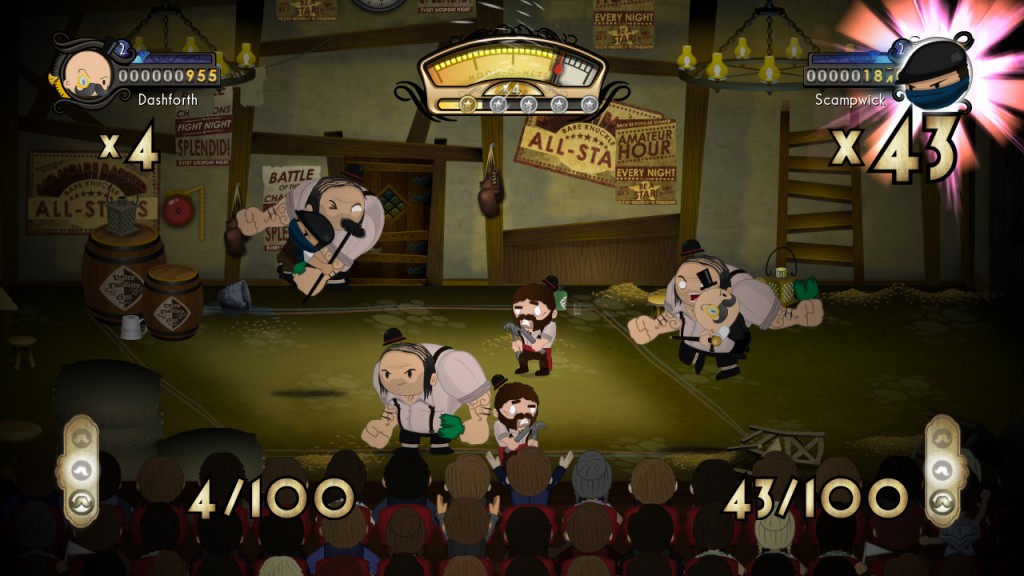 I'll admit that I rather do like the cartoonish look of the game, as it had this sort of childish charm that attempts to make the worlds seems more whimsical. Also fun to catch are some of the technical errors that happen throughout a play, be it a janitor that forgot to move out of the way or an actor stuck in a tree. It's some nice details that help to block out some of the blandness the story seems to slap across your face.

You can complete Foul Play in a first run-through in around 5-6 hours, and that's if you don't take breaks in-between intervals. Players can go back and replay levels at different difficulties, as well as attempt to achieve all three goals set in each act.

Foul Play is one too many white-on-white paintings shy of a Yasmina Reza masterpiece. Although it has its moments when playing with a friend, as a solo fare Mediatonic's feels bland and somewhat uninspired. If Foul Play was ever transformed into a theatrical event, I'd doubt that it'd survive past the previews stage.

GAME REVIEW | The Guest Checks You...