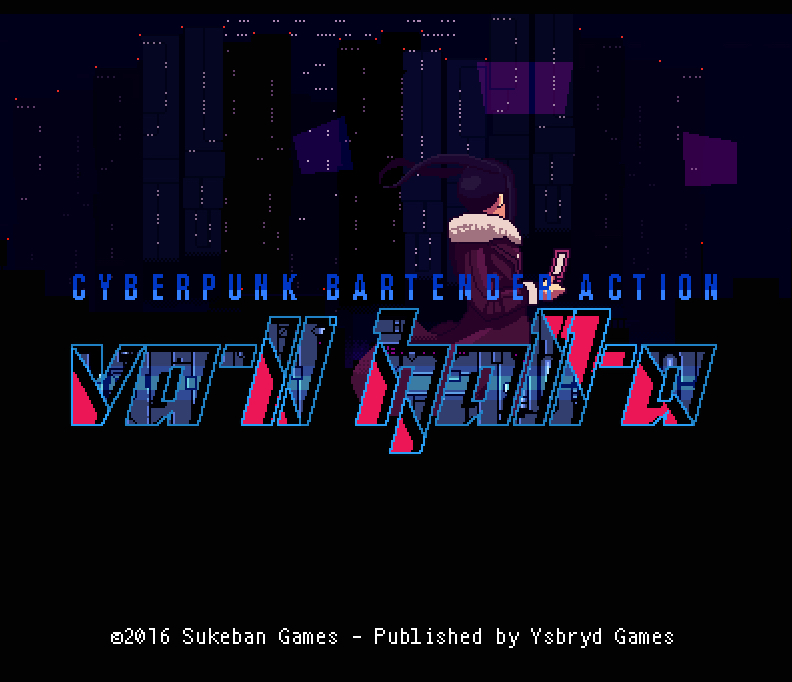 For years, Japan has put out tons of visual novels out on the market, with a plethora of them using sex or some other kind of lewd thing to "help" sell their title. Sometimes it works, other times they just wind up being an excuse to see 2D characters bumping uglies and having no redeeming qualities thereafter to fully experience it. VA-11 HALL-A: A Cyberpunk Bartender Action shows that you don't need any sort of visual eroticism to enjoy these sorts of games; in fact, with just this one title, Sukeban Games have put the entire visual novel realm on notice.

Created by just a couple guys in South America, VA-11 HALL-A takes you to a somewhat dystopian future and places you on a well-worn barstool inside a tavern. You play as Jill, a woman who is trying her best to forget her past and try to get through her daily grind of serving drinks and listening to the patrons tell their tales. It's a lot like Cheers, only instead of being surrounded by your average joe schmos, you'll come across the likes of robot pop stars, talking dogs, and the occasional gay biker boy. How you serve them will affect the way their storyline goes with you. 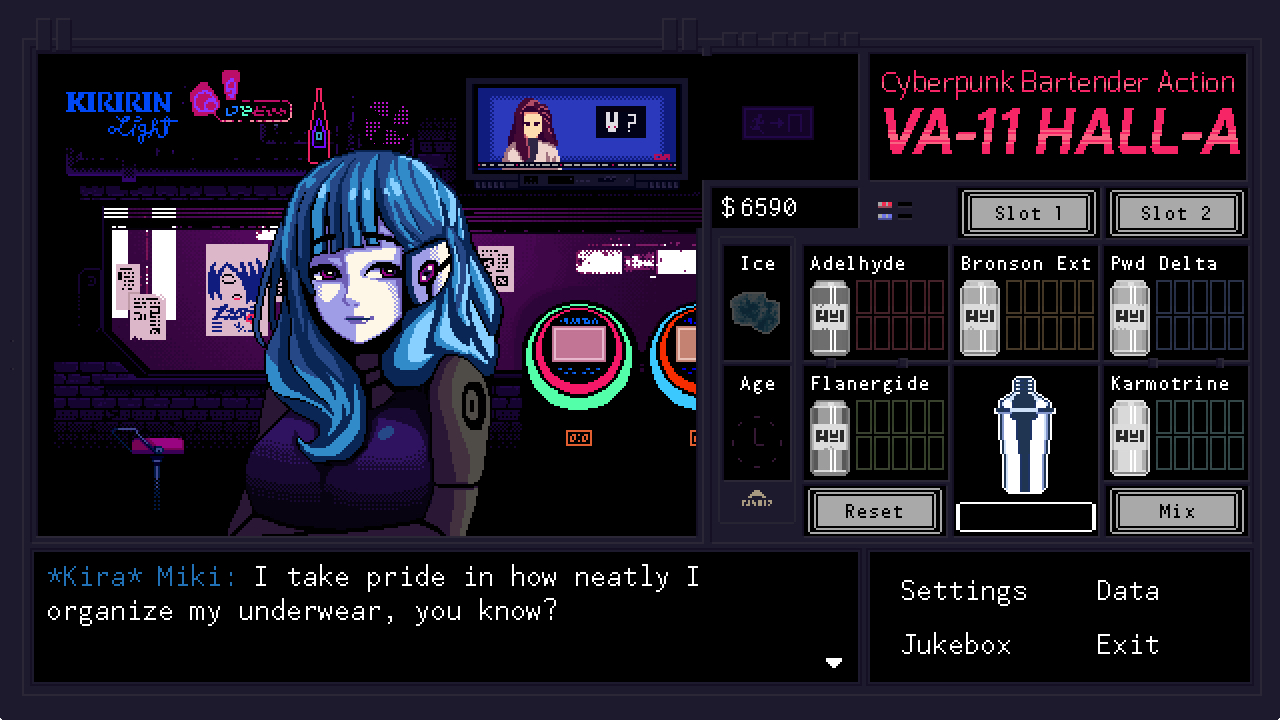 As you start to chat with the patrons, you'll be asked to make them a drink. Using the five ingredients and the handy instructional book, you can create a concoction that'll be rather sweet or kick the customer square in the throat with its bitterness. On occasion you'll have to look at their tells to see if what they ask for is what they truly desired, or if they are in great need of something else. (It's also best to pay attention to these customers, as they may order "the usual".)

The character of Jill goes through many different life-changing experiences as the story goes on. She's trying to forget her ex-girlfriend Lenore, all while the infrastructure of the city is on the verge of collapse due to people rebelling over the White Knights (one of whom, Sei, is a regular customer in your bar). Tragedy, comedy, and the in-between realm of both occur on her watch as the owner Dana keeps close tabs on both your well-being and the bar's. How fortunate that -- even in the darker parts of the game -- you're treated with an amazing bunch of characters. 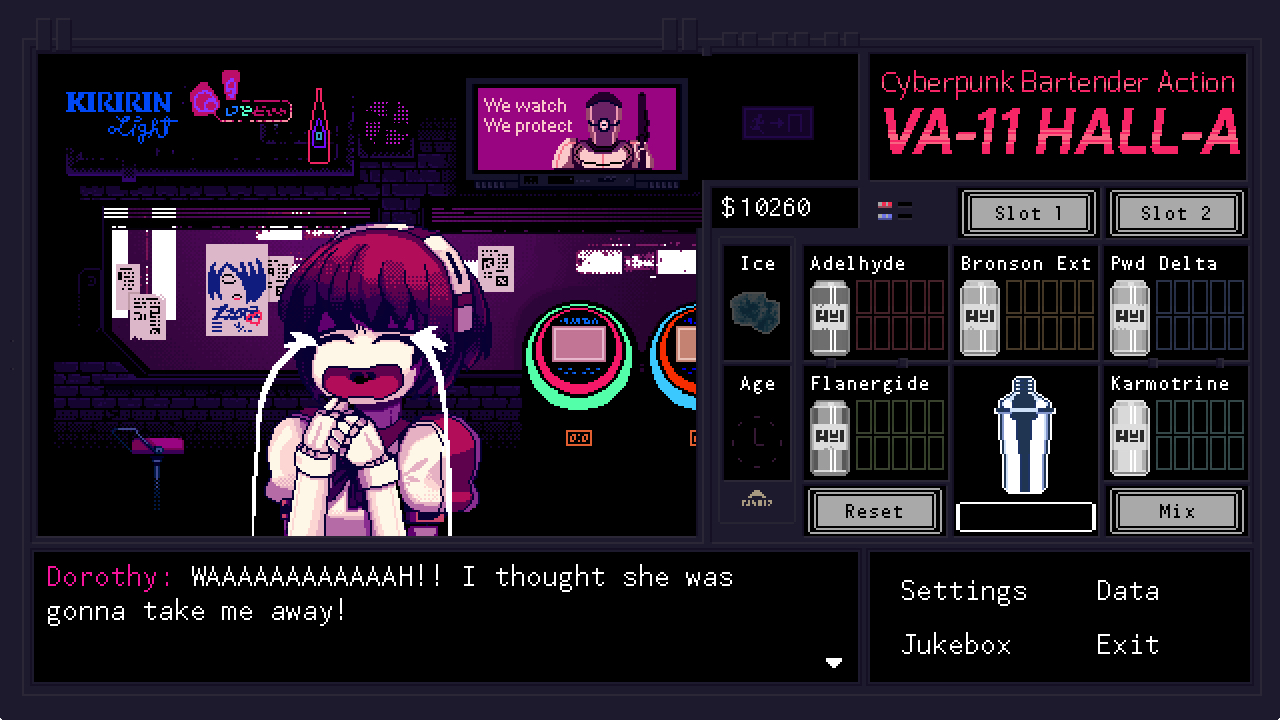 Both Dana and your co-worker Gil are filled with such yin and yang personalities, the former being very open and there for a hug when needed and the latter a more on the chill side but ready to spout some wisdom for your sake. There's the adorable sex bot Dorothy, who's quick with a joke and some of the game's best dialogue featured throughout its storyline. (She is also probably the most positive portrayal of someone in the prostitution business in any form of fiction.) There are also cat-eared girls, a video streamer straight out of NicoDouga, a nod to one of game critic Jim Sterling's early characters, and talking dogs that wear Hawaiian shirts because why the hell not!

I've never felt such deep character development showcased in a video game quite like what VA-11 HALL-A has done here. Every person or animal you meet is memorable, with even some of the more scummy characters having a certain kind of charm that makes them likable. Writer Fernando Damas has found a way to bring a level of real human emotion into these game characters, in a similar way Mamoru Hosoda has done with his films Wolf Children and The Girl Who Leapt Through Time. You know these are 2D characters that don't exist in real-life, but they feel more like actual people than most Hollywood film characters do. 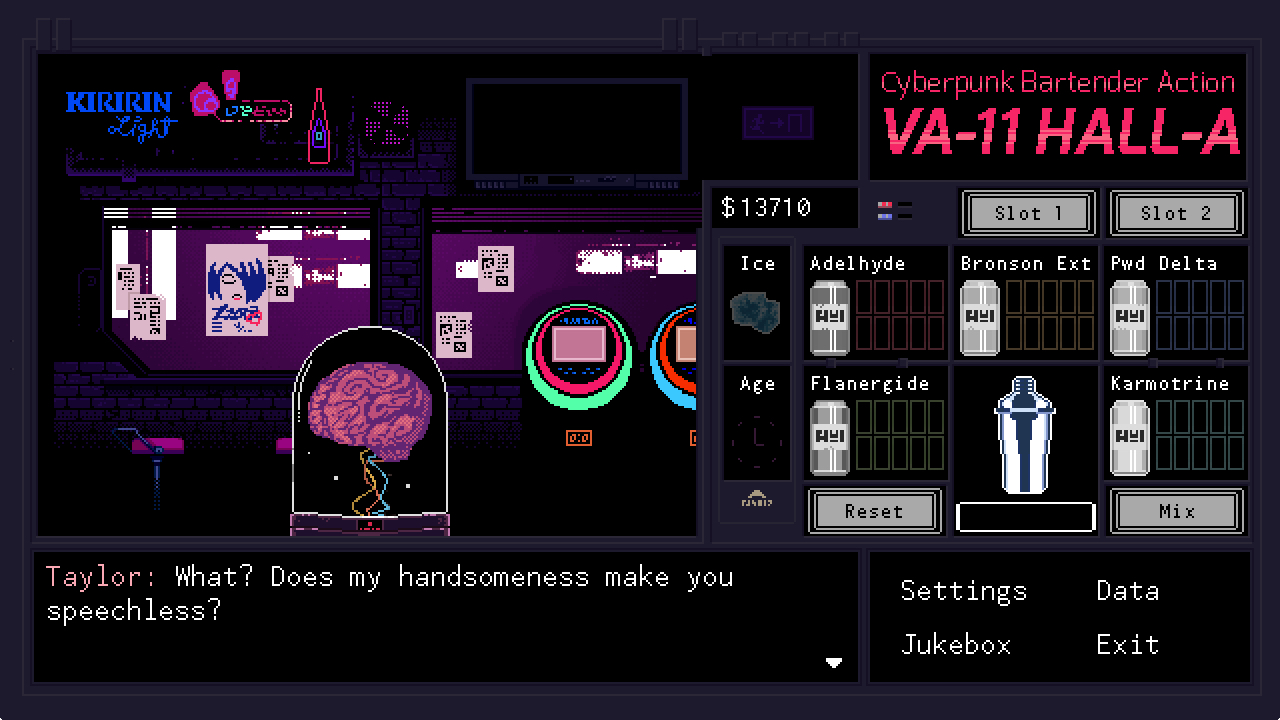 Most of the game is spent listening to these patrons and making their drinks, which is to be expected from a visual novel. This is a bar that could be placed somewhere in the same universe as Deus Ex or Shadowrun, so of course we won't see the crazy shootouts that occur in those games happen here. VA-11 HALL-A is where those characters go when they need to put down the gun, down a couple Bad Touches and Sugar Rushes, and worry about the real mundane parts of their surrounding world. For it to be presented in such a warm and magnificent light, one must commend Sukeban Games for a job well done.

Another great character in the game is its soundtrack. Composed by Garoad, the sounds you can choose from in your jukebox are breathing with such vibrant beauty and an extra dose of ambience. It's on the verge of being this year's best gaming soundtrack, and provides a great source of sound for any dark afterparties. (Check out the soundtrack here on Garoad's Bandcamp.) 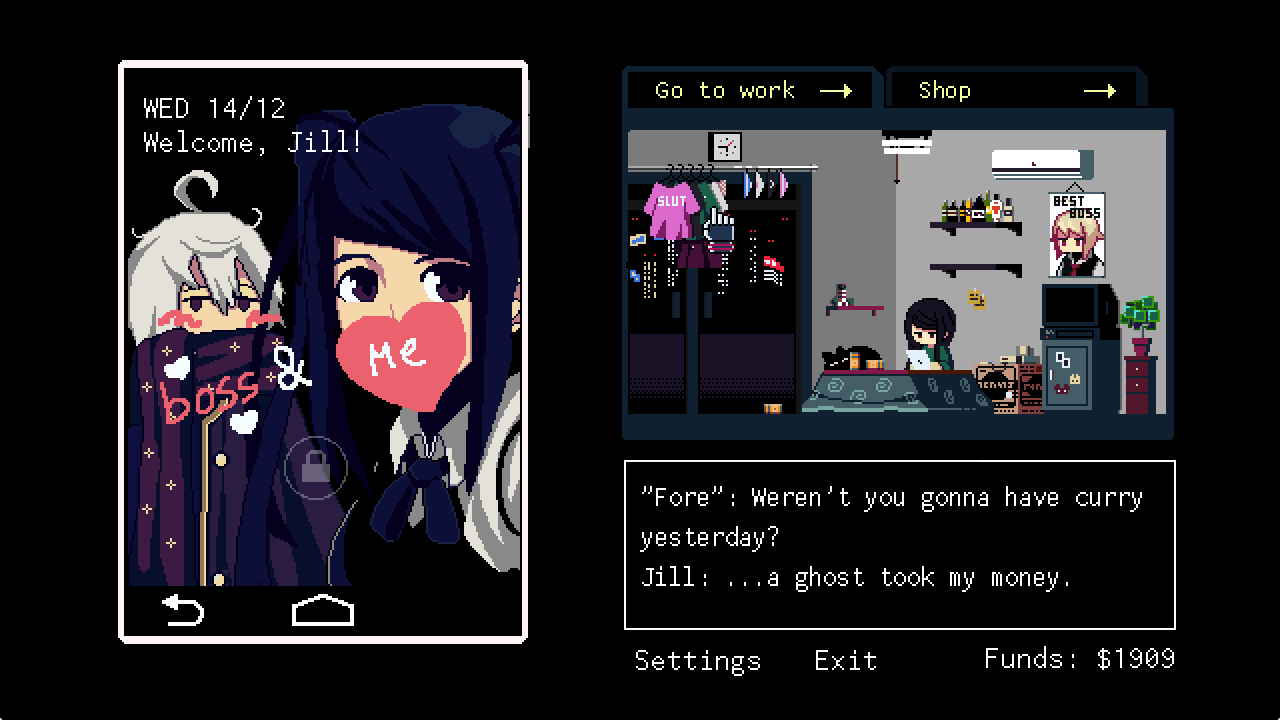 Your first run-through of VA-11 HALL-A will take roughly 10-12 hours to get through, but with six different endings to go through there are multiple reasons why you should revisit this seedily friendly bar. Plus it's absolutely fun to play around and see what happens if you mess up a drink order or tick off the wrong patron. (Although it's not quite fun to miss a rent payment like I did, but at least a regular wound up watching over my cat and I.)

NINTENDO SWITCH REVIEW UPDATE (August 28th, 2019)
An incredibly strong transfer from PC to the Switch, VA-11 HALL-A shines just as brightly as it did back when it was first released. Not only does it graphically look beautiful, but how it plays on the Switch is even better than it was on PC/Mac. You can either use the touchscreen when playing portably, or use the Joy-Cons to flawlessly maneuver through ingredients and dialogue elements. A great bonus to the Switch version is the inclusion of its original PAX demo, as well as a three-part prequel that will give you the insights on what happened at the corgi party Jill kept talking about.

Buy VA-11 HALL-A. Don't hesitate, don't give it a second thought, and don't look past it because you might not be into a visual novel. Trust me: you won't find a better story, a more relatable bunch of characters, or an atmosphere that's as charming in any form of entertainment quite like what Sukeban Games has created. VA-11 HALL-A: A Cyberpunk Bartender Action may be the greatest visual novel ever conceived, plain and simple.