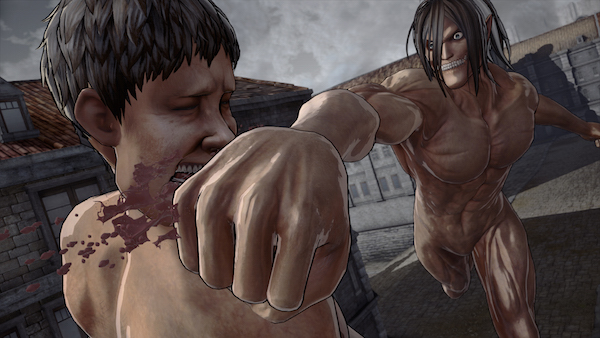 Admittedly being a fairly casual fan of anime, Attack on Titan managed to be big enough to capture even my attention when it came over here. The way the characters move when they battle and the mysteriousness of the giant naked titans dominating the world is an intriguing premise in itself. It's one of those shows that just seems ripe for a video game adaptation, so you can put yourself in the shoes of the Survey Corps as they fight against the terrifying giants, slashing their necks as they swoop by using their Vertical Maneuvering Equipment. There have been many false starts on getting a good game, but it looks like Koei Tecmo may finally be giving us the game that will do the series justice.

Set during the first season of the anime, Attack on Titan has finely tuned the Vertical Maneuvering Equipment controls to reflect them on the show. Going into the tutorial, they start you off pretty simply, only asking you to go upwards. They slowly ramp up the difficulty of the maneuvers from there, until it feels like you have a cursory handle on getting around. If you've ever played any of the better Spiderman games, airborne movement felt fairly similar to that. Once you can get around a bit, they start you up on combat training, which adds an extra layer of difficulty into the mix. 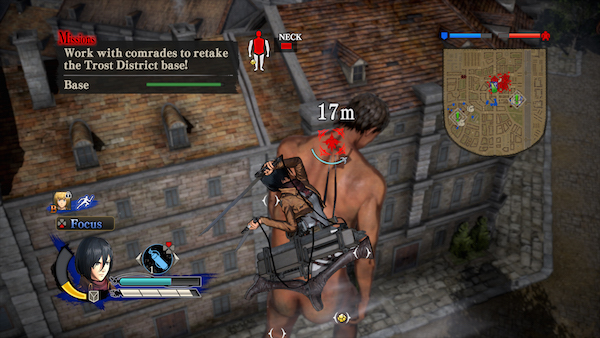 Just like on the show, being able to move around using the Vertical Maneuvering Equipment is a completely different story once faced with battling a titan. The added pressure of not getting caught adds a decent amount of tension and did a decent job of sucking me into the gameplay. Multitasking can be tough under pressure, kind of like patting your head and rubbing you belly with a gun to your head. It's this added difficulty that helps make it feel that much cooler when you start to get it down and are able to slice open those necks like a pro. All you need to do is latch onto a titan's neck, zoom towards them and slice at just the right time. Sounds a lot easier than it really is when you also need to focus on circling them above the ground.

The main protagonist from the series, Eren Yeager, eventually discovers that he can transform into a titan. This has also been worked into the game and they have created sequences where you get to control him in this form as well. Due to limited time, I didn't get to try this out, but I'm excited to see what they'll be able to do with it. 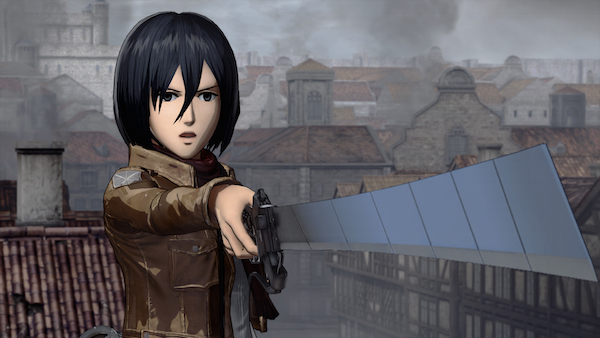 Cell shading, with each generation, has gotten exponentially better. The look of Attack on Titan does a fantastic job of capturing the feel of the show. At the same time, as a third-person action game, it offers a new perspective on the world to help bring the player into the desolated towns and lush forests of the anime. Even the sound design, from the lumbering titans to the rush of steam created by the Vertical Maneuvering Equipment, is expertly put together to bring you swinging into Attack on Titan.

Fans of the show have been waiting patiently for a faithful adaptation of Attack on Titan for some time now. It appears that Koei Tecmo has answered back with a well-crafted action game that will finally be able to make you feel like a badass swinging around and slaying some titans. As much as I will be screaming my head off trying not to get eaten, I can wait to put my skills to the test when Attack on Titan comes out on PC, PS4, PS3, Vita and Xbox One on August 30th this year. 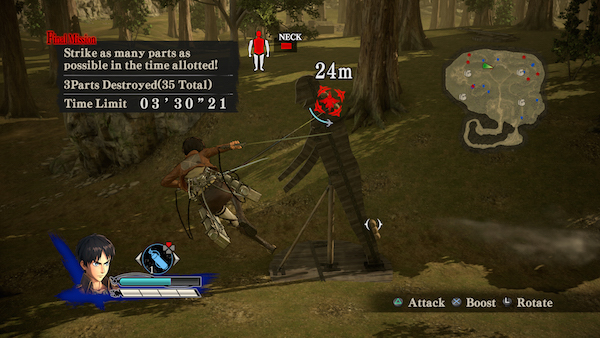 GAME REVIEW | A Rousing Toast For...