For the first time in 10 years, I didn't get to go to E3, but that didn't keep me from watching the pre-opening briefings. I got to watch all of them, at least in part.

Here are my observations of the E3 2-16 briefings:

Since I'm not much of a sports game fan, the only big thing for me to come out of EA was Battlefield 1.

I have never been a big fan of Battlefieldh, but after watching some of the multiplayer at the end of the briefing, I thought the game looked amazing. It was very well detailed — the graphics, the lighting, the shading, how fast it was running. It was very seamless.

I think that it will be warmly received. For the group is used to a more technologically advanced Battlefield game, like Hardline -- I think they will be drawn to this one. The mechanics are very similar. There’s the advantage of being set in the World War I era. Games that appeal to the nostalgia of war machines of the past tend to do very well. It’s a period piece. The audience enjoys shooters across history, not just modern warfare. Personally, I would be more apt to play Battlefield 1 than Hardline or any of the other Battlefield games because of it being set in the past.

How they approach taking down a big Zeppelin is different than in many games. Typically, taking down a big enemy results in taking down its giant carcass, its giant skeleton, and then it just disappears, leaving you a big space to get through. That doesn’t happen in Battlefront I. In this game, it causes collateral damage, just like any warcraft, when taken down. All the wreckage stays in place, and you have to deal with that wreckage. I respect that — I think it’s an interesting mechanic.

The fact that it's not historically accurate that Zeppelins are portrayed as terrible war machines is not important. The majority of people playing games are used to playing games built out of fantasy worlds. They’re used to things that aren’t based on reality. Playing fast-and-loose with history — people are used to that. At the end of the day, it’s a game, so if it amps up the excitement to portray the big behemoths as dangerous? The actual truth will not be a big deterrent for anybody picking up the game.

It’s hard to pick out one highlight to Bethesda’s presentation. I think the most surprising was probably Quake.

They did such a fantastic job revitalizing Doom, and it looks like they want to do the same with Quake. While I’m probably not going to play the game myself, I’ve watched a bunch of different YouTubers play Doom. While I’m not much of a rail-shooter, I do have the nostalgia of playing Doom, Wolfenstein and Quake as a kid on my uncle’s PC — watching the new version made me feel like a kid again. Their teaser for Quake looked fantastic.

All the stuff they were doing with VR was very interesting. I’d been on the bubble with VR for a while, but I liked their summing up the components of Fallout and having a VR version of that. It makes a lot of sense for these guys. It makes sense for Fallout 4 to have a VR experience.

I loved the first Dishonored game – I loved the voice acting in it. I didn’t actually finish it, because it got a little complicated for me — I was having some physical problems with my thumbs and my wrists at the time. But I have been looking forward to Dishonored 2. Just the things they were showing off with Emily – I like the timestep mechanic where you could use a device to see into the past and step through to that reality. It lets you bypass enemies and gather intelligence — the ability to learn about things in your environment. I just love that she seems to be such a strong, smart, bad-ass character. It’s really great to see more than just a handful of strong female and minority characters showing up in games this year. I really want to order that Collector’s Edition.

The biggest thing that impressed me was their focus on community. They are finally listening to us. For quite some time, I felt nobody was listening to any of the feedback they were getting. It was a lot of "We're going to tell you what you want. That’s why we made the console this way." What I wanted was the ability to connect with other players faster and easier. I like the updates and the changes they made to the SmartGlass application, which has become the Xbox app on the iPad — it's much more useful now, rather than just feeling tacked-on.

It was rumored that everybody was going to talk about their next boxes at the show, and Microsoft actually did. They showed up with the Xbox S. Having a more streamlined box makes sense. I like the fact that it’s smaller – 40 percent smaller. It’ll push 4K video as well -- a lot of people are moving to 4K TVs. What I was really impressed with was the price point at $399. It’s a good way to get anybody who’s on the fence right now to convince them that it’s worth buying. It’s not a bad box. There’s complete compatibility with the games you can play on the current Xbox One, which will be very important.

Ubisoft was where I started getting amped up about the show. Ubi had a line-up that, for me, was really exciting. I’ve been a fan of Ubi for a long time. They have a lot of games that I really enjoy. Anytime you give me more Splinter Cell, I'm going to be happier.

I already love the South Park: Stick of Truth game, so when they teased the Fractured But Whole follow-up last year, that won the briefing for me. So when they talked more in depth this year, I loved that. I’m super psyched.

I’m more interested in For Honor now that I’ve seen keeping into its actual gameplay. I had 15 minutes of hands-on last year, but this year’s version appears much more polished.

Sony, I think, won media briefings this year. Sony’s briefing had the least number of words of all the briefings. They talked little and just put up game after game after game. It was like Sony was saying, “Here are the games, people. Just enjoy them.”

They led with the God of War game. As rumored, we got an older Kratos with a son and definitely not Roman, but Norse gods. It looked fantastic and I immediately started desired to play God of War III again. Any time I have that feeling, it’s a good one. I was grateful to see Kratos hasn’t been abandoned. As long as this God of War game is brutal, and it looks like it’s going to be, Sony gets to take my money.

And the hits just kept on coming. On the podcast this week, one of the things I said I needed was a ship date on Last Guardian — and I got it: Oct. 25.

They had a couple of games I was not aware of at all. I had no idea that Insomniac Games was working on a Spider-Man game. It looks like a bunch of fun.

Then there was the Kojima game. I don’t play scary games, but, good lord, was that presentation unbelievable.

The briefing was the first time I got a really good look at Call of Duty Infinite Warfare. I’m not sold on it yet, but I’m getting close. I’m getting real close.

The fact that Crash Bandicoot is coming back — that’s going to move a lot of gamers who left the platform after the PS2 back to the PS4.

And while Star Trek Bridge Crew will be the reason why I get VR, the bonus reason will be Star Wars X-Wing VR experience. I’m going to get to pilot an X-Wing in space? Done! Sold! I’m buying it! Let me be a Jedi — I will buy your thing. I’m never going to space, so this will be the closest I will ever get.

And that's the perfect high note to end this overview of the E3 briefings. 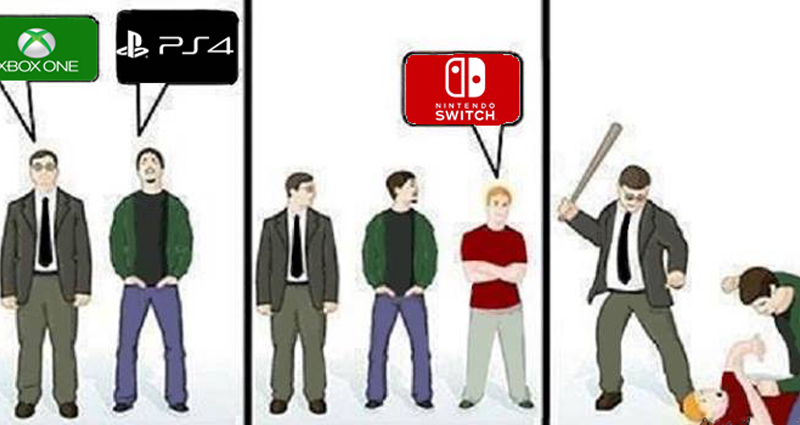