When playing something like The Legend of Zelda or Final Fantasy, we tend to overlook the little people of these worlds that help to push the heroes onto their journey. What of these non-playable characters that do their day-to-day tasks for the sake of the kingdom? A couple years ago, we saw into one of these NPC's windows with Level-5's clever and hilarious Weapon Shop de Omasse, showing what one can do when the spotlight is shone not on the hero, but a random merchant many heroes beckon for. This year, Nnooo has gone much deeper into the NPC realm with The Legend of Kusakari, a game about cutting grass.

I can imagine many of you are raising your eyebrows right about now. What's so special about telling the tale of a mere field worker? That's where developer Librage goes down quite the original route with The Legend of Kusakari. There are many heroes fighting monsters along the kingdom's battlefields, but they cannot fight adequately if the grass is thick and knee-high. That's where Shiba Kari comes in and does what he was born to do: cut grass like his life depends on it (which, in actuality, it does!). 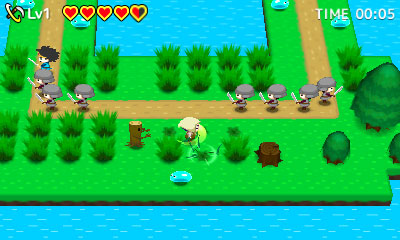 Playing as Shiba Kari, you are tasked to clear the fields with your scythe. Stop for too long, and your life starts to deplete, meaning absolute death if you find yourself too far away from the next section of grass. You must also steer clear of any monsters, ghosts, and even the heroes that are in battle, as bumping into them will take away one of your hearts. Do your best to clear the fields in time, and perhaps you'll be rewarded with something from the king.

The Legend of Kusakari may have the body of an RPG adventurer, but it's got the soul of a puzzler. As you play, you'll need to pay close attention to where the grass is located via the bottom screen's map. That's where you'll need to figure out a proper strategy to use your blade to cut the field's blades before you drop dead. Believe me when I say that -- just as it is in real life -- cutting grass is quite the chore to take on. Fortunately, there are a lot of reasons why you should stick around with this game. 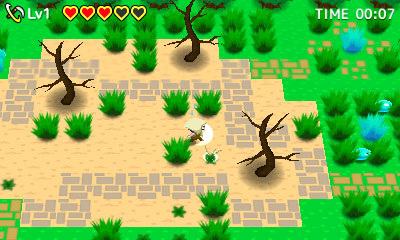 For one, its challenging gameplay works your brain like no tomorrow. On the surface, it starts off rather basic, with cutting grass as your character seemingly has done for many years. But once you dive into the meat of the game, you're then greeted with strange patterns, villainous monsters, and inadvertently bothersome heroes. It becomes a larger challenge on the whole as you fend off your everyday nuisances while performing your usual duties.

Its humor also helps to overcome more of the challenging aspects this game offers. The main silliness comes in the form of this man who's tasked to do his daily routine while the heroes of the land fight against the evils of the world. While Shiba cares about the fate of the world, his main concern is cutting grass. (Granted, it would've brought an extra dose of humor to the game to see him fight a monster with his scythe once in awhile, but that's not what the game is all about.) There's also the audible goofiness The Legend of Kusakari delivers, especially when it comes to a very overexcited (and untalented) trumpet player. 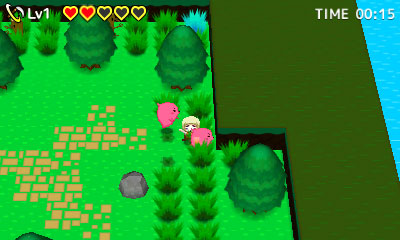 Control-wise, it's a cinch to play this game. Cutting regularly or performing the spin cut comes rather easily, but it's when you combine it with the dash maneuver when you can master the art of the mow. However, I've found on many occasions that attempting this feat may result in the act of rushing things through, which -- from my experiences -- lead to running into monsters & heroes and costing one of your hearts. In laymen's terms, the game wants you to speed up your technique, but not push you to jump the gun too much.

Completing the main fifty levels of the game may take you roughly 3-4 hours to complete, with an extra ten levels afterwards whose difficulty level may have you rage-quitting on numerous occasions. After completing the game, you can attempt to replay all levels as you try to earn all the plants for its Green Thumb Almanac. An Endless Mode is also there if you need some time to kill, as you try to reach the top of the Online Charts to become the king of the grass-slayers.

The Legend of Kusakari is a surprisingly fun and challenging twist on a classic gaming trope. While its later levels may frustrate some, it's tongue-in-cheek humor makes it easy to stick around and take care of the lawn like you were destined to do. Besides, it beats actually having to mow the lawn in the real world.