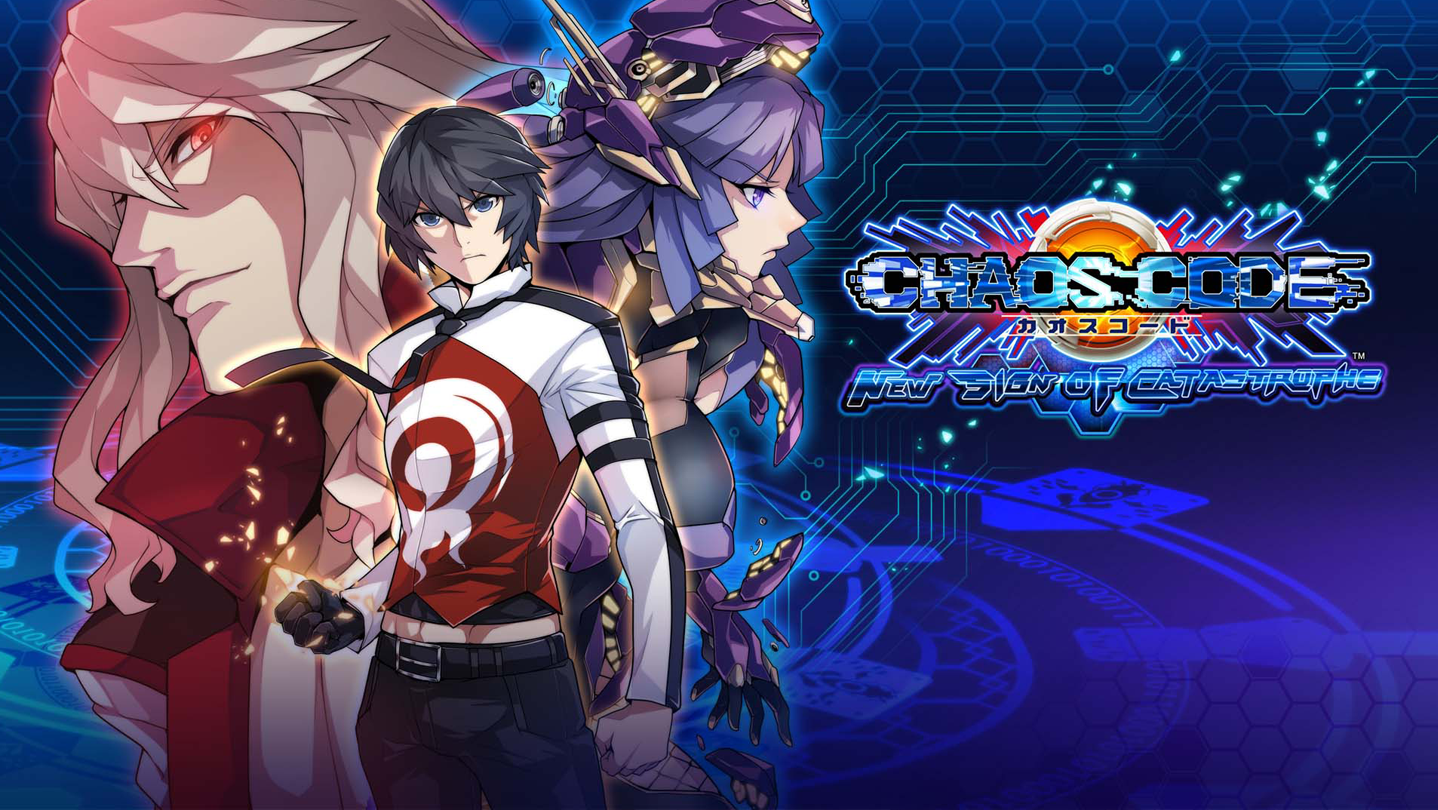 GAME REVIEW | A Good "Sign" All Around For Remastered "Chaos Code"

The PlayStation 3 saw a handful of under-the-radar fighting games. Some starred light-novel characters like SEGA's Dengeki Bunko: Fighting Climax, whereas Atlus brought over the stars of various visual novels (and a couple eroge) with the underrated Aquapazza: Aquaplus Dream Match. Out of all of those PlayStation-exclusives, none gave me a bigger smile on my face quite like FK Digital and Arc System Works' Chaos Code, a title with all original characters and some great fighting styles.

Given a second chance at notoriety (considering it's getting a sequel next year in Japanese arcades), the game has been brought over to the PS4 and PC under the title Chaos Code: New Sign of Catastrophe. Not only has the game been given a new coat of paint thanks to some remastering, but it also features some new features that were non-existent in the original. As the original Chaos Code was great all on its own, these new elements help to push the game to much higher level. 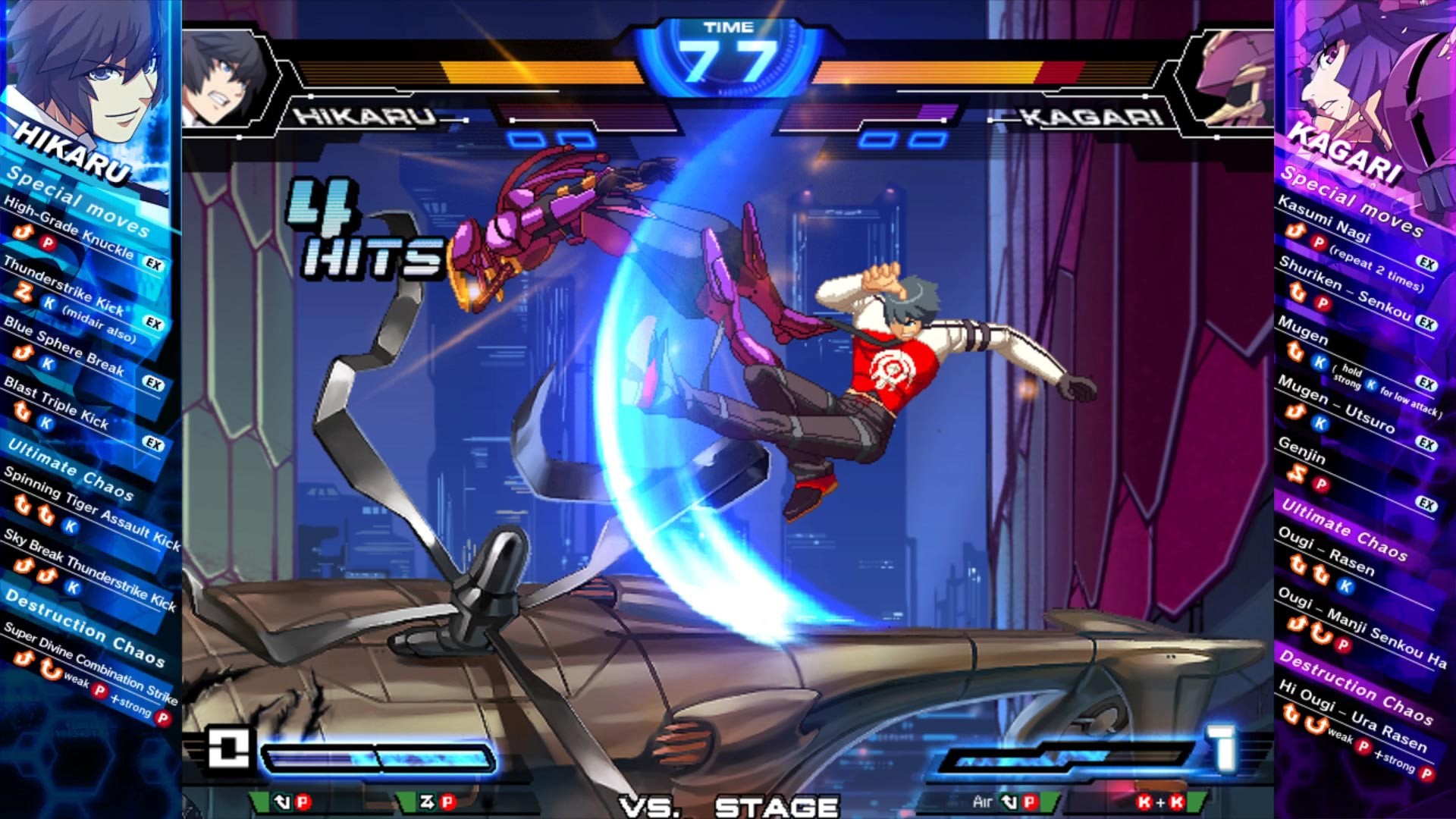 As it was in the first game, the story of Chaos Code focuses on a mysterious hunk of energy discovered by a Professor Tesla. Crafting a formula known as the "chaos code," Tesla was able to concoct a theory regarding unlimited energy. Of course, that leads to many organizations both good-natured and shady to want their hands all over it. And thus, the battle for the code began.

I'll admit that the story aspect of the game is the weakest part of the Chaos Code lore. With some storytelling holes here and there, it makes it hard to see why these people care so much about either stealing or protecting this energy. Even some of the characters in the game don't know why people want it; they're just there to fight for their own personal reasons. (There's also some spelling errors that were apparent in the PS3 version that still exist in the PS4 one, although not as bad.) While the story is a little bit on the meh side, it's the rest of what this fighter is packing that will keep gamers coming back for more. 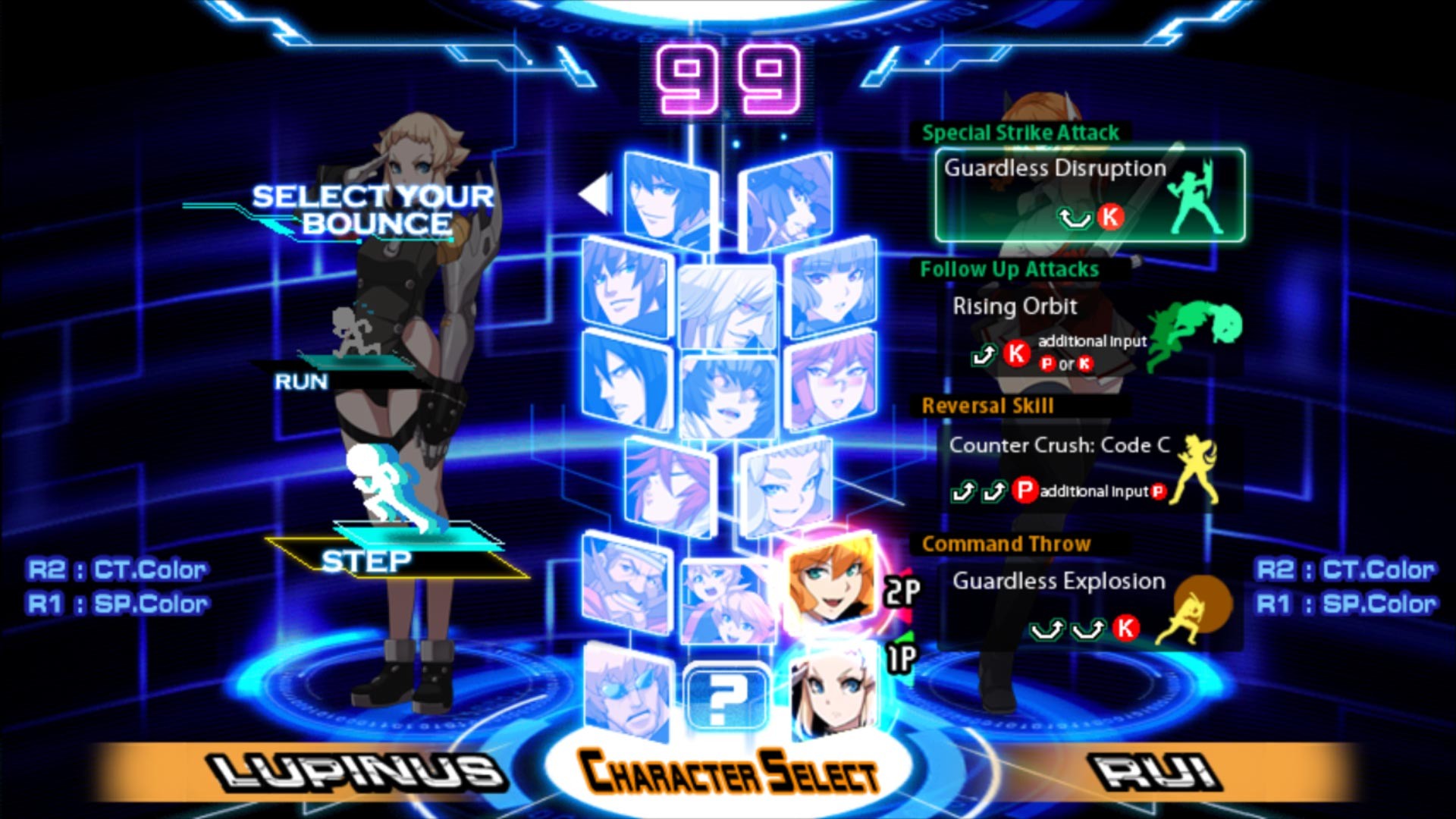 What makes this game fun is the fact that its sixteen fighters (two of whom are newcomers) are all filled with variety. The bro/sis team of Cait & Sith often act as one, using their sibling skills to defeat opponents; Catherine transforms from a merman and school girl to a horse-riding cowboy and kinky cat-girl every time he delivers an attack; Cerberus delivers smackdowns via his treasure-hunting techniques; and Bravo often combines the culinary arts with martial arts to concoct some delicious knuckle sandwiches in the literal sense. Perhaps the thing I appreciate most about this game is that the so-called "clone" characters (Hikaru/MG Hikaru and Celia/Celia II Kai) have their own different set of attacks that separate one from another.

All of these characters in Chaos Code are brimming with personality. Although they find themselves in a story that's a little subpar, it's what they bring to the table that helps to deliver a more memorable experience overall. Newcomers Ray and Lupinus also help to keep the story from completely faulting, with the former being an ex-cop that was investigating the incident and the latter a trained agent sent to spy on Hikaru (who also just so happens to be her crush). It knows when to have fun with these characters, and depending on which endings you get it all leads to some pretty laughable scenarios. 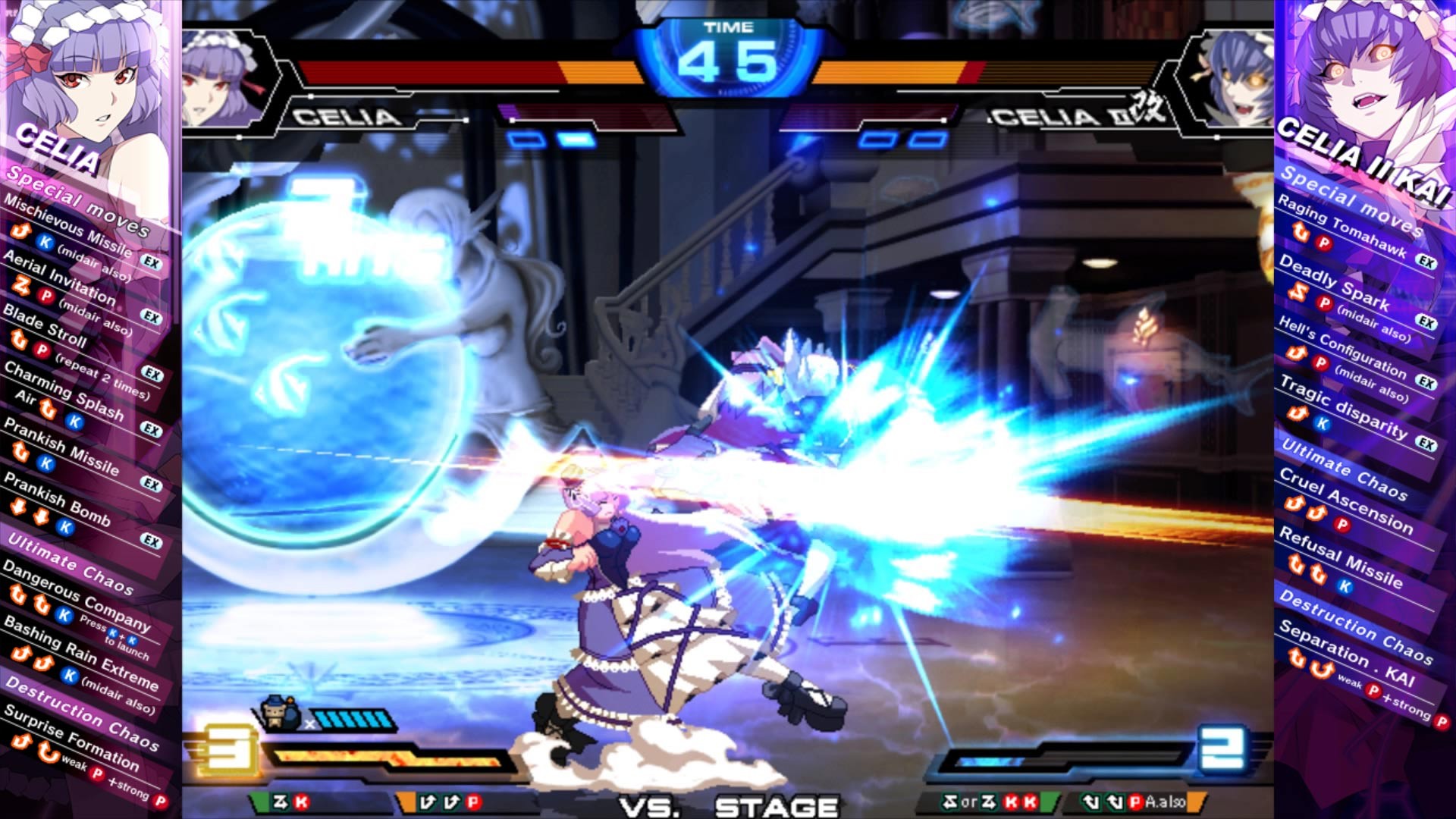 As you play, you will earn points that'll let you unlock new costumes, modes, alternate endings, and other goodies. One unique bonus comes in the form of the puzzle game "Rui's Farm," where you are tasked to grow & collect enough crops and match them up before it gets too overcrowded. It's quite nonsensical, but it plays well with Rui's country bumpkin personality that's apparent throughout her Arcade Mode. (Just be prepared to use a huge amount of in-game currency to unlock it!)

As fighting games go, the controls have more polish to them than most of the bigger-named titles. On a similar level to last year's The King of Fighters XIV, the means of using combos and initiating special attacks are presented in a way that's both challenging and easy on the fingers. Although you may find yourself button-mashing during the game's more harrowing fights, you'll be sure to find a way to initiate a special move when the time is right. The list of fighting movement styles grows with the addition of "Chaos" and "Boss," showcasing their own brand of whoop-ass techniques. 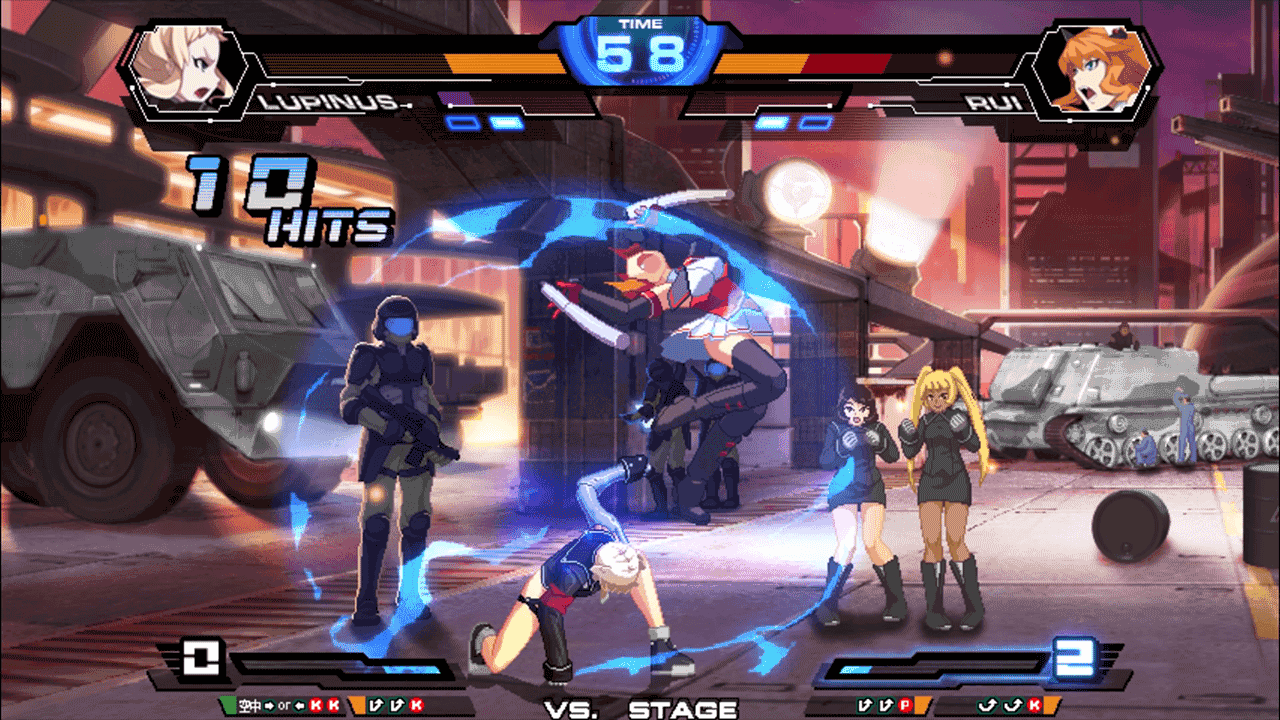 There's also a handful of new modes awaiting in Chaos Code: New Sign of Catastrophe. Survival mode has you fighting through endless fighters until you lose, while Score Attack has you attempt to reach the top of the PSN ranks via reaching the most points possible in a plethora of battles. Mission Mode is where your patience as a fighter is going to be tested the most, as you will be tasked to defeat opponents by using only a specific amount of skills. The few dozen missions showcased here start off easy, only to be slapped with some tough-as-nails conditions that'll drive some players completely bonkers with a bout of rage-quit.

Lastly, and most importantly, there's Network, an online mode that was surprisingly unavailable in the first game (despite some cries from its fanbase). Finding both ranked and player battles is rather easy, and as of this writing there appears to be little-to-no lag to be found while playing. Although it'll take a bit of patience to find a fighter on there right now, you will be rewarded with a smooth battle that will hopefully lead you to victory once you do.

It might've been overshadowed by others in the last-gen fighting genre, but Chaos Code gets a well-deserved retry on the PS4 and PC. Thanks to its fun cast of characters with their own unique set of moves, New Sign of Catastrophe points towards a brighter future for a game that outright deserves its own franchise. With the sequel coming soon, it feels rather imminent that Chaos Code will be on the same tier as the likes of Fatal Fury and Art of Fighting by decade's end.

Slime-San has quirky, old-school a...