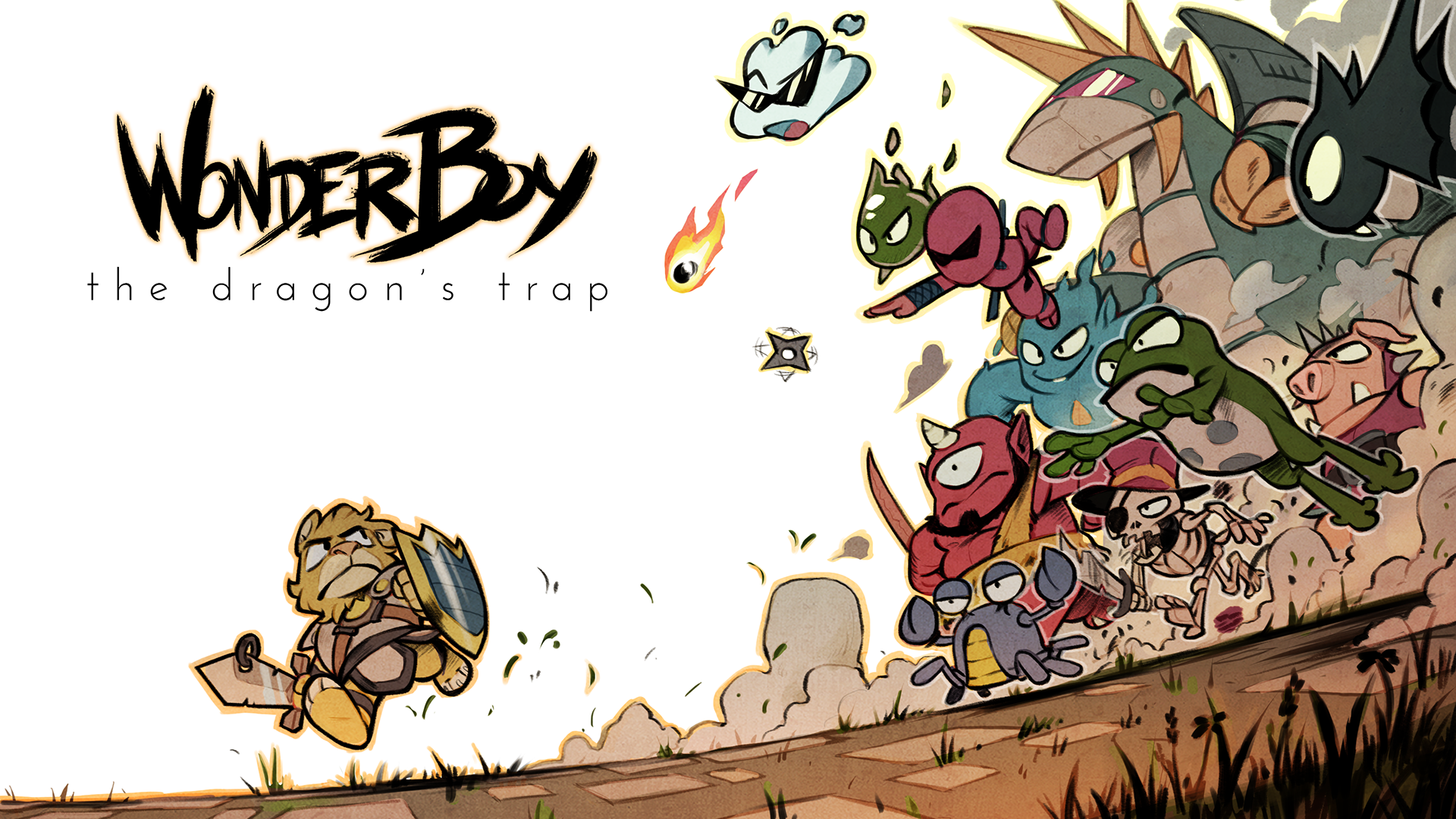 First appearing as a couple arcade titles in the 80s, Wonder Boy would finally get a home console release on SEGA's Master System via 1989's Wonder Boy III: The Dragon's Trap. While it got some critical praise, the game would fade from obscurity behind the shadows of Sonic the Hedgehog, ToeJam & Earl, and even Columns of all things! (Hell, I'd be deemed a liar if I ever claimed to know anything about the Wonder Boy franchise, it was that obscure!) However it appears it had its followers, especially those in the indie developers realm.

Enter French game developers LizardCube, who took Wonder Boy's console debut and revamped it with more than just a little elbow grease. Rather, these folks reverse engineered the original game's master code and gave it one massive overhaul! And thus, we have been given a prime example on how to properly redo an old-school video game. Take notes AAA companies, because this is gonna be a learning experience. 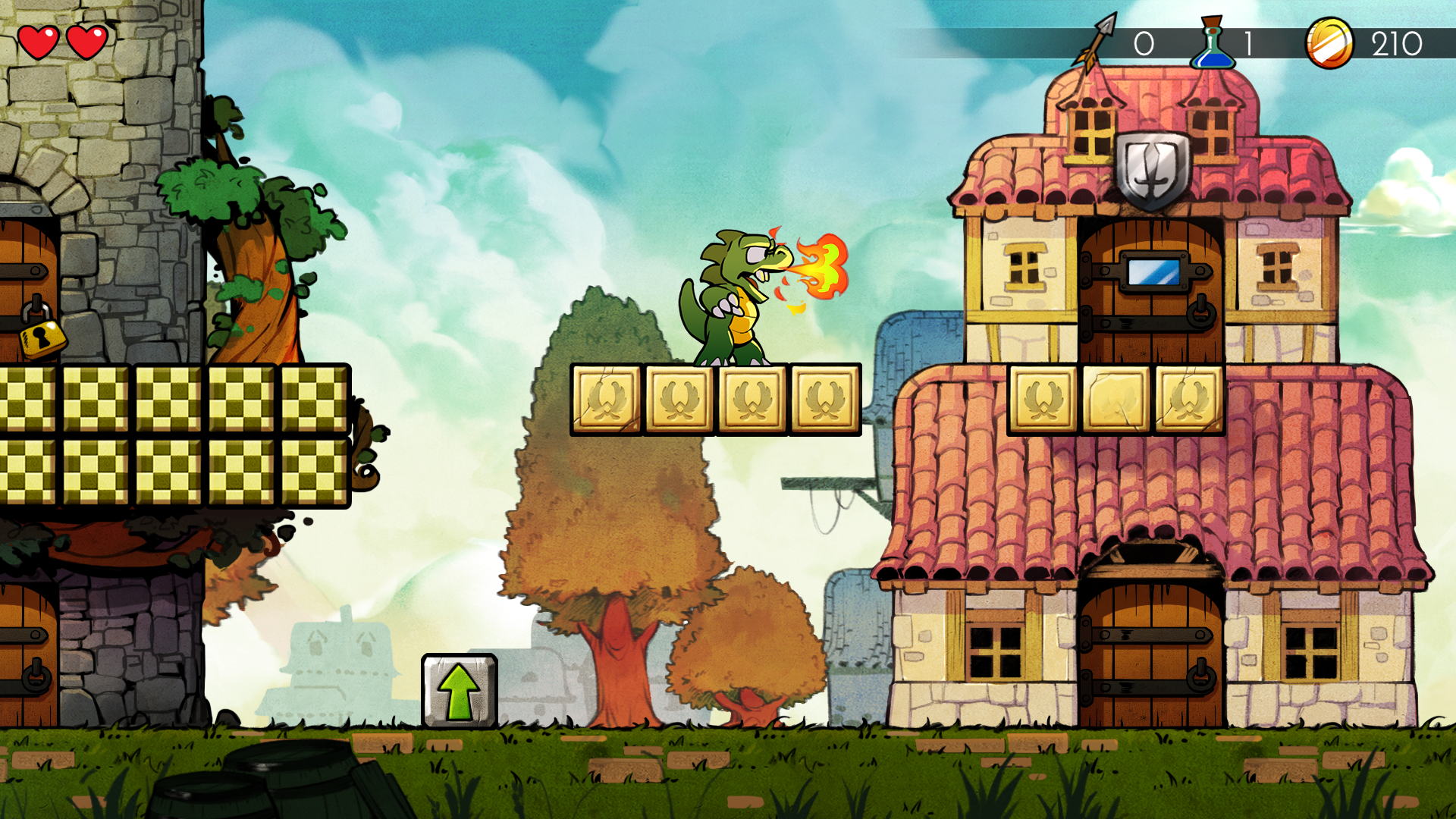 Wonder Boy: The Dragon's Trap has you start the game by choosing your Wonder Boy/Girl to head into your adventure. Upon defeating the Mecha Dragon, a curse is laid upon your hero and is transformed into a lizard. In order to turn yourself back into a human, you must traverse the world and defeat the other bosses, which -- in turn -- will have you switching through various other animal forms.

With each transformation comes a special ability. Lizard-Man shoots fire, Mouse-Man can climb walls, Piranha-Man can swim, Lion-Man can strike above and below his area, and Hawk-Man can fly. These powers will help you in order to find secrets and areas that other transformations won't let you get to, so it's always best to search all around past realms before going to the next one to seek out some well-needed secrets. As you play, you can also earn coins to upgrade weapons, shields, and armor, all of which will come in handy in specific situation. 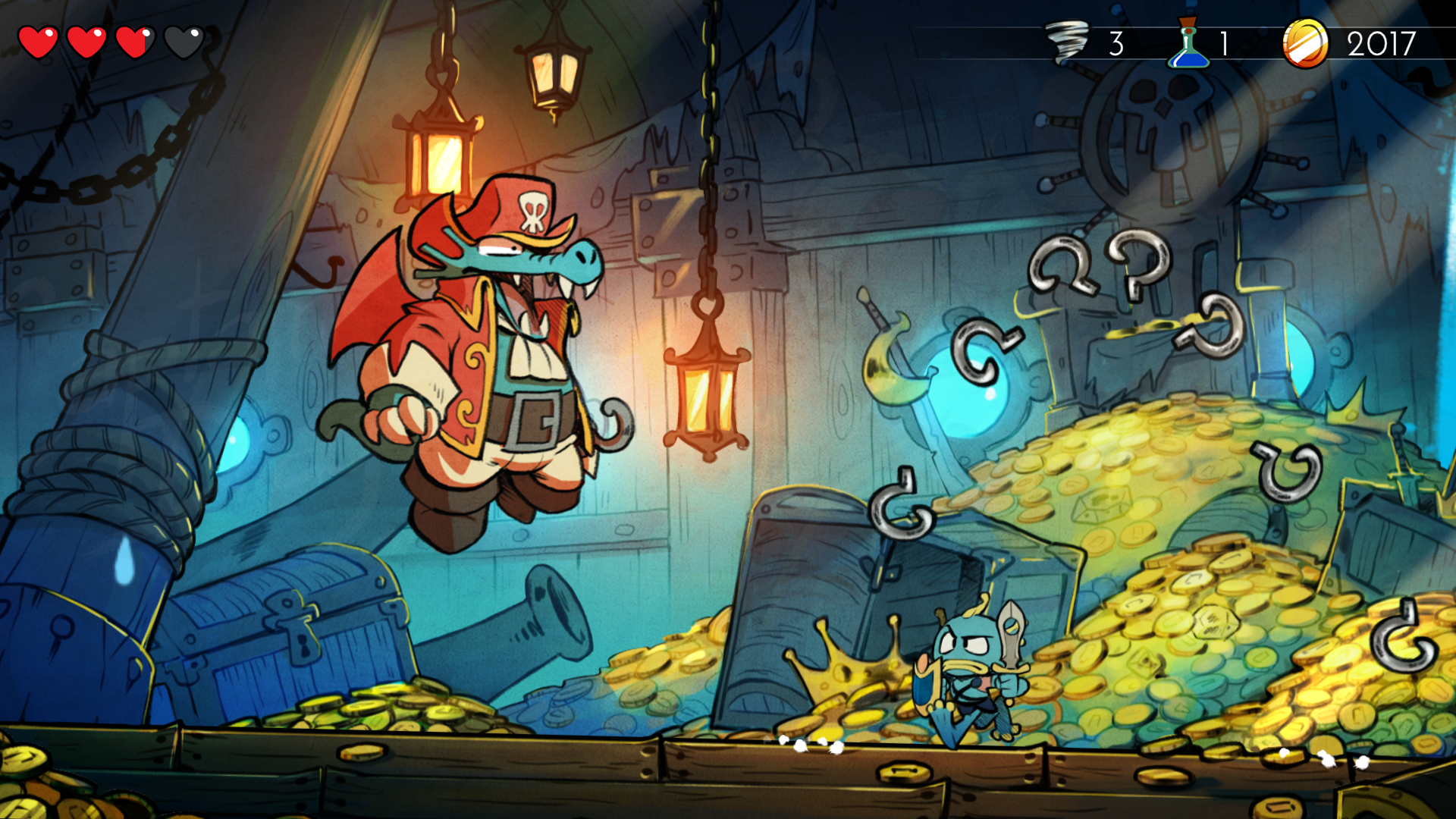 Even on its easiest settings, Wonder Boy: The Dragon's Trap is one tough game to handle. Enemies above and below can be quite the nuisance, with some requiring some timing to take them on. (Trust me: those jumping skeletons will piss you off to no end!) Everything has a strategy to it, but when you find yourself surrounded by baddies on all corners of the screen, you'll be forgiven for attempting to Leeroy Jenkins yourself out of a sticky situation. You can be revived up to three times if you have collected enough Life Potions, but if you die you'll be forced to go back to the town and start from scratch again. Thankfully all that you earned up to that point will still be with you, so at least there's that!

It's fortunate that the overall game experience is a joy to behold! Although I've never played the original, I got the vibe of a classic side-scroller adventure in a similar vein to that of Zelda II: The Adventures of Link and Castlevania. Each new power I discovered led me to run through past areas to see what I can find with it, with my searches resulting in more gold and other goodies. Even when things got a little frustrating, the mood Wonder Boy was brimming with made me solider through to find the proper solutions to these tougher areas. 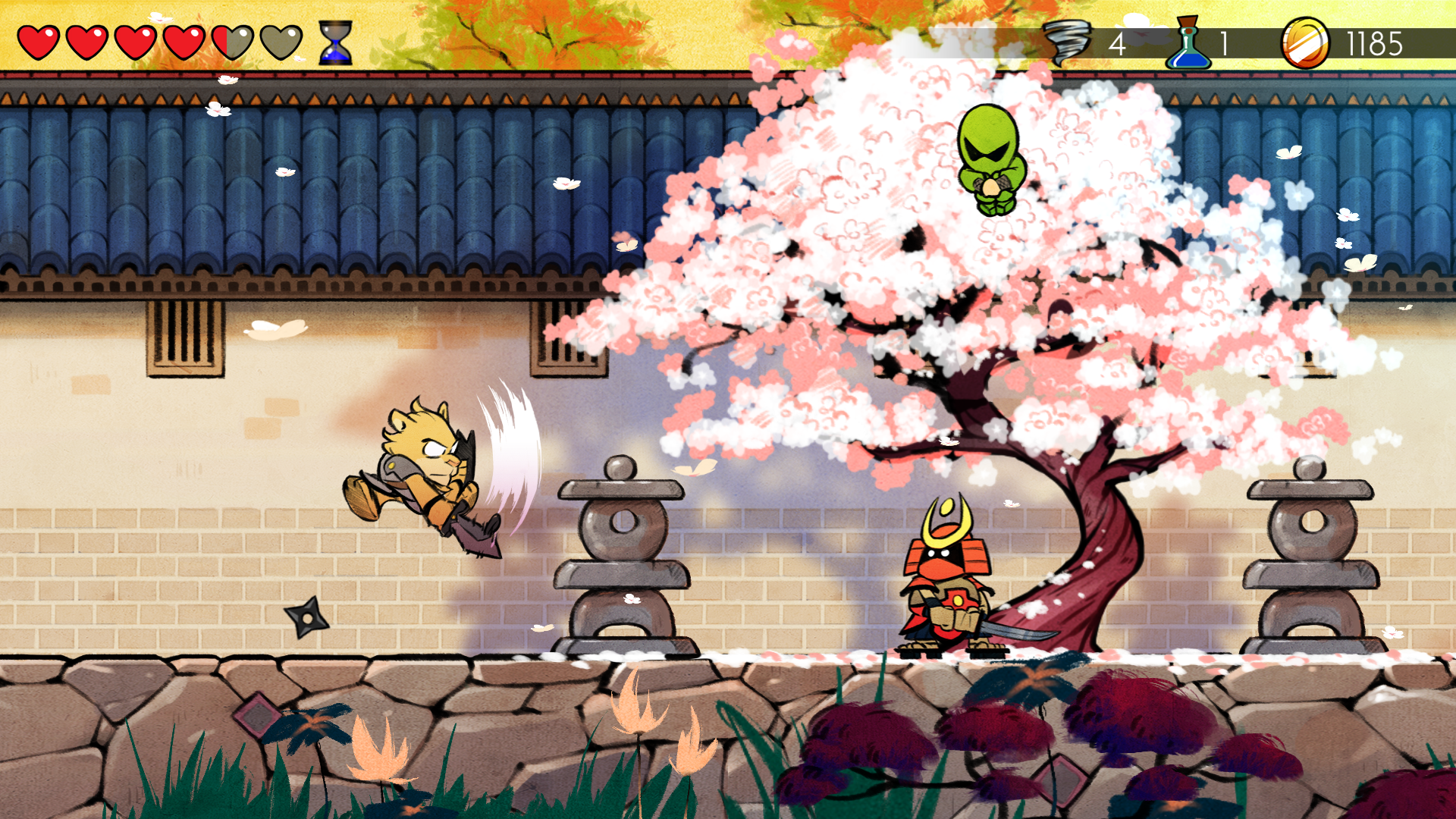 The new look to the game is what shines here the most. Using hand-drawn characters and worlds, the visuals brought to mind an Ankama Animations production. Its bright colors, expressive characters, and even some tongue-in-cheek humor was simply an awe for the eyes. However if I was in the mood to see how the original game played, I could head into the Options menu and change the visuals, sound, and soundtrack to how it looked and sounded on the Master System. Playing on the Nintendo Switch itself had the game coming in through smoothly, be it via in its docked mode or in portable. In fact, I was very surprised to see how fluid the animation was on the portable setting, with the action happening at a smooth 60 frames a second with no lag whatsoever.

For the most part the controls were pretty well-done, but there were a couple issues I had. I noticed a little sensitivity in the left control stick, as moving past a door would inexplicably have Wonder Boy walk through it even if I nudged it just a tiny bit. Then there is the items menu, which is located via the Switch's X-button. Whenever I was in a boss battle, I often found myself accidentally pushing it, resulting in me being thrown off my game and getting my hero hurt in the process. (If it had just been located in the regular options menu or via one of the trigger buttons, then it wouldn't have been an issue.) 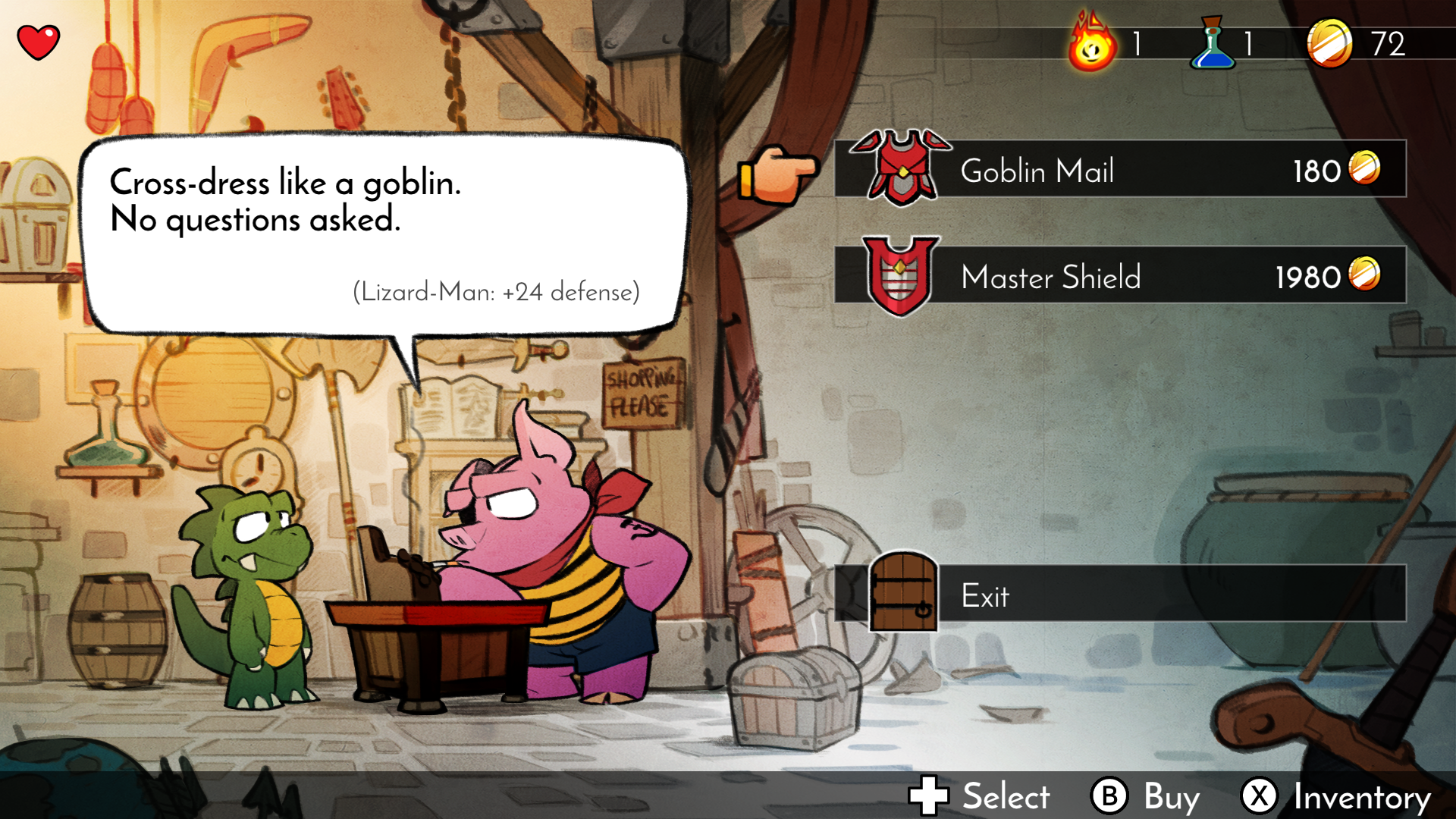 Completing Wonder Boy: The Dragon's Trap will take you roughly six hours to complete. Although there isn't much replay value soon after it's done, you can unlock some really cool sketches, test animations , and even some video performances from the game's score to see the songs in action. Also if you have some of your old codes from the original Master System release, be prepared to see them still work here, especially the ultimate code of them all...

If you're like me and have never played a Wonder Boy game, then this remake of The Dragon's Trap is a great way to start diving into the series. Its beautiful graphics and classic gameplay motif makes for one of the better revamps of games of old. Needless to say, I'm keeping a close eye on LizardCube from here on out, as I'm expecting big things from them in the future.