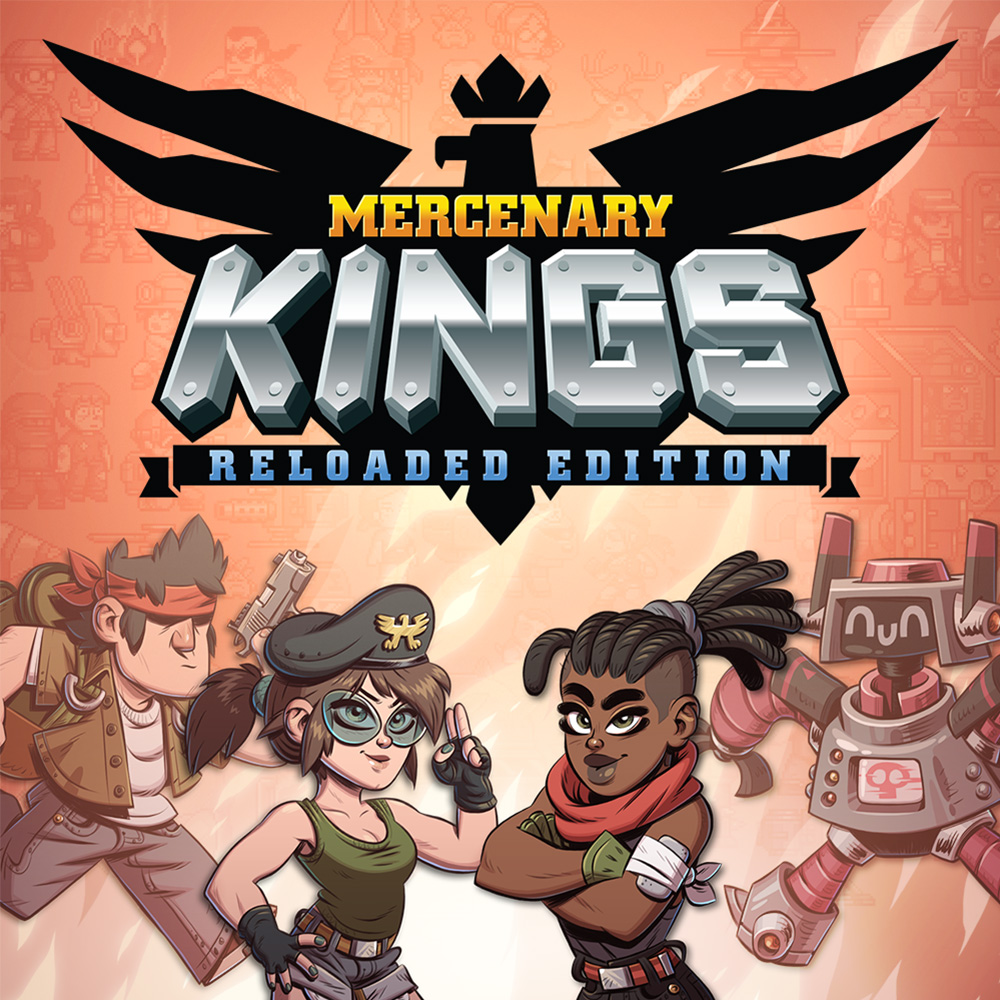 2014's Mercenary Kings was a nice throwback to the era of Metal Slug and Contra, thanks in part to its retro looks and over-the-top comedic violence. However, it wasn't without its share of issues, from some weird graphical glitches to one of the most roughest control schemes these hands had ever touched. Now four years later, Mercenary Kings returns via a "Reloaded Edition," gracing the Nintendo Switch for the first time since its concoction. Have the wrinkles of this pixelated war story been ironed out?

For those unfamiliar with the story of Mercenary Kings, here's a refresher. Up to four players take control of a mercenary-for-hire team to stops the forces of the evil CLAW (no relation to the Inspector Gadget villain). When your comrades have been captured on a Laboratory Base, you and your teammates must rescue them with the aid of rogue brainiacs and weapons experts. As you shoot and slice your way through the island, the goal to take down CLAW becomes more apparent the more dangerous they become. 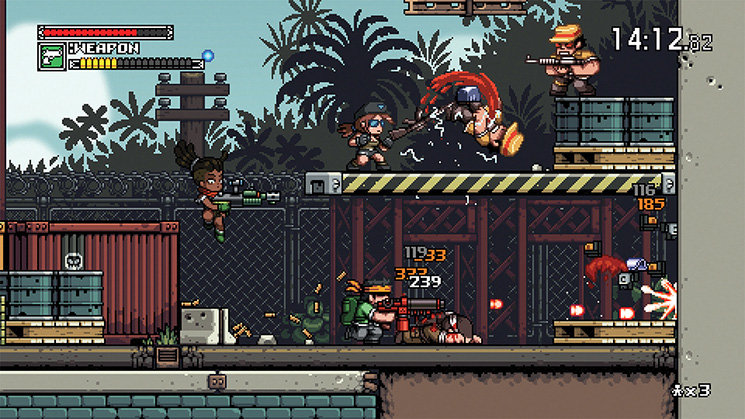 As you play through Mercenary Kings, you will be able to upgrade your weapons and gear via the cash and supplies you earn during each mission. Of course, like most games, one must read how these new weapons and the like will aid and hinder you, as they bring their own set of pros and cons for aiding you. While they may have better fire power or a sharper edge, they could also be heavier to wield or slower to reload. With a proper strategy and game plan in place, though, you should have no issue with any sort of weapon you take into battle.

Diving into each level brings forth a melee of chaos into your scope. Taking down enemies, evading traps, and discovering secret goodies and the like is what you will find yourself doing for the majority of this game. Fortunately, thanks to its challenging difficulty, you'll have no time to feel bored, as a lot of the villains that appear will give you quite the fight. With only three lives, a small travel pack, and a scattering of first aid tents throughout, each mission you take on will require a lot of thinking and planning to initiate it successfully. Die too many times, and it's a mission failed; die a couple times and succeed, and you'll just have some of your reward money deducted. 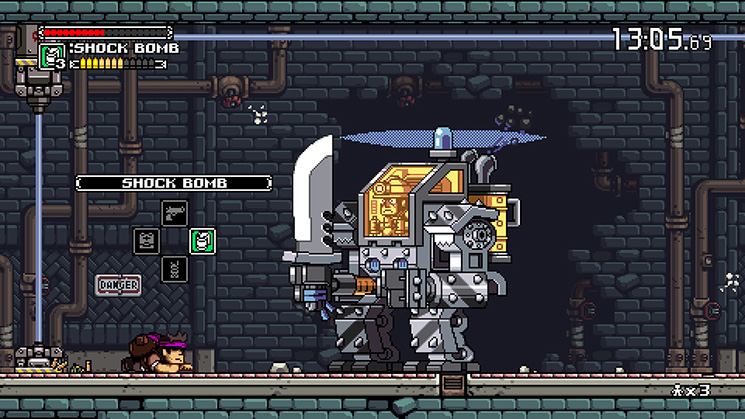 However, playing a game like Mercenary Kings will require you to team up online or in person in order to move on. I found levels that required you to face off against a bigger enemy like the Steel Soldier were twisting my arm to get some aid from other players in order to take them down. While I do understand this game has a big focus on teamwork and the like, there should've been a curve for those who were looking to play this one out solo. (Or, in the worst-case scenario, when your internet is down or your playing this game on the go.)

One of the first flaws of the original Mercenary Kings seems to have thankfully been eliminated, as the game from start-to-finish looks fantastic. With its SNES-styled visuals, my adventure taking down CLAW was a true sight for my eyes. Never once did I see my character glitch out like it did in the original PS4 version of the game, and the animation flowed with near-perfection throughout every pixel. Tribute Games, who did last year's Flinthook and aided in creating one of the best movie/comic tie-in titles with Scott Pilgrim Vs. The World, has a true knack for making the most retro-looking of games feel fresh, and it shows here wonderfully in this "Reloaded Edition". 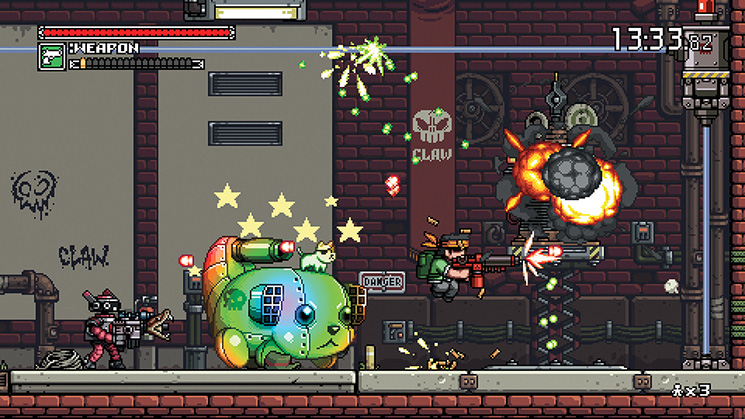 With that being said, this game's controls are still a bit confusing to handle. Playing the game in the Switch's docked mode, I had a lot of trouble with accidentally pressing the wrong buttons and triggering menus during some of the more chaotic moments of the video game. It wasn't a situation that required getting used to the layout; it's simply a case of bad button placement.

It's because of this where I feel like Mercenary Kings plays better when in Switch's handheld mode. Thanks to the lengthier spacing between the two Joy-Cons, I found myself rarely having to worry about my fingers slipping on the wrong button or igniting a bad command. Granted, it doesn't solve all the controls' problems, but it does nip a good chunk of them in the bud when playing on the go. 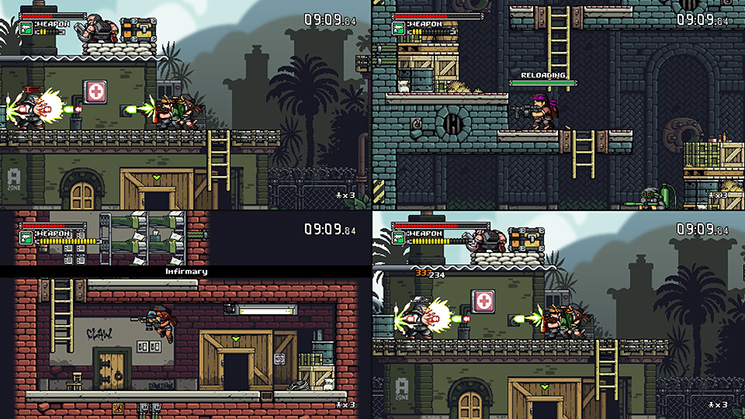 Mercenary Kings will take you roughly twenty hours to beat its main story, with an additional ten for its side-quests. New to the "Reloaded Edition" are two additional characters with their own traits, with Frigg having better jump abilities and the robot C-Zar landing softer to initiate stealthier attacks. Weapons such as guns and knives have had some new additions for the crafting table, meaning you can test out new combinations if you've got the virtual cash to spend.

Even if doesn't have all its issues fully resolved, the "Reloaded Edition" of Mercenary Kings still packs a wild punch. With a fine foray of missions, weapon combinations, and multiplayer goodness, Tribute Games has crafted a war-based shooter 'n' stabber that welcomes the chance to play nice with others whilst taking care of the CLAW garbage. Just be sure you play it in handheld mode if you want your missions to go over smoother, or else you'll be tossing out pricier curse words than Sly Stallone in Demolition Man.