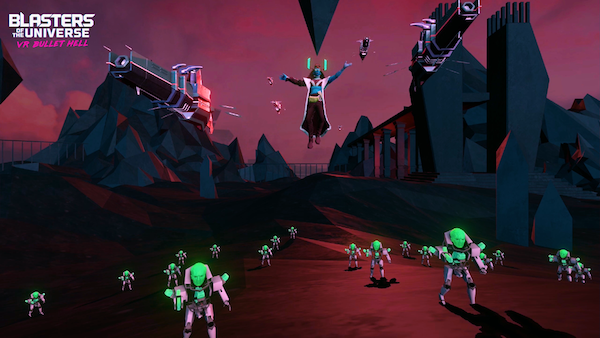 GAME REVIEW | Blasters of the Universe

Inserting oneself into the action of a video game is what makes virtual reality such an immersive experience. Bullet hell games are scary enough as it is, taking place on a 2D plane while tons of bullets head towards a tiny ship. Thrusting this concept into the first-person perspective of a VR shooter, Blasters of the Universe takes the brain-busting space management of a bullet hell game and forces you to stare helplessly as the sea of bullets slowly drift towards you. One of the smoother-controlling shooters I've played in PSVR, while relatively short, it offers plenty of challenge that will have you coming back for more.

When a game truly gets into your head, you start to see the patterns coming at you every time you close you eyes. This is exactly what I experienced with Blasters of the Universe and the intense bullet hell experience contained within. Framing the game around an arcade troll who has conquered a VR game and named himself Master Alwyn, you are tasked with going into the virtual world and defeating him and his minions. Plopping you into each stage with just a gun and shield, you have to face a slew of enemies who are shooting a large mount of slow-moving bullets your way. 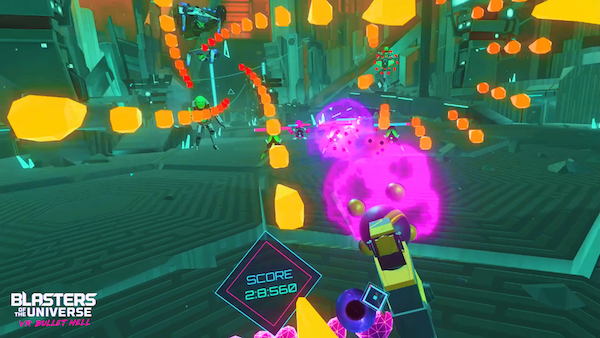 Since Blasters of the Universe offers you a shield right up front, it's easy to assume that blocking shots is the primary way you'll be staying alive. This might have been true, but this is VR after all, and with full control of your head and body, dodging is a surprisingly necessary tactic for surviving. Since your shield, which can be activated and dropped at will, loses power for every bullet that hits it, you can only block so much. Most of the patterns of bullets in the game come at you in such a way that you can edge your head either around or through them without getting hit. This doesn't always work, when you have multiple enemies all blasting different patterns at you for instance, but that's where the shield can be truly useful. Multitasking dodging on one side and blocking on the other, while shooting in yet another direction is the kind of multitasking action that makes Blasters of the Universe fun and left me sweating after each level.

Customization is also a huge part of Blasters of the Universe. The game offers a decent selection of frames, that offer a special move to be used once per level, ammo types, shields, muzzles and other gun parts that can let you tune your weapon and defense to the style that suits you best. I ended up going for shots that did decent damage while moving and shooting as fast as possible. It can be frustrating to shoot at an enemy, only to have them move out of the way before your shot even arrives. I also ended up with the shield that rebounds shots back, as just another way I could deal out some extra damage. 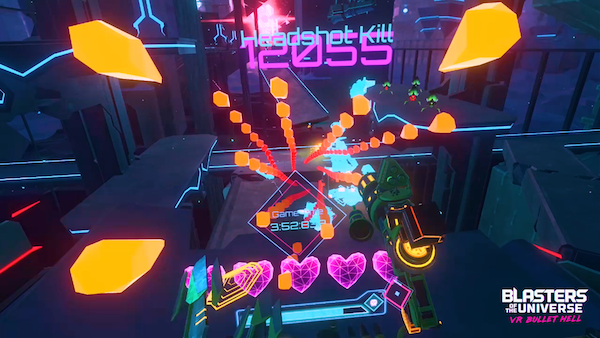 Each level can be played at a couple of difficulties. Your could either choose "casual" or "hell." Kind of a wide-sounding margin there, I know, but don't be fooled. Casual is plenty hard for those looking for a challenging experience. I did manage to conquer the first level on hell after a number of tries, but it was a feat that left me more sweaty than I've been playing a video game in quite a while. Master Alwyn has some pretty funny quips to throw at you while playing, but I wish he had just a few more. With the number of attempts it took to beat that first level on hell, I was starting to get quite a few repeats and it got a little annoying. More stages would have also been nice, but what's there is pretty entertaining. 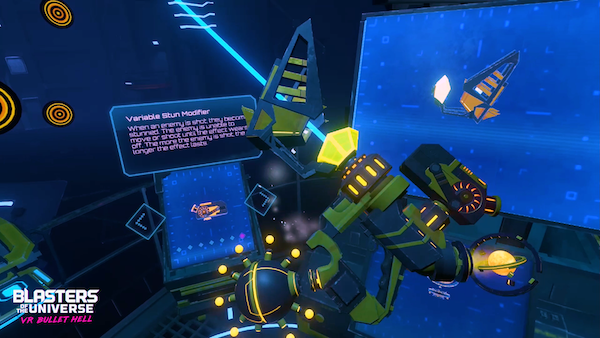 It's easy to want to write off a game like Blasters of the Universe as just yet another shooter for VR. That would be selling the game short though, since the bullet hell aspects of the game make it feel like so much more than just another shooter. It takes a while to get into the groove, but eventually you'll be dodging and moving more than blocking and you'll be able to see all those bullets coming for you every time you close your eyes. Blasters of the Universe is available now for PSVR.