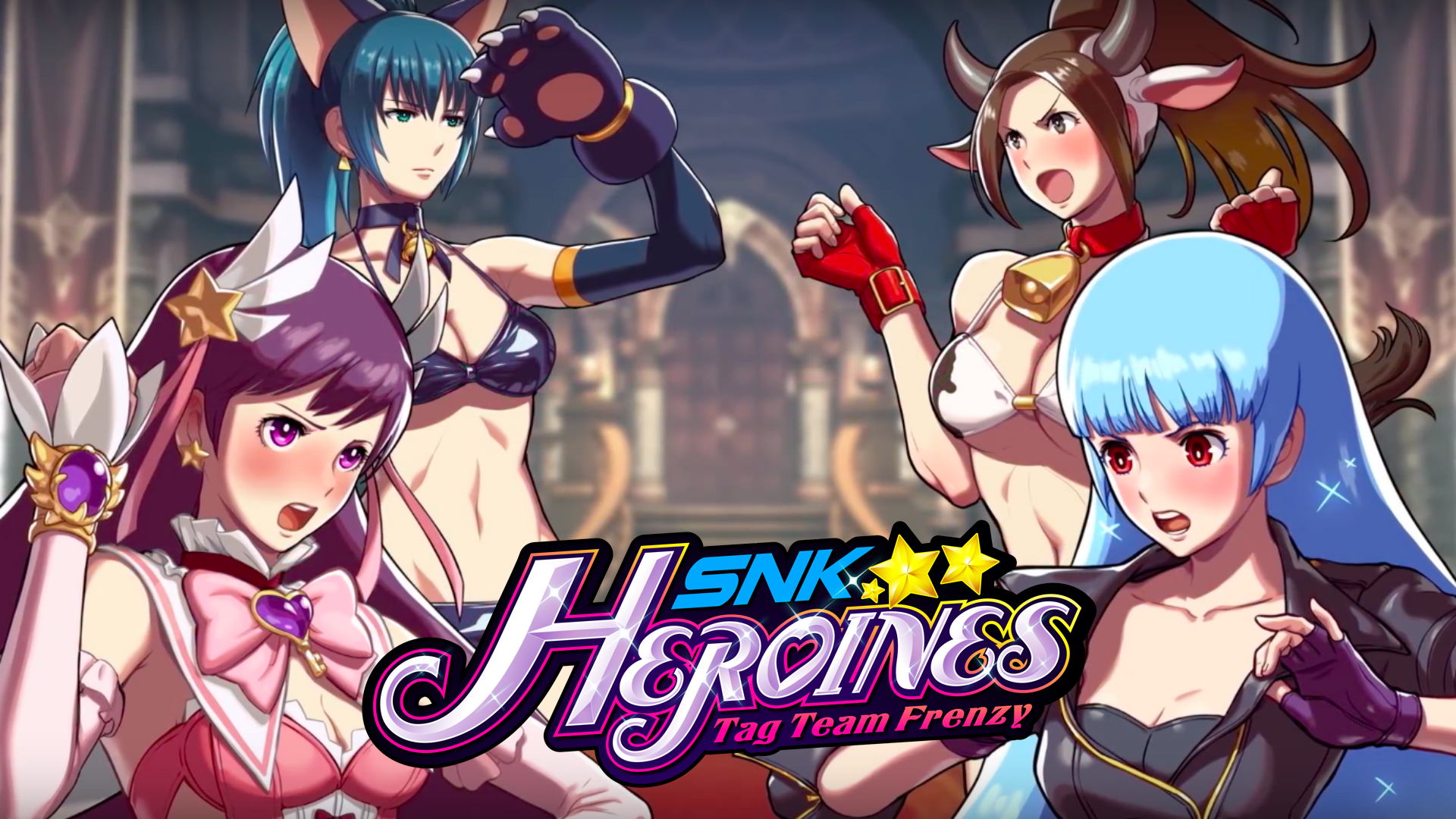 It's a fact: in the fighting game realm, women kick more ass than men. Chun-Li, Zafina, Sonya Blade, Mai Shiranui, and Sarah Bryant hold many a candle -- sometimes lit at both ends -- when faced against their male counterparts. Perhaps this is why SNK wished to showcase the plethora of "girly" fighters that have made many a knuckle sandwich in various stages and worlds. The end result, SNK HEROINES ~Tag Team Frenzy~, is a nice nod to these classic warriors, although it could've used a bit more sprucing up before it hit the stage.

SNK HEROINES ~Tag Team Frenzy~ already describes itself well. Plays can pick two of the currently fourteen fighters and switch them off during a battle. After choosing their costumes and colors, the combatants dive in to their surroundings and prepare for some of the most fashionable showdowns around. The catch this time is that the likes of Mai, Kula Diamond, Love Heart, and Luong aren't exactly dressed for a serious occasion; instead, they're wearing either the cutest and sexiest outfits around! (In fact, even Fatal Fury hero Terry Bogard gets in the action, albeit switching genders for the sake of being in just about every SNK-produced fighter ever made.) 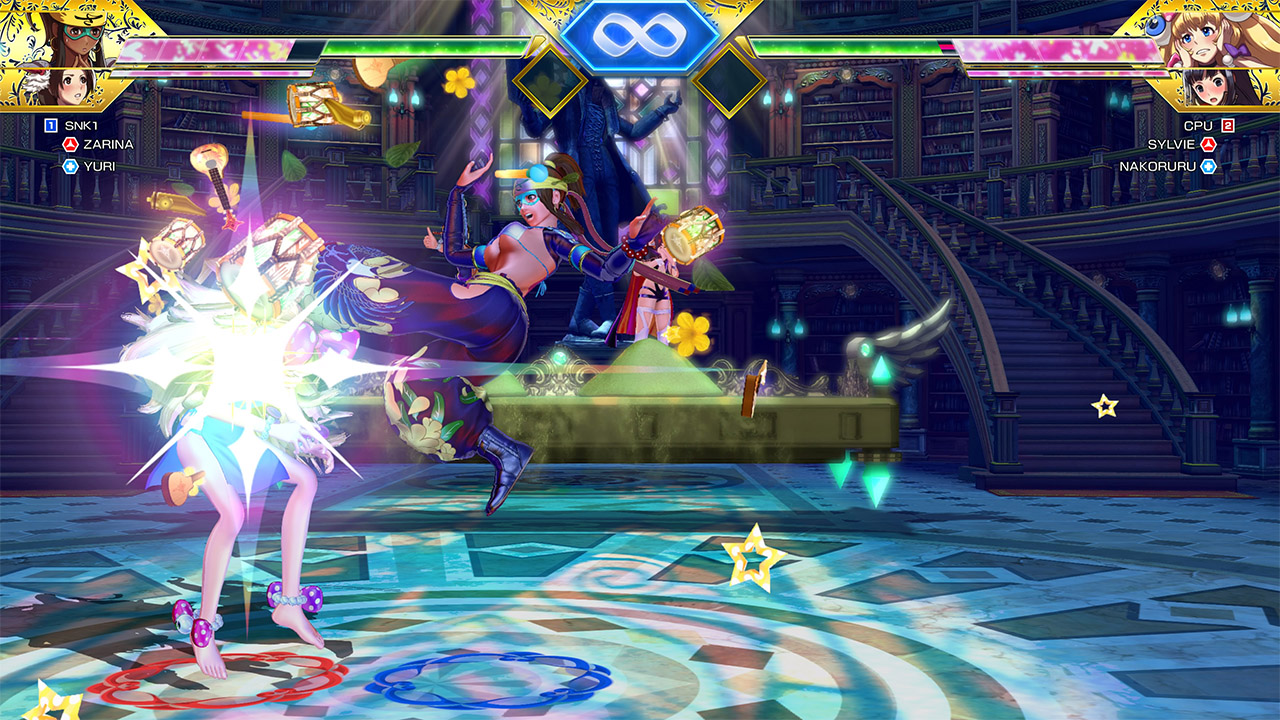 Unlike most fighters, SNK HEROINES seems to be tailored more for newcomers of the genre. Nary are a complex move or a complicated combo to be made. Players instead are subjected to a main three-button system for simple, advanced, and special attacks. Specials have their own variety of battles, too, as you can just press whatever directional button to showcase a killer move. Items can also be initiated such as bombs, springs, and even a comedic banana peel being a helpful way to gain the victory.

One other key aspect of this fighter that is different is that you don't fight until the other opponent is knocked out or killed. The only way to win is to implement a Dream Finish, which can be used when the opponent's health bar is at least red. These final blows are visually impressive, but it feels like the match fades to white too quickly to fully appreciate the scope of the impact. (In many cases, I didn't even see my opponent hit the ground due to the quick transition to the victory screen.) 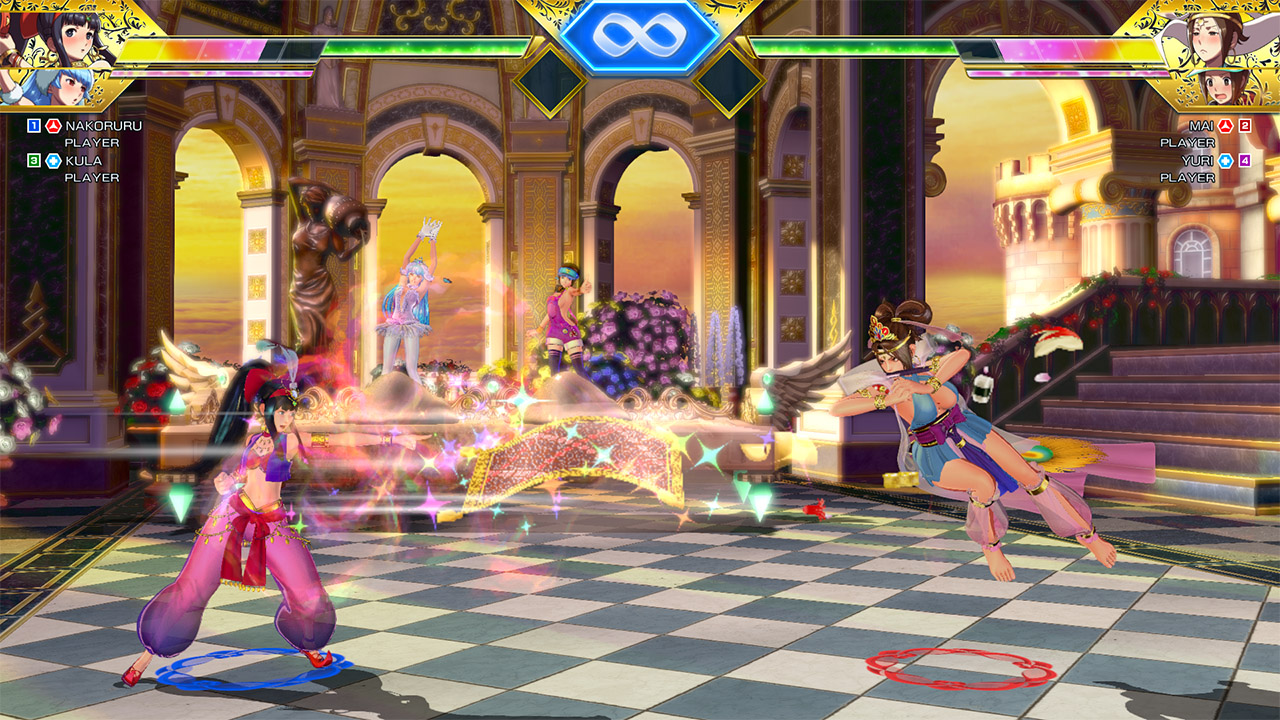 Control-wise, SNK HEROINES is a great way to get players into the likes of King of Fighters, Art of Fighting, Fatal Fury, Samurai Showdown, and many of the other classic fighters that the now 40-year old company has showcased for many generations. Jumping into battle is not only easy to figure out, but it feels rather rewarding to those who have never played a full-fledged fighter in their lives (or they just suck at them). However, those who are looking for a real workout for their fingertips will have to seek elsewhere, as pulling off the most ultimate of attacks doesn't even take much to accomplish. Even if it'll make the newbies happy, this game won't particularly put a smile on a competitor's face.

As you rack up the victories, you'll earn currency that can be used to unlock different costumes, accessories, and even voice options for your characters. With the right amount of cash, you can turn a badass like Leona Heidern into a cutesy cat girl wearing demon wings on her shoes. Yes, the outfits can look pretty silly (especially Sylvie Paula Paula's over-the-top get-ups), but it brings out a great batch of personalities from the fighters. Granted, the selection can be a tad short on the quantity side -- nor can you have one fighter wear another's main outfit -- but the quality that's placed into these accessories is pretty good. (My advice: have a fighter wear the whoopie cushion for some added laughs during the battle.) 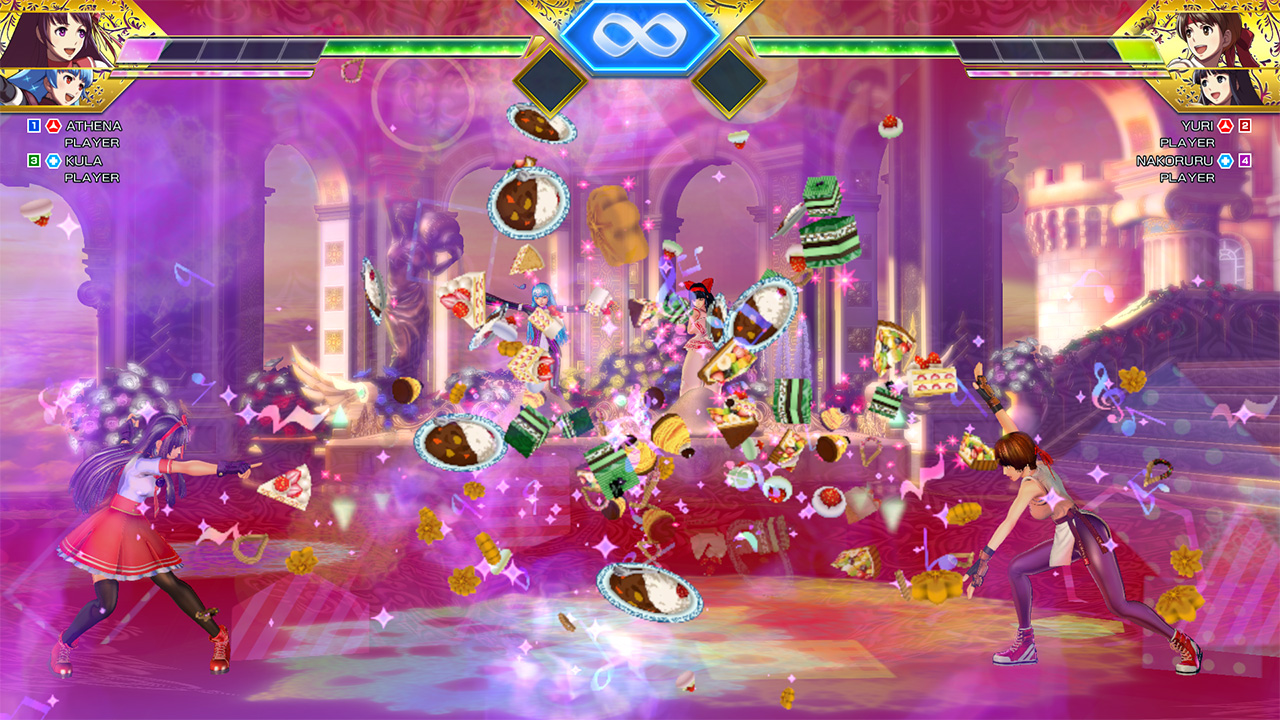 Sadly, despite the brimming personalities of the combatants, they're tossed in to a pretty lackluster story mode. The tale brought forth in SNK HEROINES, which takes up seven rounds, has The King of Fighters XIV newcomer Kukri kidnapping the combatants and forcing them to wear those interesting outfits. Using their despair, he hopes to open up a portal to bring about darker times. Only defeating Kukri will you be able to save yourself and the other fighters.

Though it sounds somewhat interesting on paper, the overall presentation of the story is a very generic. It doesn't dive deep into the where's, why's, and how's of the plot, nor does it give any reason for what exactly had led to these events. With that being said, I do like the fact that SNK and Abstraction Games actually put some effort into crafting different dialogue depending on who you are playing as. There's no default chatting between two combatants; everyone has something different to say about the person they're paired up with. 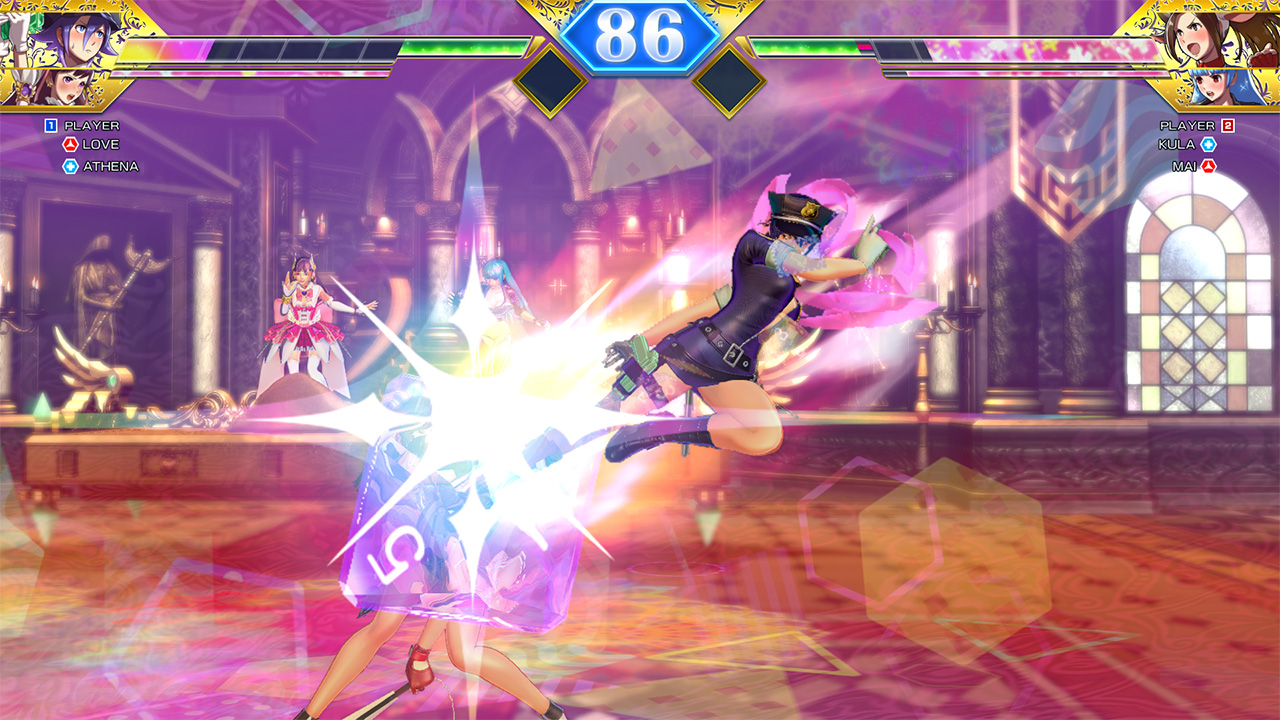 Graphically, SNK HEROINES looks wonderful on the Switch, be it in docked or handheld mode. The attention to detail in the outfits and settings shines greatly on the console, with only a slight pixel here and there looking a bit off. One minor complaint is the way the game seemingly switches between 60 frames per second to 30 on the fly. Although it doesn't do much to affect the battle happening, it will make certain players nitpick at how the motion of the battlers tend to be.

Online, players can face off against opponents in either a Quick Match or via specific rooms. Spectating a match can give you an extra challenge, as betting on a current bout can either give you more currency to buy stuff or take it away and lengthen your journey of owning all the store's items. Although the controls aren't built for hardcore competition, it can get nail-bitingly challenging when both fighters are in the red and are itching to throw that final Dream Finish. 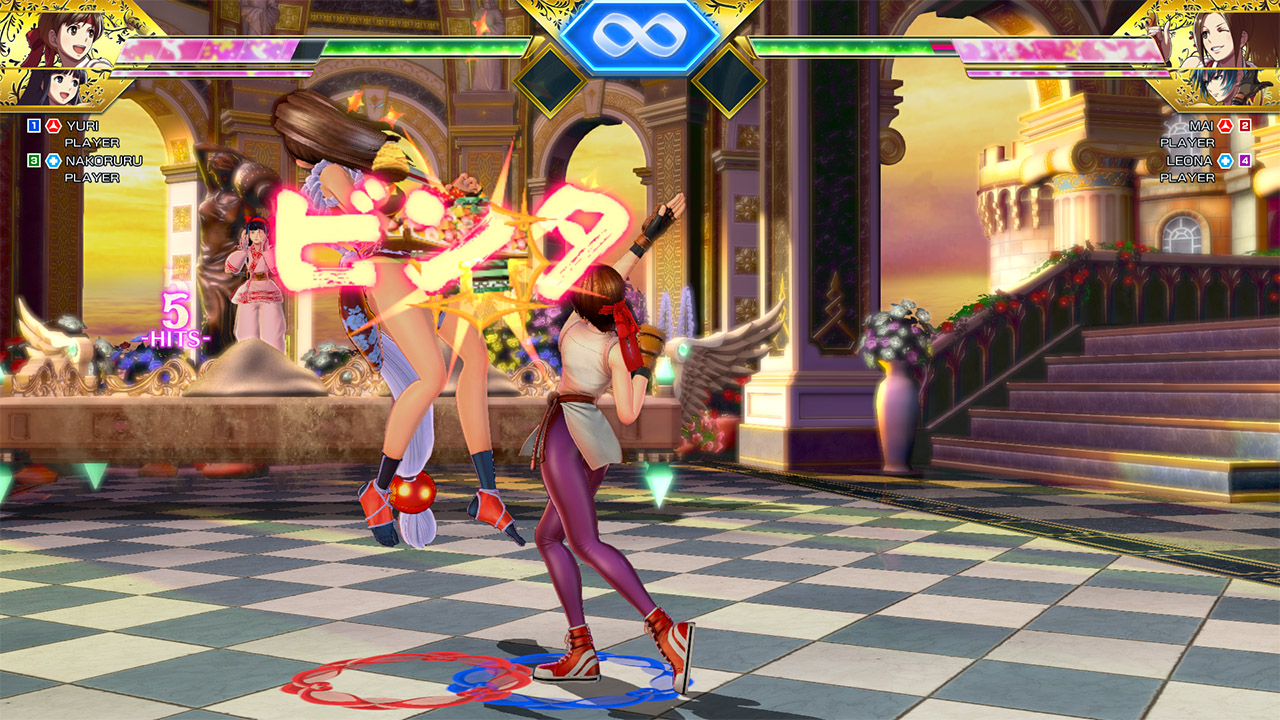 With fourteen fighters currently in its roster, SNK HEROINES doesn't have as full a locker room as most other fighters. Fortunately, other combatants will be added on later on, including Thief Arthur and one other mystery character. Here's hoping that these newcomers will be brought in either free of charge or -- if paid DLC -- reasonably priced.

SNK HEROINES ~Tag Team Frenzy~ is a fine fighting game showcasing the importance of the company's female characters. While it may come off as too easy for hardcore gamers, newcomers to the genre will have plenty to enjoy as they put up their dukes and lay some smackdown on the stage. It may have been 40 years since SNK opened for business, but SNK HEROINES have shown that the heroes and villains they've created haven't aged a bit!