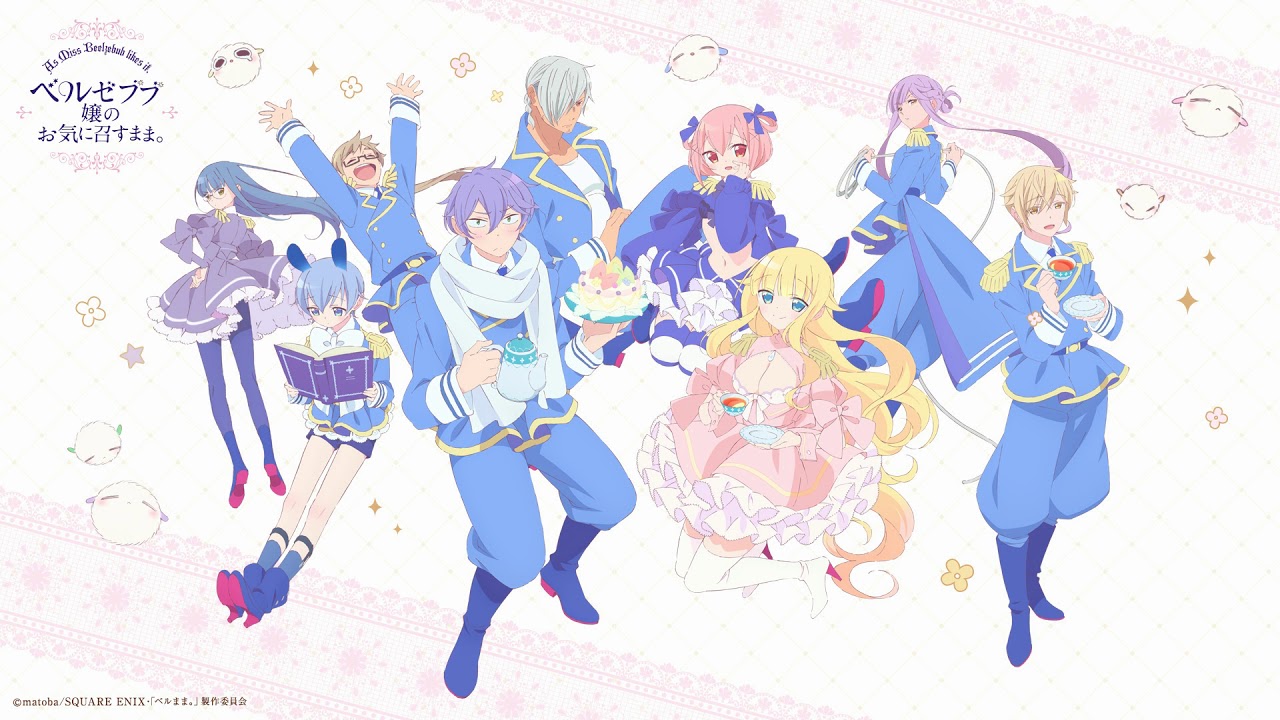 The supreme beings of Hell have always been portrayed in various ways. From the embodiments of fear & despair to even Saddam Hussein's boyfriend, the Devil has been shown in an array of personalities that have been entertaining in many ways. It would seem natural that one day, Lucifer would be showcased as a cute blonde-haired girl, and -- as luck would have it -- the anime industry would deliver that devilish presentation in such a manner. As Miss Beelzebub Likes it. is that series, and damn it all if it doesn't make you feel warm and fuzzy inside after watching it!

As Miss Beelzebub Like it. takes place in Pandemonium, the prettiest interpretation of Hell yet. Its titular character (Saori Ōnishi) is an often light-headed ditz who would rather roll in bed with fluffy creatures than do any sort of demonic business. She also has a crush on her Head Attendant Mullin (Rikuya Yasuda), who just so happens to like her too, yet both are too shy to say anything about it. What follows each episode is the day-by-day struggles to keep Miss Beelzebub focused on the tasks at hand, while handling the rest of the staff and crew that help/hinder their work in any fashion possible. 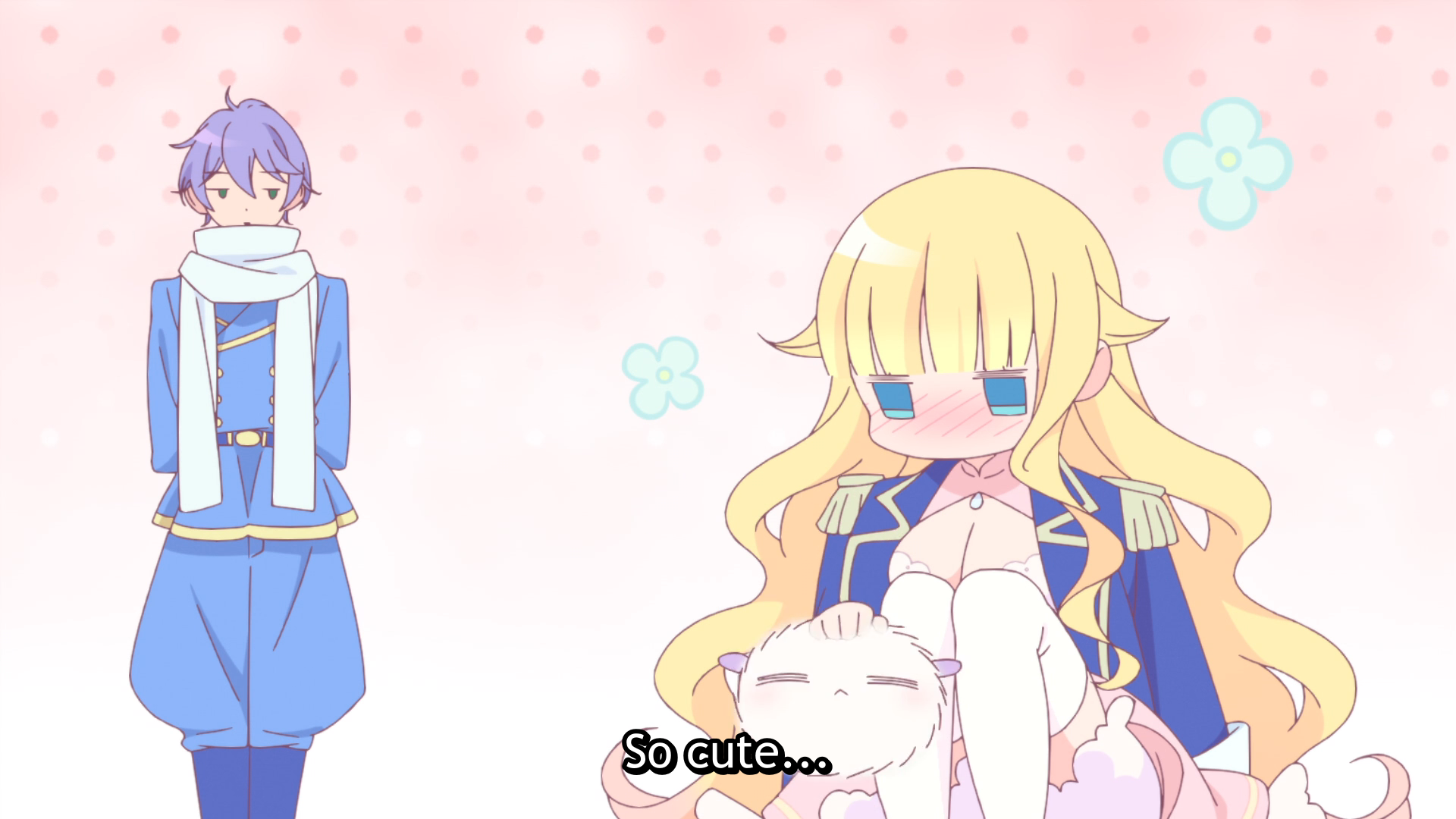 It's no secret that this anime's main goal is to make every ounce of this series as cute as possible, and it succeeds in doing so in many ways. For starters, the personalities of almost all of the characters are Sanrio levels of adorable. From the silent tough guy Azazel (Satoshi Hino) that collects stuffed toys and the always-tired rabbit-eared librarian Dantalion (Aoi Yūki) to the social anxiety-suffering Belphegor (Misaki Kuno), each character plays their part with such sweetness and innocence that you quickly forget that they're demons! Dare I say, it's part of this show's evil charm that keeps you blushing from its squishiness.

Of course, a cute show needs to be more than just visual candy to be truly entertaining, and that's where As Miss Beelzebub Likes it. shows its greatest strength. How the world of Pandemonium is surprisingly clever, with there being a big emphasis on letting its citizens be content rather than suffer. This gives way to various character developments that not just shape the level of their cuteness, but also gives them truly well-rounded personalities. As such, we learn the many flaws and faults of this show, and it demonstrates how they overcome their obstacles in some fashion. Again, they're still demons, but like Dracula in the recent Castlevania animated series, they give reason to their mannerisms. 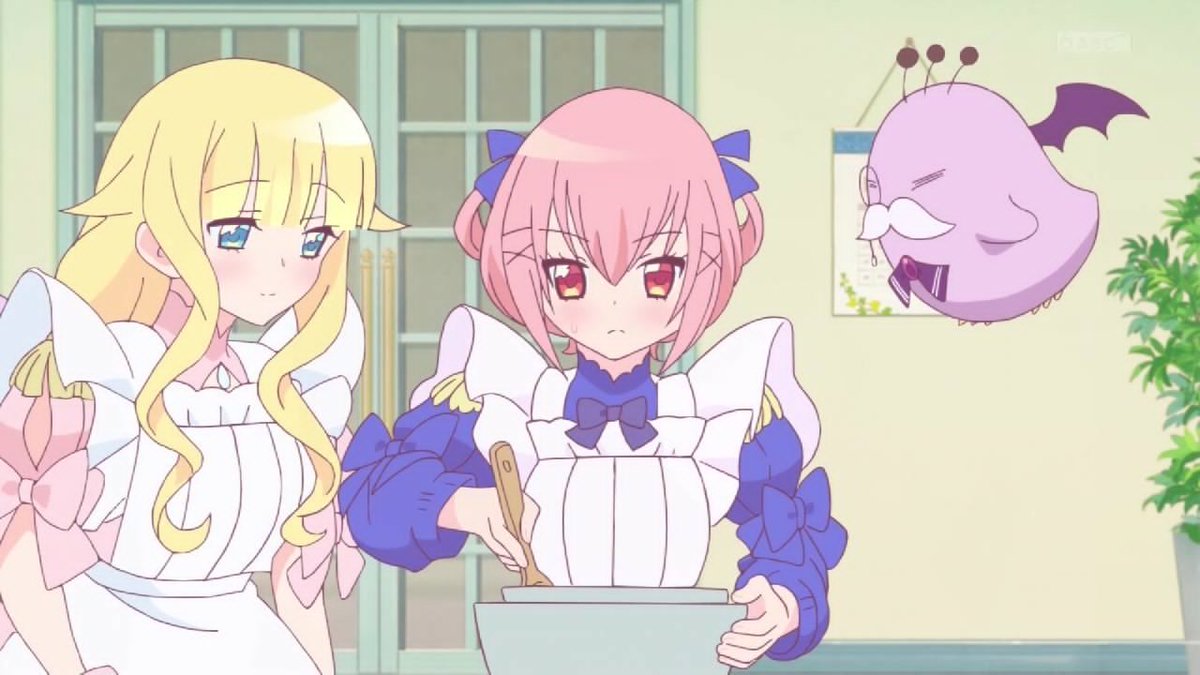 Hence why each episode is filled with enough charm to choke even the most princely of Disney Princes. From Miss Beelzebub taking care of Mullin when he falls ill to Belphegor learning to cook to win the heart of Azazel, each story presents a good amount of heart and care into the people that the series is focusing on. Yes, these storylines have been done in anime & manga in the past, but this anime does it heartwarmingly enough to make it still enjoyable to watch. It also knows when to show off its funny bone, be it when a Hot Springs is built into the castle or when Astaroth (Yoshitsugi Matsuoka) is berated by his assistant Sargatanas (Ai Kakuma).

Because of how the show seemingly pokes fun of shojo tropes, I often find myself comparing it to Ouran High School Host Club. Both are pretty on the eyes, but know when to take a proper jab at its respective genre. There's also one weird comparison to both series, as we learn about Miss Beelzebub's fear or lightning in the same way we did with Ouran's Haruhi character. While this may be coincidental, it's rather interesting to see that these similar moments are when its main focus shows any sign of legit fear for the very first time. Still, both anime are different enough to keep their similarities at bay. 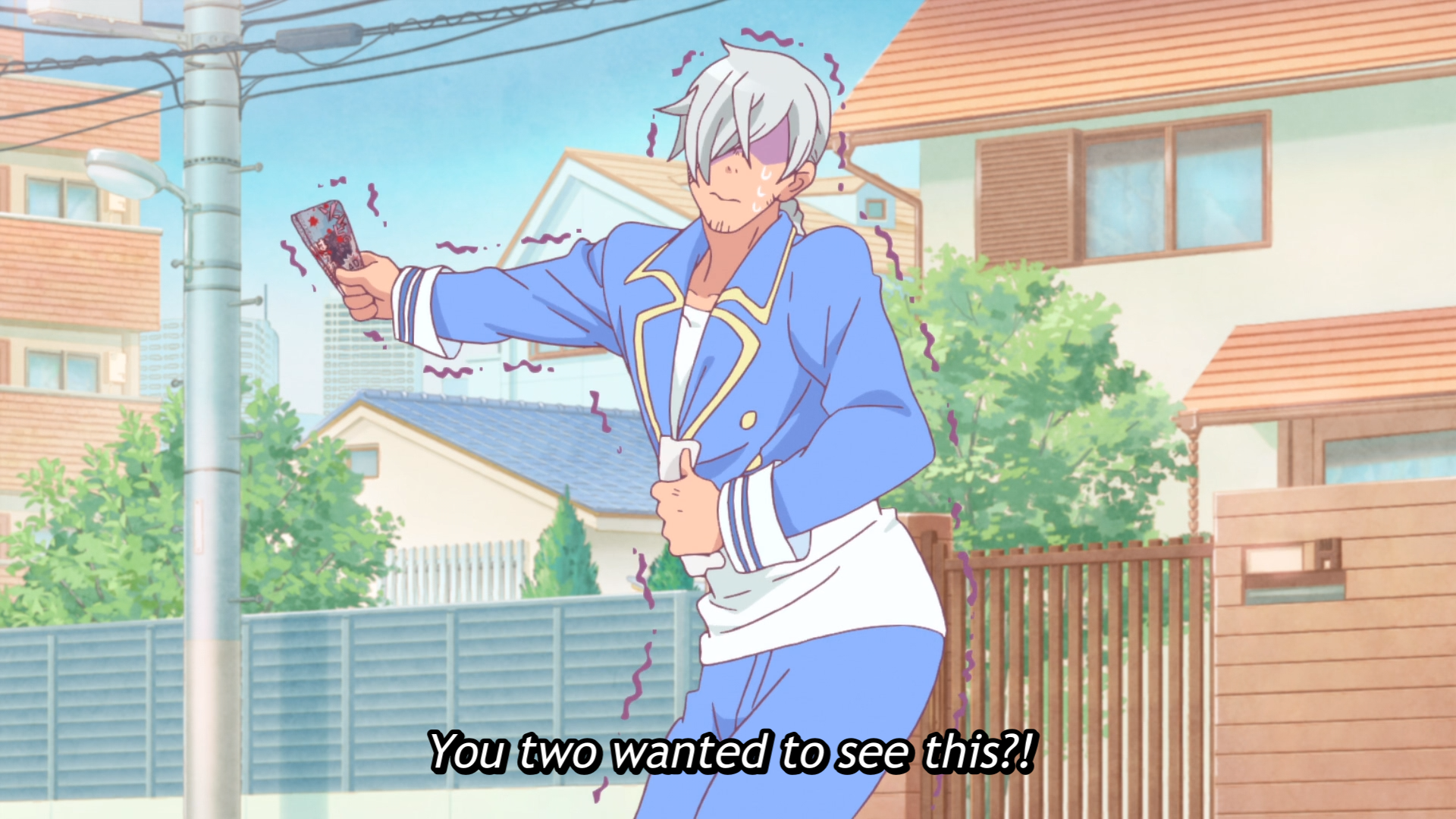 Perhaps most surprising about As Miss Beelzebub Likes it. is the company responsible for animating it. After going extreme with the angst in last season's Hanebado!, Liden Films takes the opposite route with this series. Every aspect of this show is bright and fluffy, to the point where you'll swear everything is made of candy or some other sugary treat. Although not part of the iyashikei genre, the anime gives off a good, calming feeling while watching it, even during some of its more comedic moments. Needless to say, Liden Films captures Hell in the most cutesy of ways imaginable.

Pushing the cuteness to full throttle is its voice cast, with Ōnishi delivering a sweet, adorable portrayal of the show's titular character. Yasuda has a very relatable tone as Mullin, as he shows off many an emotion with both sweetness and understanding. Meanwhile Yūki once again proves to be one of voice acting' shots eclectic performers, demonstrating pure innocence in her tone as Dantalion. Even though Hino barely ever speaks as Azazel, his grunts show off many forms of emotion as a certain member of Guardians of the Galaxy does with its three words. 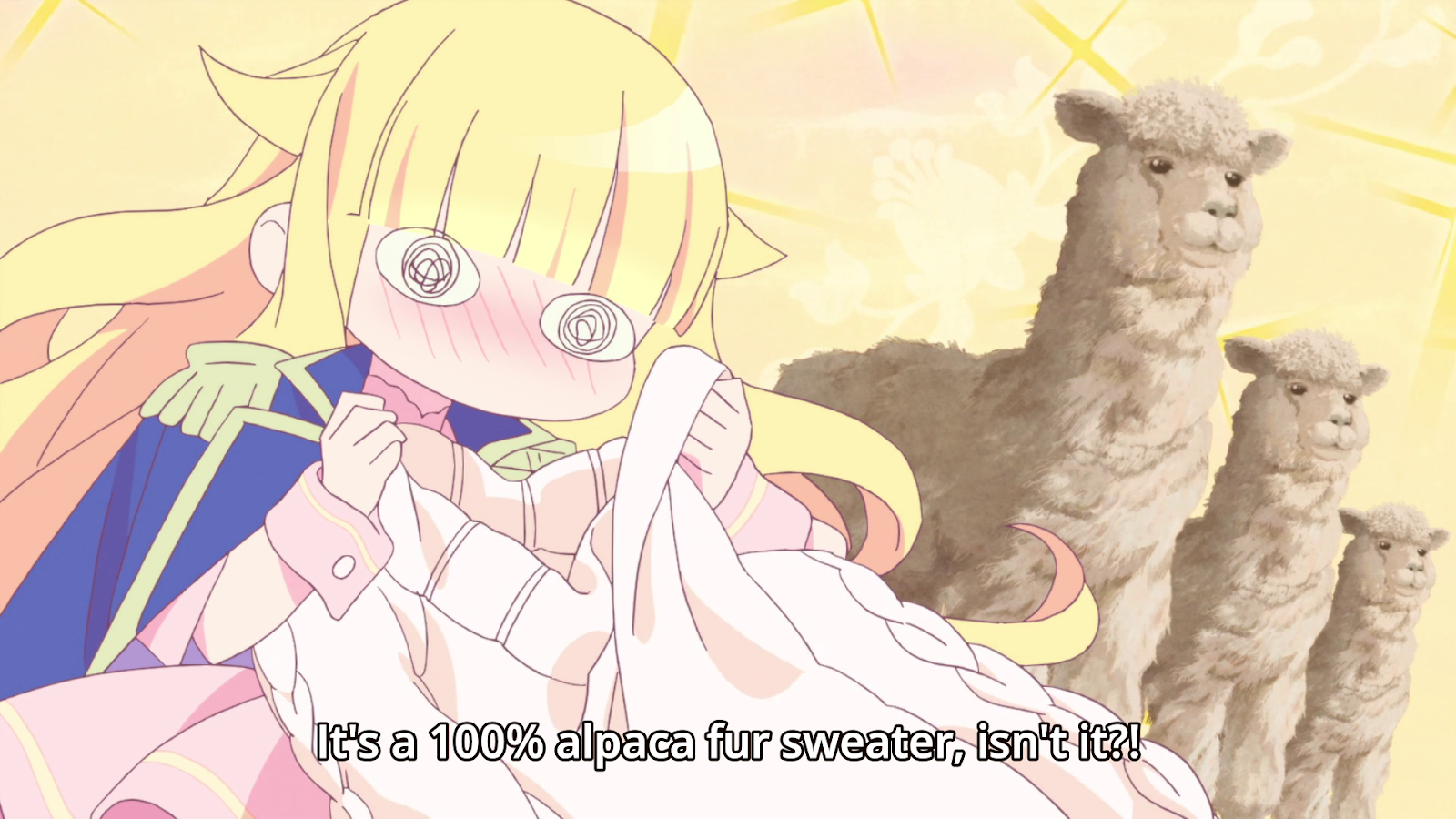 Composers Kanon Wakeshima and naotyu- (Is It Wrong To Try To Pick Up Girls In A Dungeon?) deliver some kindhearted melodies throughout the series. Although not exactly memorable, the music does a good job with framing each scene at play. Opening theme "Pink Lemonade" by Sangatsu no Phantasia is a lovely pop rock tune that demonstrates both the titular character's heart and soul with gusto. Ending theme "Akumade Koi Wazurai" by Ōnishi, Kuno, & Kakuma bring the main three women of the show to the center stage with levels of adorability that reach the same heights as newborn kittens & puppies.

Although some may not venture near As Miss Beelzebub Likes it. merely for its visual aesthetic, those who stick around will discover a world of great characters and the silly fun & mischief they get into. Comforting to the eyes and hearty for the soul, Liden Films' latest show delivers on enough sweetness to make it a worthy watch each week. With that being said, I would highly advise our readers to not start doing evil things to see if they can find out if Hell is just as pretty as this show presents it. Methinks those with that sort of mentality will wind up very disappointed when the time to croak comes around.

As Miss Beelzebub Likes it. can be viewed on Crunchyroll & VRV. Episodes 1-7 were observed for this review. Promotional consideration provided by Crunchyroll.