Jackbox Games has been putting out some quality party games for some time now. I would eve go as far as to say that they revolutionized the party video game genre with the release of the original Fibbage. After several new entries, there’s always the chance that they could be running out of ideas. Not every pack of games has been lived up to the high highs of the series as a whole, but I am pleased to report that The Jackbox Party Pack 5 has some fresh new games that keep me convinced that Jackbox Games still has the magic touch in creating awesome party games. Let’s go through each of the entries in The Jackbox Party Pack 5 individually to discuss what makes each of them great.

Kids of the 90s remember the original trivia game that started this whole thing with You Don’t Know Jack. A staple entry of the original Jackbox Party Pack, it has been noticeably absent from the series since then. There were some issues with the game back then, as the original method of playing the “Jack Attack” section of the game did not work well with the smart phone controls. Jackbox Games, reintroduces the game with You Don’t Know Jack: Full Stream and streamlines the game to better suit the control scheme. In Full Stream, during the ‘Jack Attack” segment, instead of only awarding points to one player, each player has a chance to score points, but you get more for being faster. This solves the latency issue from the last version of this game and makes it more enjoyable. Full Stream also allows for up to 8 players at once, which is a great improvement over the 4 from the last outing. I do miss the “wrong answer of the game” feature from even older You Don’t Know Jack versions, but I can live without it. 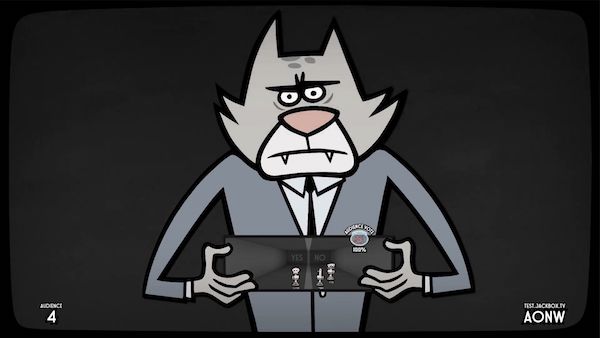 Split the Room is the first new game offered in this pack and it was a mixed bag for the group I played with overall. The game plays up to 8 players and I would suggest getting as close to that number as possible. The main point of the game is to create a scenario that is so difficult to decide upon that the votes in your group are as split as possible. This is more difficult the fewer people you have, so playing with a full group is essential. I love the theming around this game, with an awesome Twilight Zone aesthetic featuring a cat in the role of Rod Sterling. It’s a fun new concept that is easy to understand, which is a move in the right direction after the more complicated games of The Jackbox Party Pack 4.

Mad Verse City puts players in the role of killer giant robots that are destroying a city while having some epic rap battles. I am not particularly good at rhyming, or rapping for that matter, but I was surprised at how easy they made playing this game. Basically, you come up with the main noun/adjective of the first verse and then do the full second verse after the first generates. After that, you’re up the mercy of your group as to who had to best rap. This one was a group favorite and we enjoyed coming up with the sick burns in the raps. You also have the opportunity to destroy buildings by tapping a button really fast while waiting for other people to finish. Not a whole lot more to say about this game other than that is was a lot easier to use than on first impression which was, for the most part, the theme of this party pack overall. 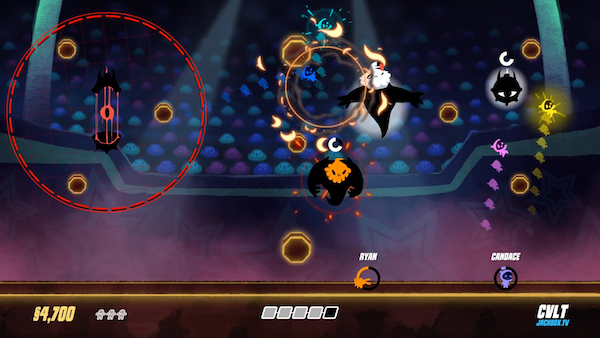 Zeeple Dome is probably the strangest of the games included in The Jackbox Party Pack 5 as it includes something we haven’t seen yet from the series. You are actually controlling an on-screen character directly using your smart phone in this game. Similar to games like Angry Birds, you are slingshotting your character at enemies in an attempt to destroy them. Unlike most party pack games, Zeeple Dome is actually fully-cooperative. You are working as a group in an attempt to make it through waves of enemies. The enemies are color-coded at certain points, which means that a particular player needs to make contact with them to eliminate them. The controls worked better than I expected, but they were still a little strange. It was hard to nail down when you were allowed to launch your character and what caused you to not be able to do so. It was also rarely clear if the inability to launch your character was to due the fidelity of the controls or a mechanic of the game. It was still fun though and it’s nice to see a cooperative game in The Jackbox Party Pack 5.

Saving my personal favorite for last, Patently Stupid is the best game in The Jackbox Party Pack 5. Jackbox Games have made many attempts at a drawing game that works really well and some have been more successful than others. What I really like about Patently Stupid is the freedom it allows you to be creative and win over the group in hilarious ways. In Patently Stupid, you draw a napkin drawing of a new invention, then you give it a name and a tagline. This is based on a problem given to you by the other players. Once you have your drawing, you have to pitch your new invention to the group, which you have total freedom to do, at least within the time limit. Even if your drawing is not great, if you can make up a funny tagline and name, you might still be able to win in this game. Of all the games in this party pack, this one had by far the greatest amount of laughs while we were playing. It also works well in both large and small groups. 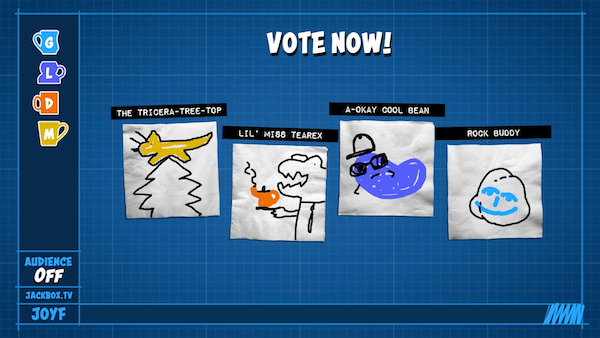 I continue to be thankful that Jackbox Games has continued to put out quality party games in this format and they have not lost their touch yet. Taking the lessons learned from the last party pack, The Jackbox Party Pack 5 delivers fan favorites and new games that are easy to learn and play for anyone with a smart phone. I would still rank The Jackbox Party Pack 3 as my favorite of the bunch, but this game is likely a close second. Now if we can get a sequel to Trivia Murder Party, me and my group will be thrilled. The Jackbox Party Pack 5 is available now on PC, PS4, Xbox One, Nintendo Switch, AppleTV and Amazon Fire TV.