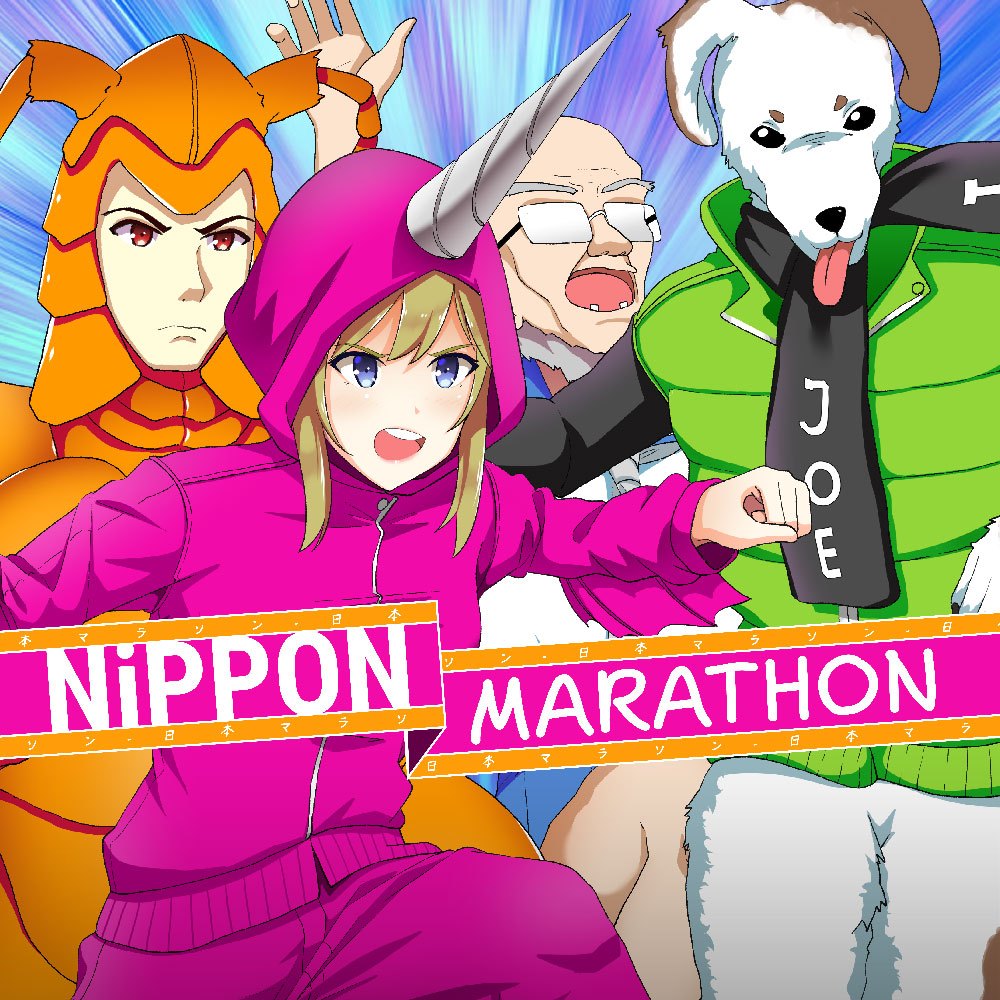 I remember watching MXC: Most Extreme Elimination back in the day, wishing that it could one day be given the chance at being a video game. Although many a game show that ripped off MXC and its original Takeshi's Castle would go on to get console adaptations (as well as a couple of Dorito's-sponsored titles that were better than they ever deserved to be), they all lacked that wonderful Japanese comedic spirit that made the original so iconic. Yes, the games were wacky, but the contestants were just your average run-of-the-mill blokes lacking that competitive enthusiasm.

Enter Nippon Marathon, a racing title from Onion Soup Entertainment that has players racing all over Japan to gain the top billing. Players can take control of an elderly man in a sailor skirt, a narwhal enthusiast, a lobster man, and a dog-headed gentleman just to name a few. This zaniness is exactly what the knockoffs of Takeshi's Castle were lacking, and it's very surprising to see it captured so well in this title. Not to mention, it also winds up being a lot of fun. 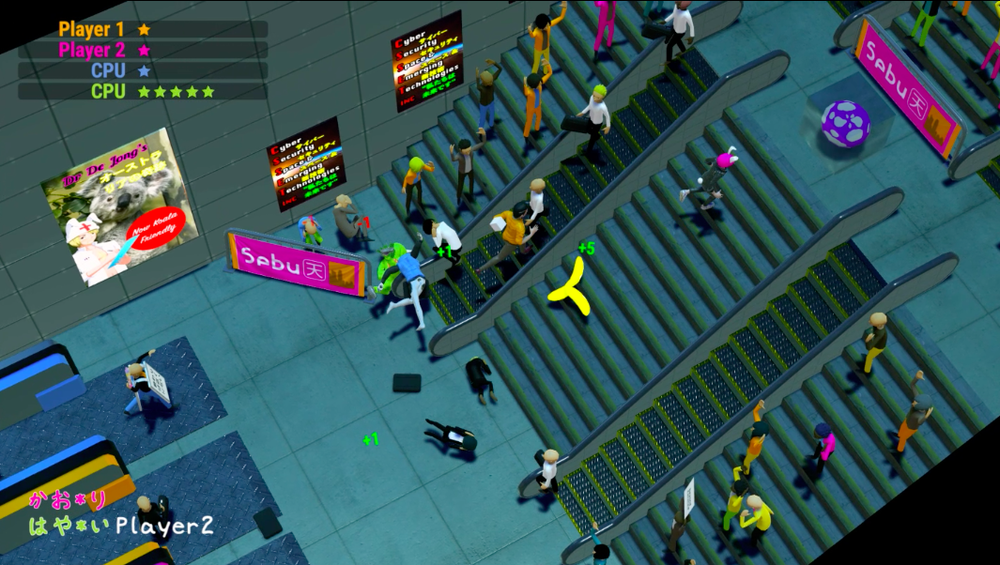 Each play-through consists of racing through different parts of the Japanese landscape, as you attempt to achieve as many stars and popularity points as you stay in the race. If you find yourself too far back from the rest of the pack, then you may find yourself eliminated until the next round in the race occurs. In some instances, the race will be stopped in order to compete in some word play, item-grabbing, and even attempt to escape a quick labyrinth. From this here description, it doesn't quite sound like what the original Japanese game show delivered.

However, it's in Nippon Marathon's presentation where those similarities begin to appear. Throughout the race, you'll find yourself going up against many obstacles from pesky chefs chasing you with cleavers to even steamy snow monkeys that will throw bananas and grab hold of an opponent for their own personal gain. There are also various hazards such as earthquakes, collapsible buildings, and rusty bridges ready to fall underneath your feet. It goes though so many motions in your head that it's hard to predict what's about to come around the corner. It's this instance where Nippon Marathon finds itself in the same grace as Takeshi's Castle, not to mention many other popular Japanese game shows. 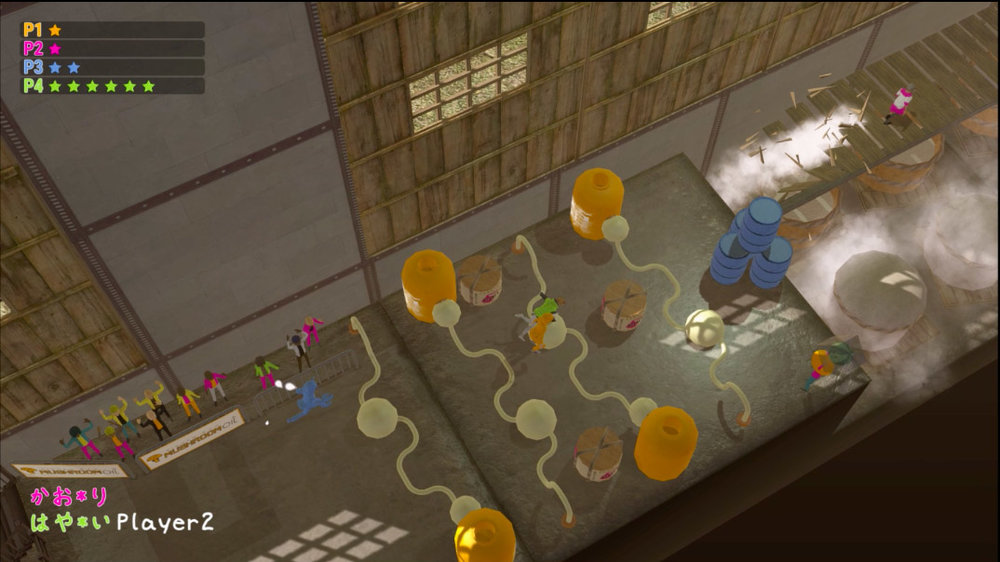 Adding onto this authenticity is its sports commentary. Whether in tradition Japanese or very hilarious broken English, the commentator aims to poke fun at both the competitors and the situations they're in. It is hard not to laugh your ass off as you bear witness to the silliness that you both watch and hear go on. And perhaps that's part of the challenge that Nippon Marathon offers: laugh, but you might lose!

Despite its goofy antics, this game is one hell of a challenge to master! It took me nearly two dozen times before I finally won a single match, which left me sometimes frustrated by the sort of toughness the AI offers. This is why it's best to tackle these maps when you can and hone a strategy for each area given. No two courses are the same, meaning that there will be a lot of opportune moments to screw up or flub a move if you're not too careful. 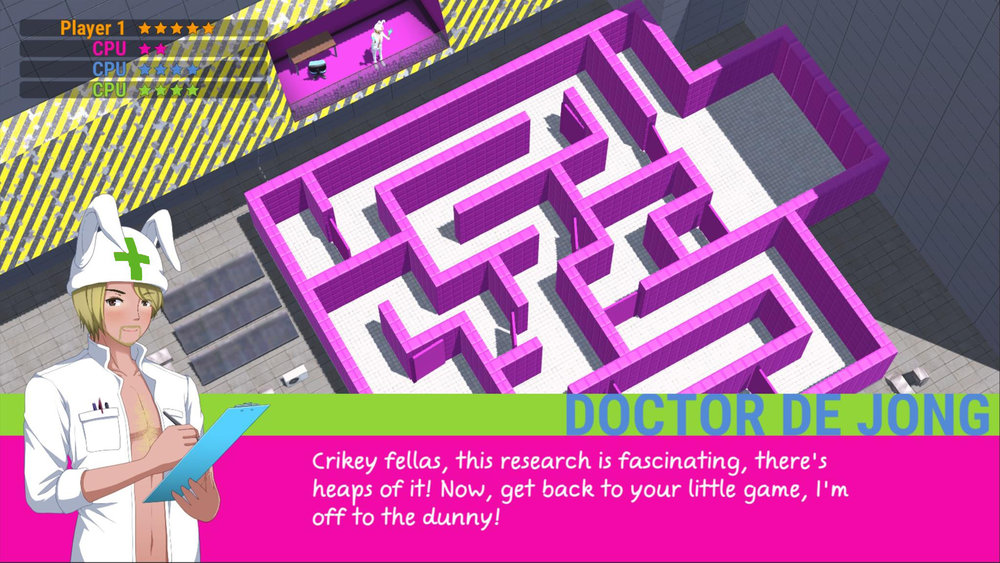 All of this is packed in a very humorous story mode, filled with character "drama," controversy, and a snooping reporter by the name of Wedy Jones. The storyline feels very much in line with a gag-humored anime, with much of it being nonsensical save for its core elements. Though a couple of chapters can drag on a bit (not to mention there being a lack of a Skip Dialogue option), the overall plot is very enjoyable.

Adding to this madness are two mini-games found in its Party Mode. The first is "L.O.B.S.T.E.R.", an obstacle course that's pure Japan-inspired wackiness. Up to eight players can enter and attempt to master the obstacle course before time runs out (or they get knocked out by many of its different hazards). The course will sometimes find itself switching out for different challenges via the spin of the wheel, giving way to there being no true strategy to take it on. Just run as fast as you can, and try your best to not be labeled the L.O.B.S.T.E.R.! 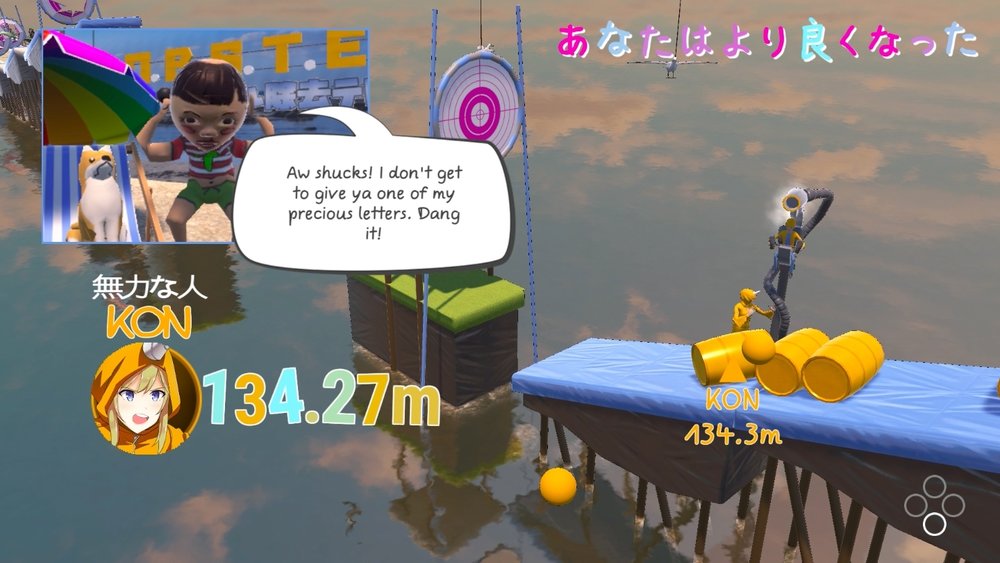 Taking more of a cue from Jackass, "Go-Go-Trolley" consists of lunging yourself and/or a shopping cart towards some massive pins. It's very easy to figure out, but one cannot predict whether you jump & lunge too early or too soon to earn as many points as possible. The task gets a little bit more harder towards the end, as hinderances are placed that might cause your speed to go down just a bit. Still, the amount of fun delivered in this mini-game alone with almost make up for there being a lack of Wii Sports' bowling mode currently on the Switch console.

Despite many of its highs, you cannot mask the flaws of Nippon Marathon. One would be forgiven if they saw the graphics in this game and thought it was some cheap $5 Steam title. It's not the prettiest game released in the last year, and its overall appearance may turn some players off from actually buying it. There's also the issue with bugs and levels pausing for a couple of seconds as a race occurs, giving way to some big groan-inducing frustrations. 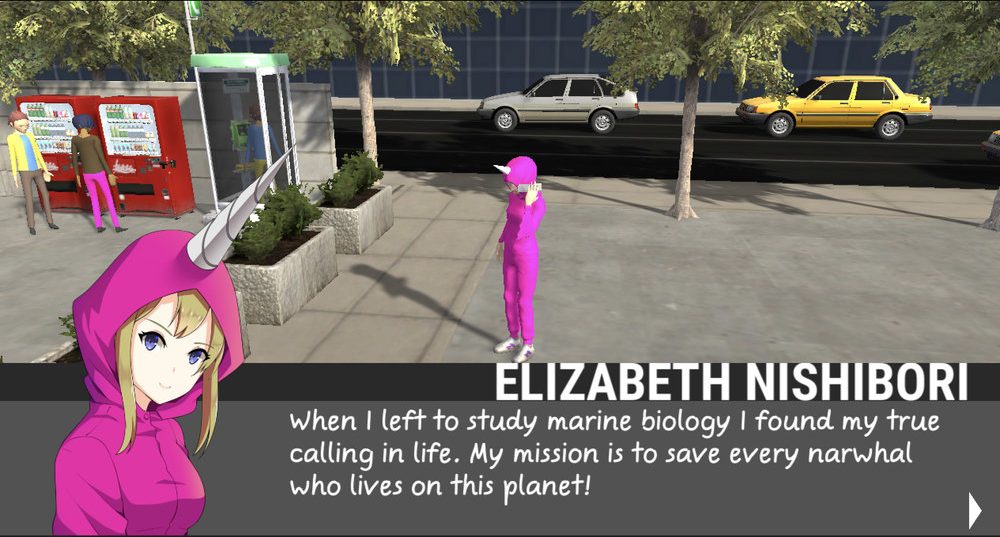 Lastly, like in Horizon Chase Turbo, there's no online multiplayer to be found. Although there is local multiplayer that's done pretty well, there is no way as of this review to play this with friends across the world. Replay-wise, there are some good reasons to keep playing the various stories, as it helps you unlock various modes and other racers to play when in any of the other game modes.

Nippon Marathon won't be winning any beauty contests anytime soon, but what it lacks in visuals is made up in its fun factor. Bringing forth the spirit of many a crazy Japanese game show, Onion Soup Interactive manages to deliver huge laughs with some extremely good competitive racing. If a couple of bugs can get ironed out, then Nippon Marathon has a great chance at being quite the cult favorite.