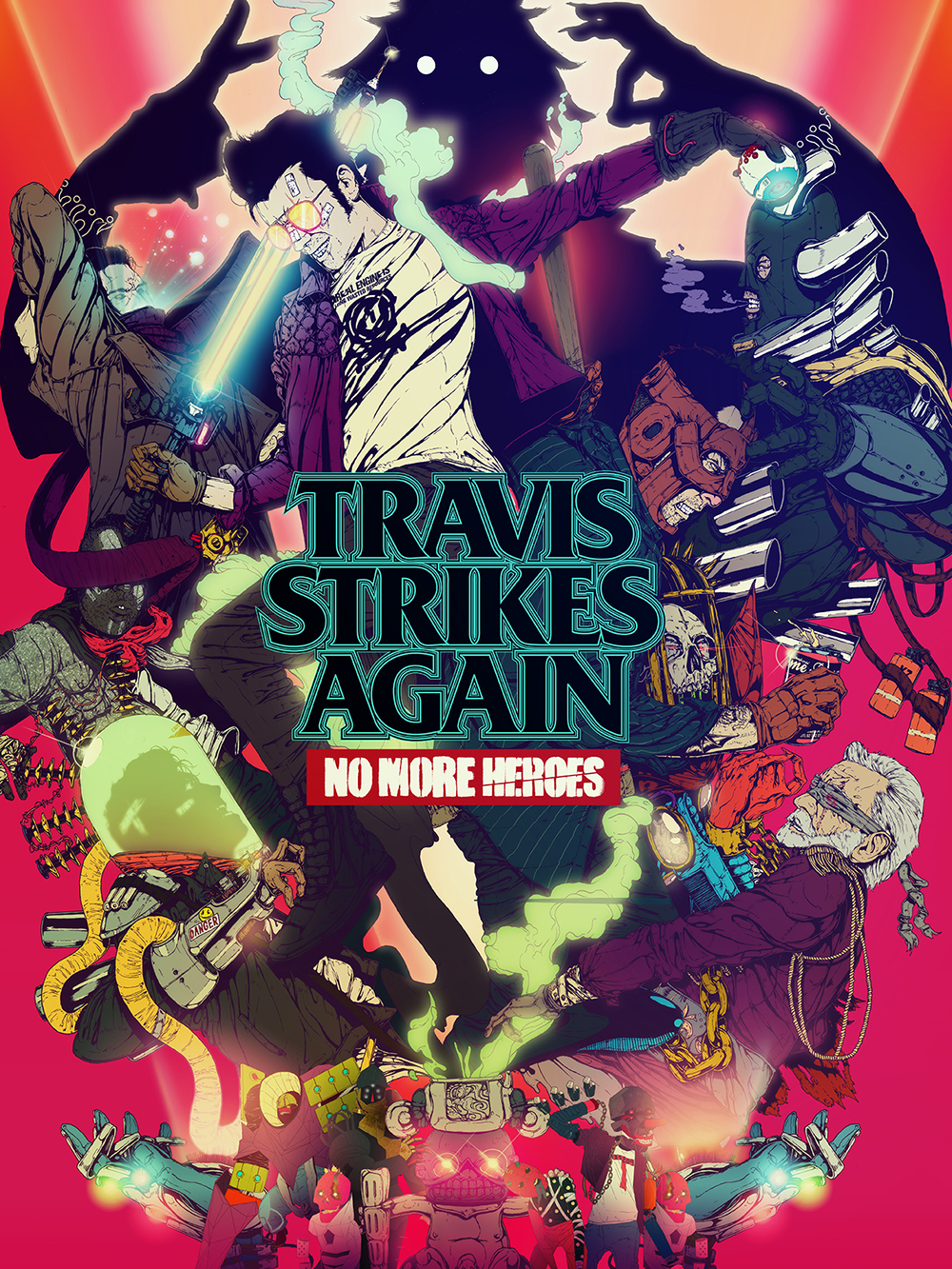 No More Heroes was the reason why I finally caved in and bought a Wii once upon a time ago. The story of Travis Touchdown and his mission to become the #1 assassin had me with its killer narrative, badass aura, and excellent control scheme. (Okay, maybe recharging your Beam Katana in a lewd way also made me want to buy it, but that's besides the point!) But it's been years since Travis has graced any sort of gaming console, with his last foray a so-so PS3 port of the main game with a sprinkling of its better sequel Desperate Struggle added into it.

So it was a sight to behold back in 2017 when its creator Goichi Suda (or Suda51, as every cool person calls him) appeared during a Nintendo Switch reveal, with Travis Touchdown proudly displayed on his shirt and a level of enthusiasm that even the presentation's translator couldn't fathom. In just a short couple of months, the first trailer appeared out of nowhere in a Nintendo Direct for Travis Strikes Again: No More Heroes, brimming with that attitude that fans of the series ate up like fresh takoyaki. Two years later, the game has finally arrived, but does it capture the same magic as its Wii predecessors? 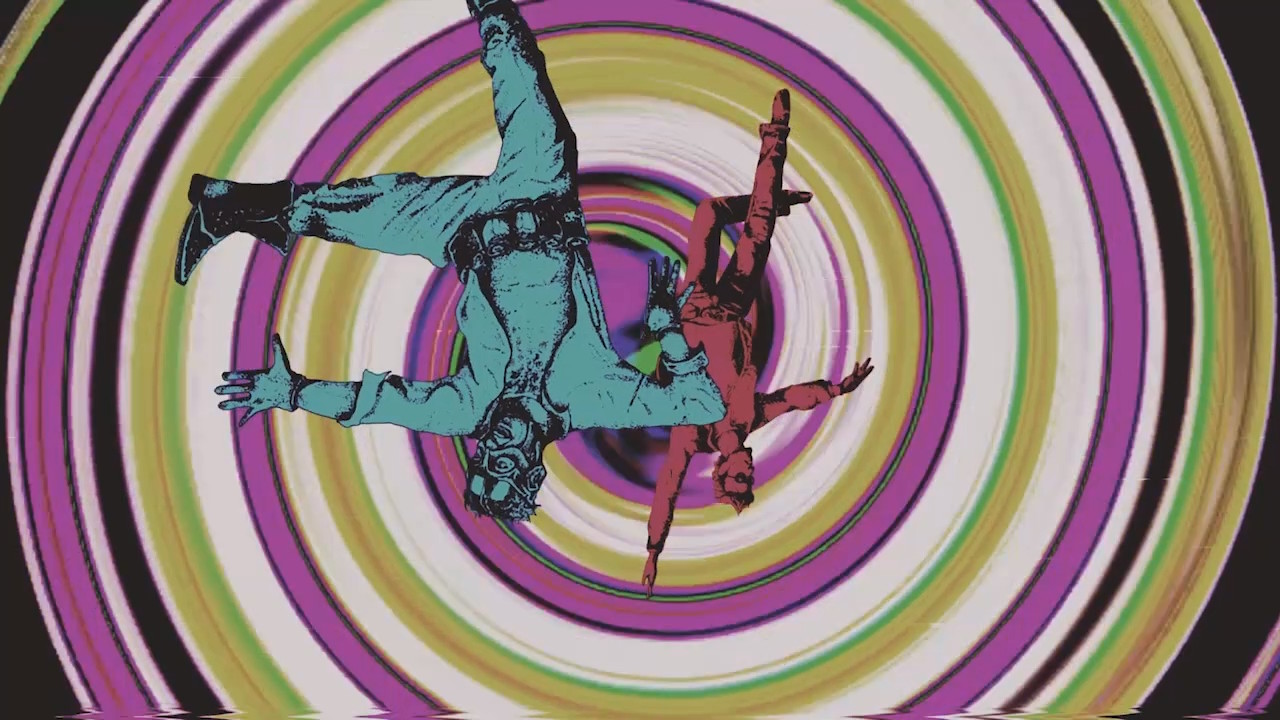 For starters, it should be known that Travis Strikes Again: No More Heroes isn't the third chapter in the series. Think of it as -- in Square Enix terms -- Chapter 2.8, where what occurs in this story will bridge towards the true next installment in the franchise. It all starts out where Badman, father of Bad Girl from Desperate Struggle, drives out towards the middle of America to seek vengeance against Travis. Our anti-hero has since secluded himself from the killing industry, living out his retirement in a trailer playing indie video games. When Badman attacks Travis, the two of them scuffle until a game system called Death Drive Mk- II sucks them into the world of retro gaming.

This cursed console, which was never actually released, has six titles made for it, so it's up to Travis to collect the remaining ones to fully unlock & reveal its full back story. Those who manage to collect and beat its six games in full will be granted a wish, although that's not all that might happen. In true Suda51 fashion, there's a larger reason behind the Death Drive Mk- II's mystery and why it never reached public hands, reaching out towards even the highest branches of American government. But knowing Travis, he just has to keep on moving forward to get his gaming and killing fix on. 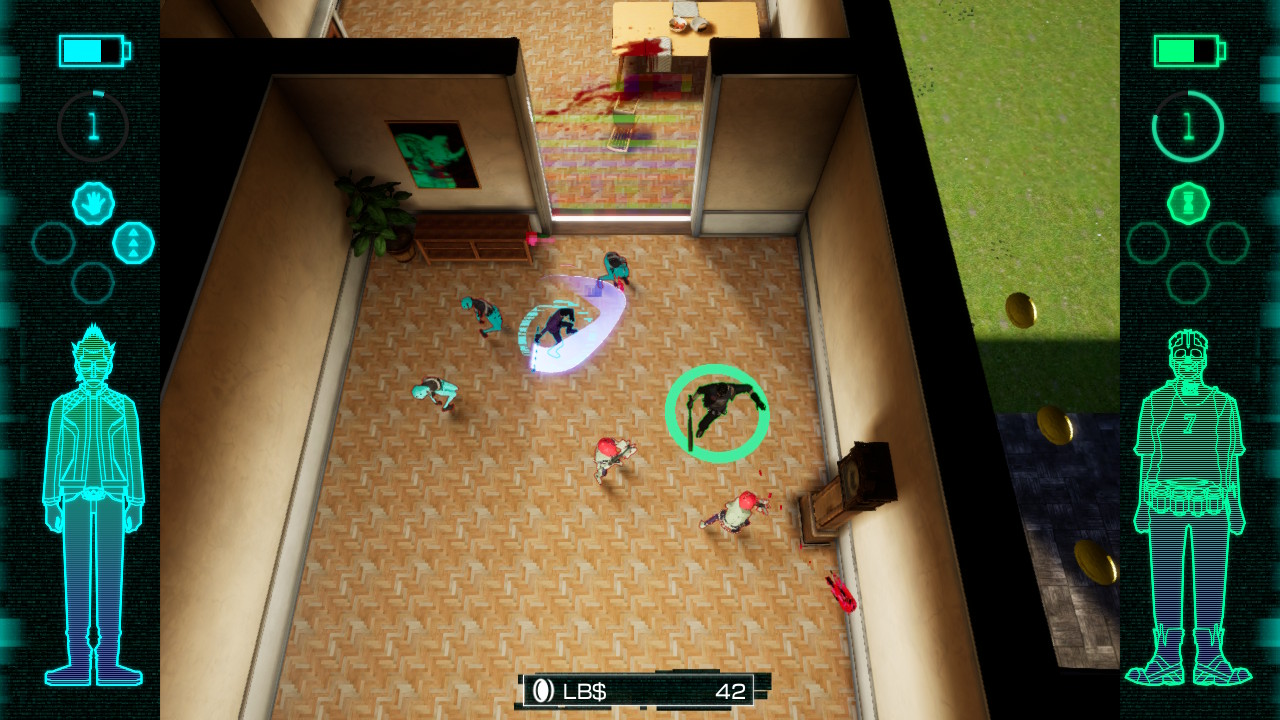 Taking on more of a top-down approach to its presentation, Travis Strikes Again has you running through each of the six games hacking and slashing through the various Bugstreet Boys and other sheepish baddies that are running amuck. From roaming a console port of a classic arcade game and solving a serial killer mystery to taking part in a futuristic race, Travis goes through many a hoop and hurdle to face off against the final bosses in each new world. As he cuts his way through, players can level him and/or Badman up, as well as earn special chips that will grant them some extra power. Explosions, lasers, turrets, and even a good old-fashion quick dash are just a few things that you'll be able to use in close quarters combat. If you're able to stab enough, you'll also unleash a killer combo technique that may have Travis transform into a technicolor tiger of badassery!

Gameplay-wise, Grasshopper Manufacture manages to keep to the spirit of the original No More Heroes. Watching as Travis slices his way through enemies is vey thrilling, bringing to mind the famous Crazy 88s scene in Quentin Tarantino's iconic Kill Bill. The new powers don't take too long to master; all one needs to do is make sure Travis is standing directly at his target and let it loose. Those who play with the Joy-Cons in hand will be glad to know that the Beam Katana charging technique still works like a charm; gamers who play with the Pro Controller might have some issue holding down one joystick and wiggling the other without some hinderance. 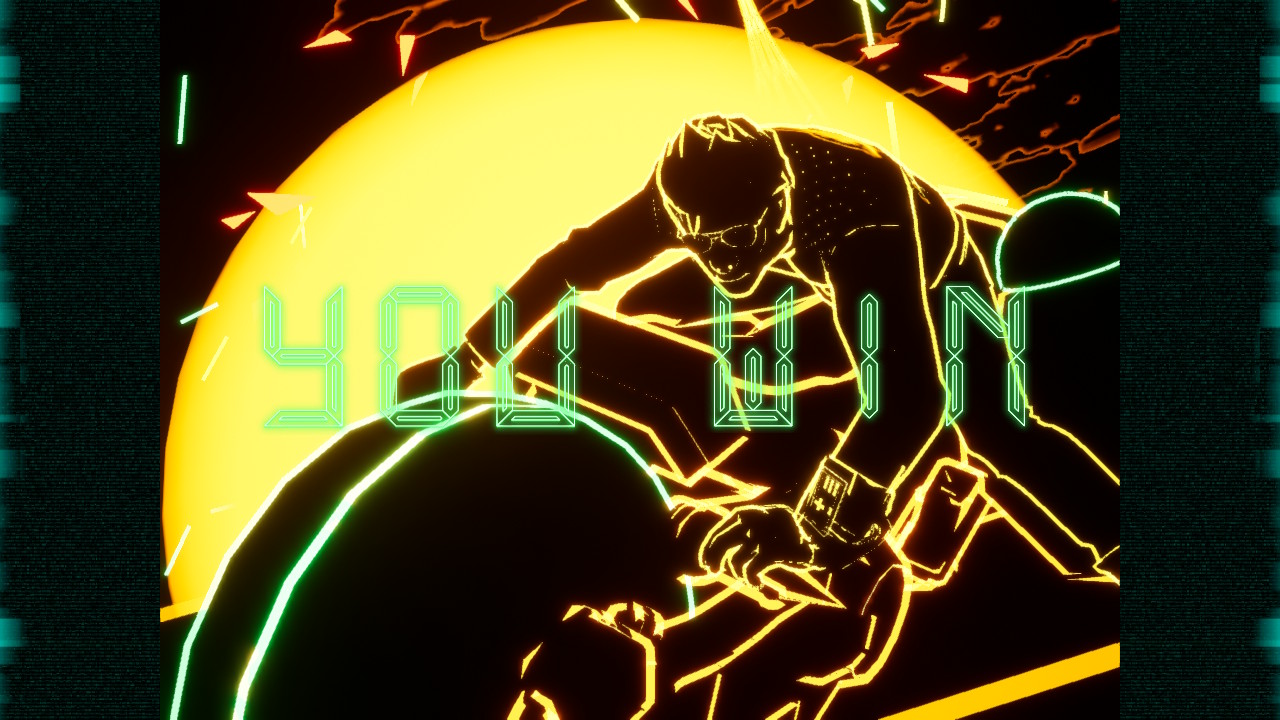 Although the majority of the game is mostly all hack-and-slash, props must be given for how each title Travis dives into has its own personality. Travis Strikes Again does its darndest to give each world its own fengshui, from "Electric Thunder Tiger II"'s nitty-gritty Running Man-styled realm to the old-school Resident Evil visuals in "Coffee & Doughnuts". Being able to take part in legit races in "Golden Dragon GP" also has its thrilling callbacks, ranging from its Tron-like style to the F-Zero level of speed it delivers. But even through all its fun gameplay, the best part about this game is its story.

Told through a MS-DOS-like visual novel, Travis Strikes Again has the titular character roaming all over the world finding the Death Balls with his talking cat Jeane. Here Travis crosses paths with just about every other character that's connected to Suda51's game catalog, from a trio of folks from Killer7 and Killer is Dead's Mondo Zappa to having The Silver Case's own Kamui Uehara aid you in your quest to find all the balls. Almost everyone that's been a hero/anti-hero in a Grasshopper Manufacture title appears here, linking all of these crazy worlds together in one hilariously cool story. (Although there is a Juliet in the "Hell's Chainsaw" chapter, I'm on the fence as to whether or not it's Juliet Starling from Lollipop Chainsaw.) 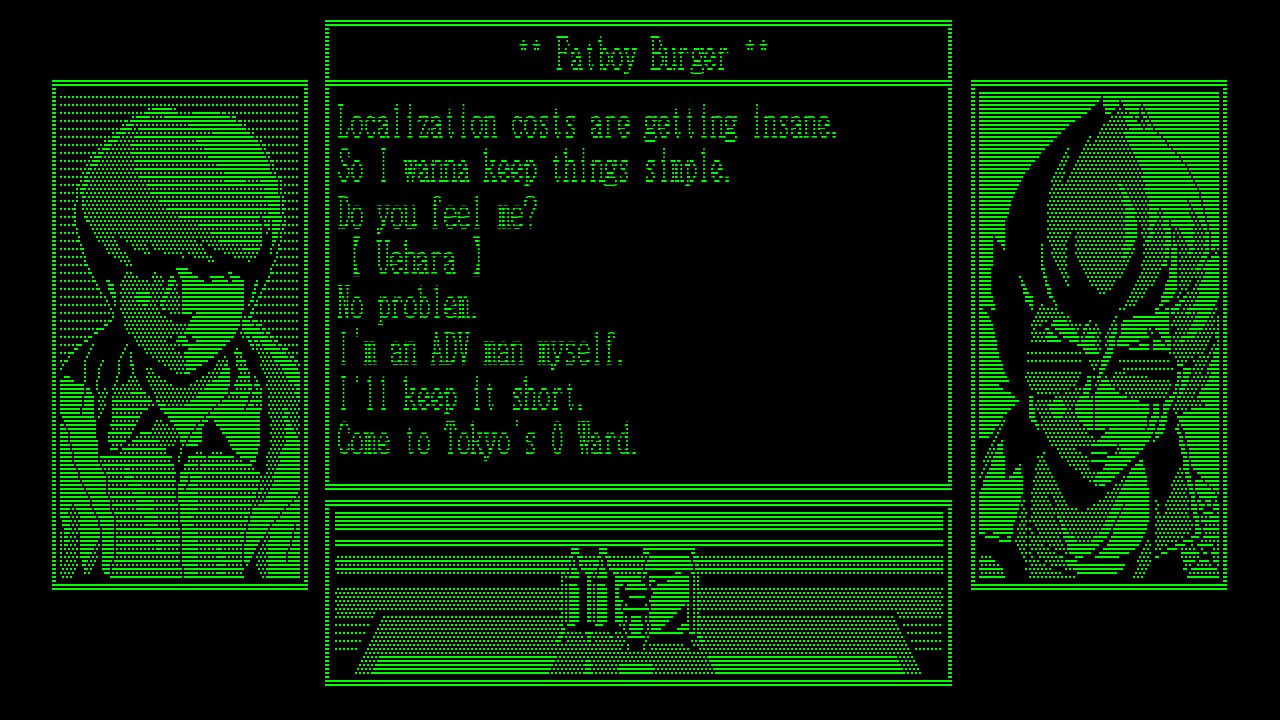 Of course, it's not just in this story where you have these cross-worldly interactions. One of Suda51's most under-appreciated titles is brought to life in a pseudo-sequel of its own. While I don't wish to spoil it here, let's just say it requires dealing with one Big Boner of a boss. The best cameo comes right near the end, with Travis interacting with arcade cabinets featuring characters from what I can only reveal as Devolver Digital's golden boy of gaming.

In a big way, Travis Strikes Again gives nods to the many great and varied indie games that have come out in the last nine years since we last saw Mr. Touchdown in action. When you collect money, you can use it to buy t-shirts in your trailer sporting some of the indie world's best titles. From pedestal-builders like Undertale and Hollow Knight to more modern retro-styled classics like The Messenger and YIIK: A Post-Modern RPG, Suda51 finds a way to tip his hat to some of indie's best & brightest. (I personally spent most of my time donned in VA-11 HALL-A and The American Dream VR shirts, the latter of which featured a Bible with Suda51's name attached as its author.) 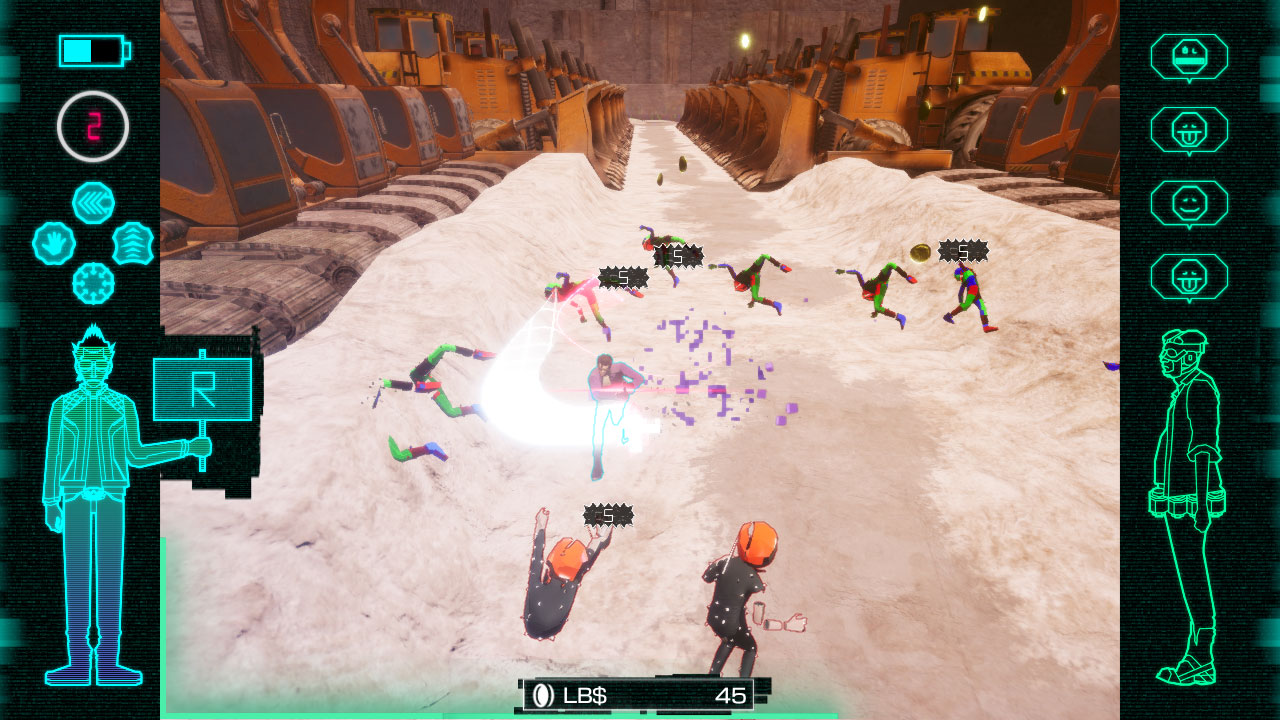 Of course, with all of its pomp and circumstance, there is a flaw or two in this game that must be mentioned. While I personally didn't have too big of an issue of it, the hack-and-slash gameplay mechanics can get pretty repetitive. Roaming from one area to the next, all you do is just cut away at evil's fat that stands in your way. Boss battle-wise, I didn't feel too challenged by what was occurring, save for maybe the "Golden Dragon GP" fight that had me die a couple of times. Other than that, once you figure out the pattern of each boss, it becomes very easy to take them down.

Travis Strikes Again: No More Heroes will take you roughly 8-9 hours to complete. Although there isn't too much to revisit, players can go back and find Travis's cat Jeane for some extra powers, as well as tackle the game in co-op with a friend playing as Badman. DLC will be arriving shortly to add a couple more levels, not to mention two familiar faces from No More Heroes added to the mix.

Travis Strikes Again: No More Heroes is Suda51's way of embracing the indie game community, giving way to some great storytelling and fun gameplay. While it's not the true comeback of Travis Touchdown that we've been waiting for, what's on display will have fans of both the franchise and Grasshopper Manufacture on their toes with pure delight. However, for those wanting a true new No More Heroes, I advise you to stay after the credits for a Marvel movie-level mic drop...