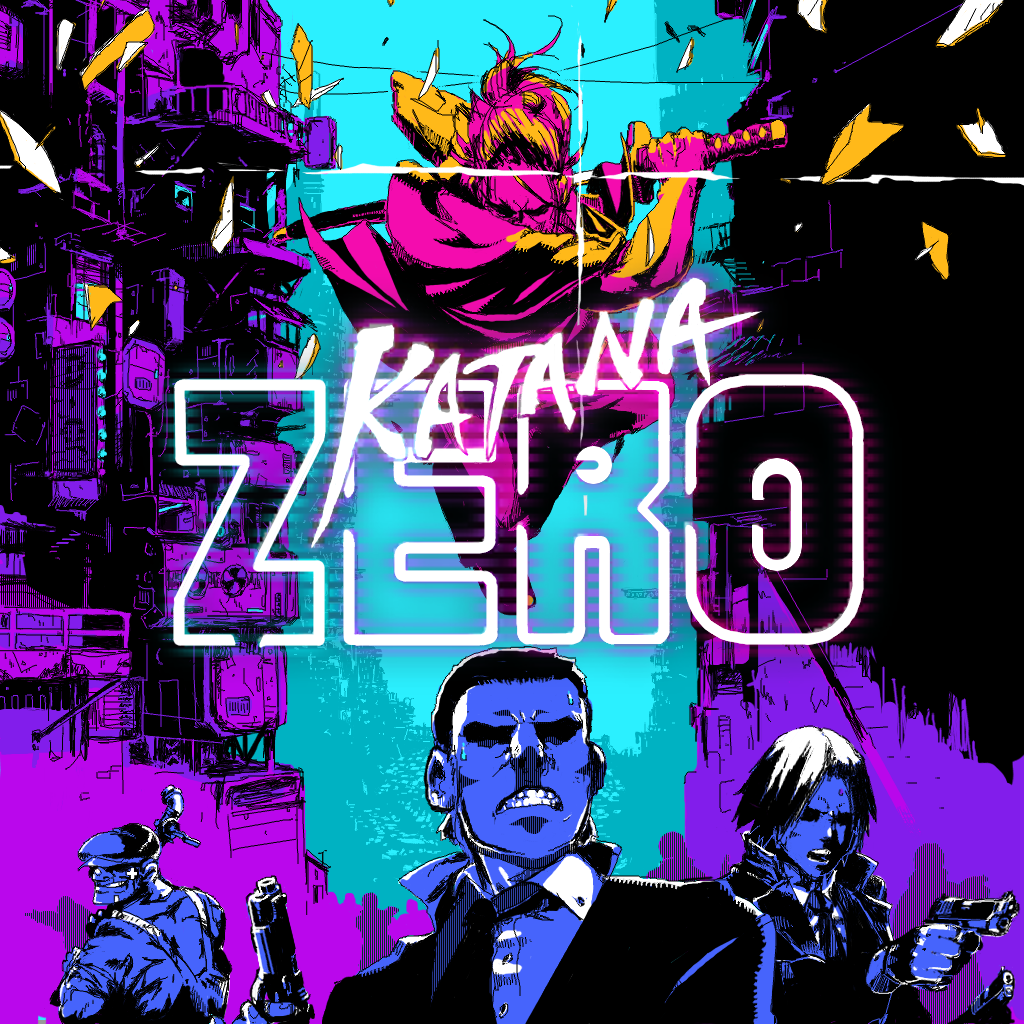 A game like Katana ZERO is a tough one to talk about. It's not because there isn't much to say about it; quite the opposite, actually. But Askiisoft has wielded a mighty blade with this title, one with many a crevice, knick, and bloodstain that each tell their own origin story. The problem is how much of Katana ZERO should be brought to light, and how much of it is best stayed in the dark for others to find for themselves.

For starters, let's talk about how the game Katana ZERO works. In a very similar fashion to Hotline Miami, players take control of an assassin with a knack for one-hit kills. (This also means you die if you get hit once, too!) In every room or area, you are to cut your way through just about everyone that's on-screen before you can move onto the next section. Every time you die, you rewind and go back to the start of the section; succeed, and you'll be treated with a VHS-styled replay of your actions. 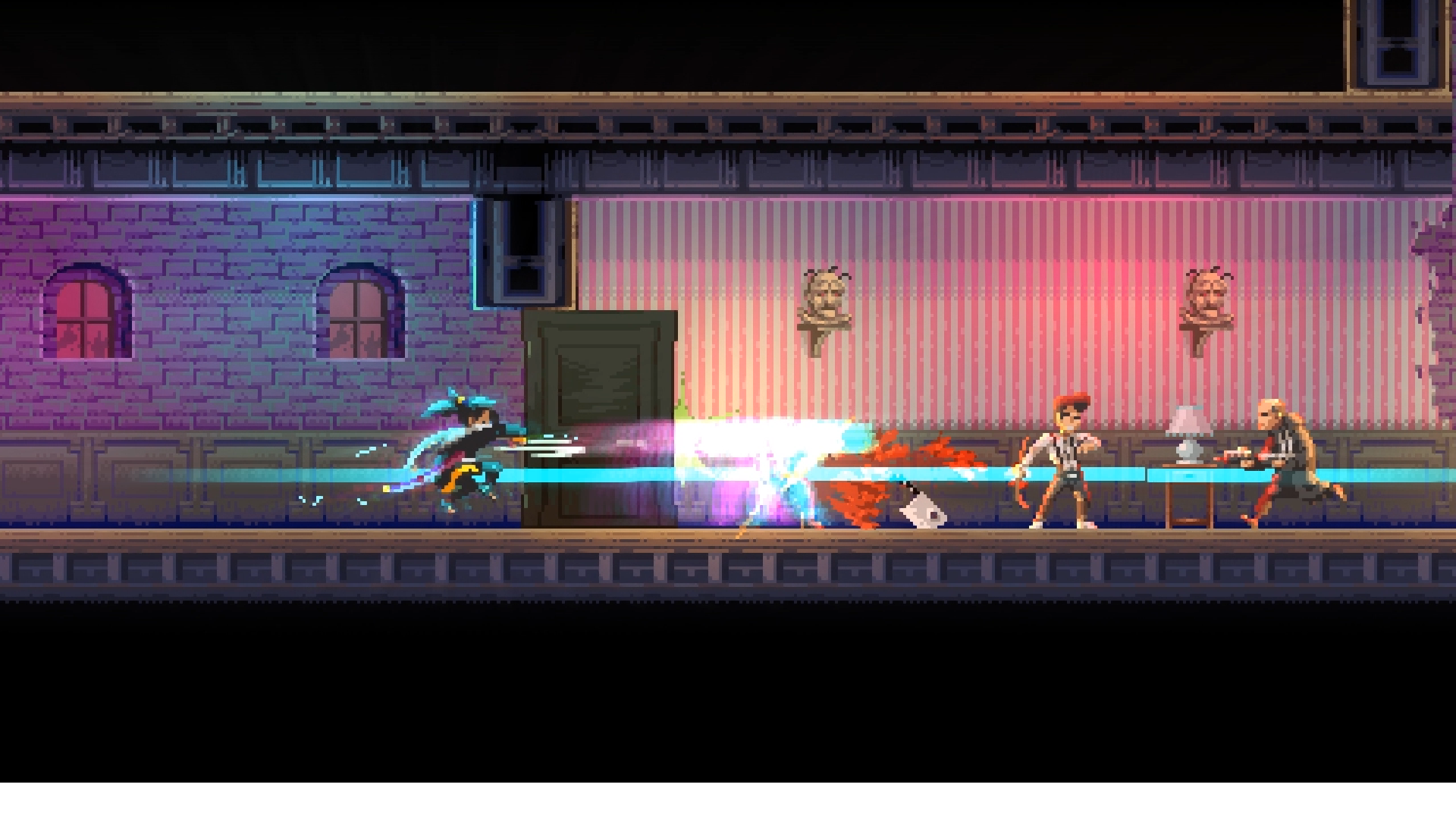 With the aid of a mysterious drug called Chronos, players will be able to slow down time to better their chances of survival. Evade & ricochet bullets, swoop past enemies, and even avoid deadly lasers & traps to make sure you live to see another mission to take on. This comes very handy later on, especially when levels become tougher and enemies aim to waste no time attempting to make mince meat of you. However, it's the whys of what's happening that make Katana ZERO's experience all the more interesting.

Your protagonist is a mysterious person of interest. He has seemingly lost his memories, and has a recurring nightmare every night involving a child hiding for his life. Each day, you visit your therapist, who not only gives you your daily missions, but also checks on your physical & mental health. These conversations with the shrink, as well as many of the others you'll come across, are where the narrative gets interesting. 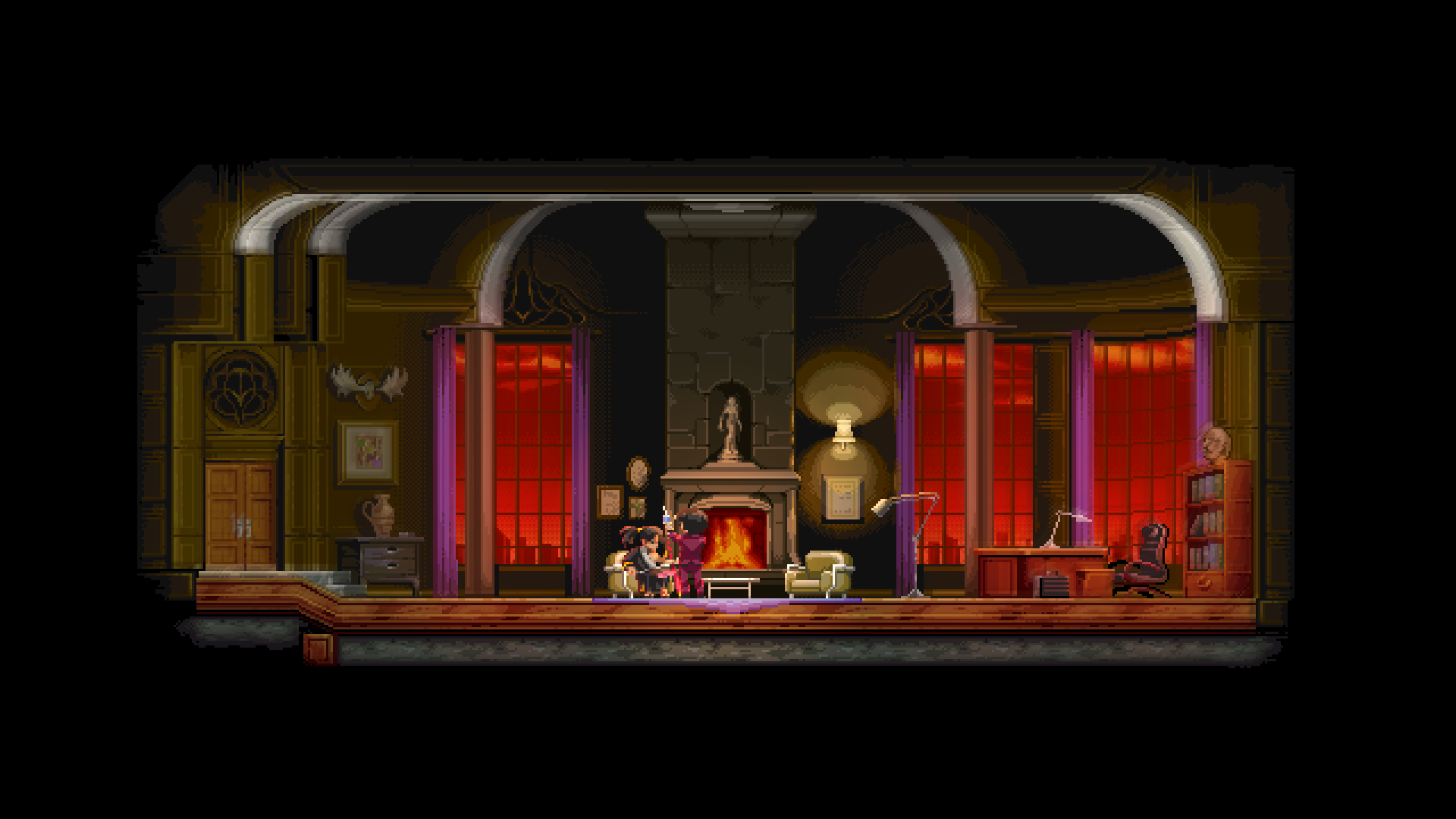 Players have the option to take their time with the dialogue or skip it entirely, but each have their own consequences. If you find yourself in a deep conversation with a front desk associate or your neighbor's daughter, it'll aid you in creating alibis and firm friendships. Rush through or interrupt a conversation, and it'll hurt your chances at getting out of certain situations unscathed. There are moments where interrupting will be the better option, but one much choose carefully when to listen or to carry on with your slaying.

It's hard to talk about Katana ZERO without ruining some sort of story aspect it delivers. As there are multiple endings to discover depending on your actions, it's hard to say which narrative is real and which is fake. Constantly, you'll question the mindset of your character, as you wonder if he's a real-deal samurai or just a lucky bum wearing a bathrobe. The flashbacks, mind games, and even hero/villain bantering will leave you with more questions than answers, but it's thankfully all very entertaining to experience. 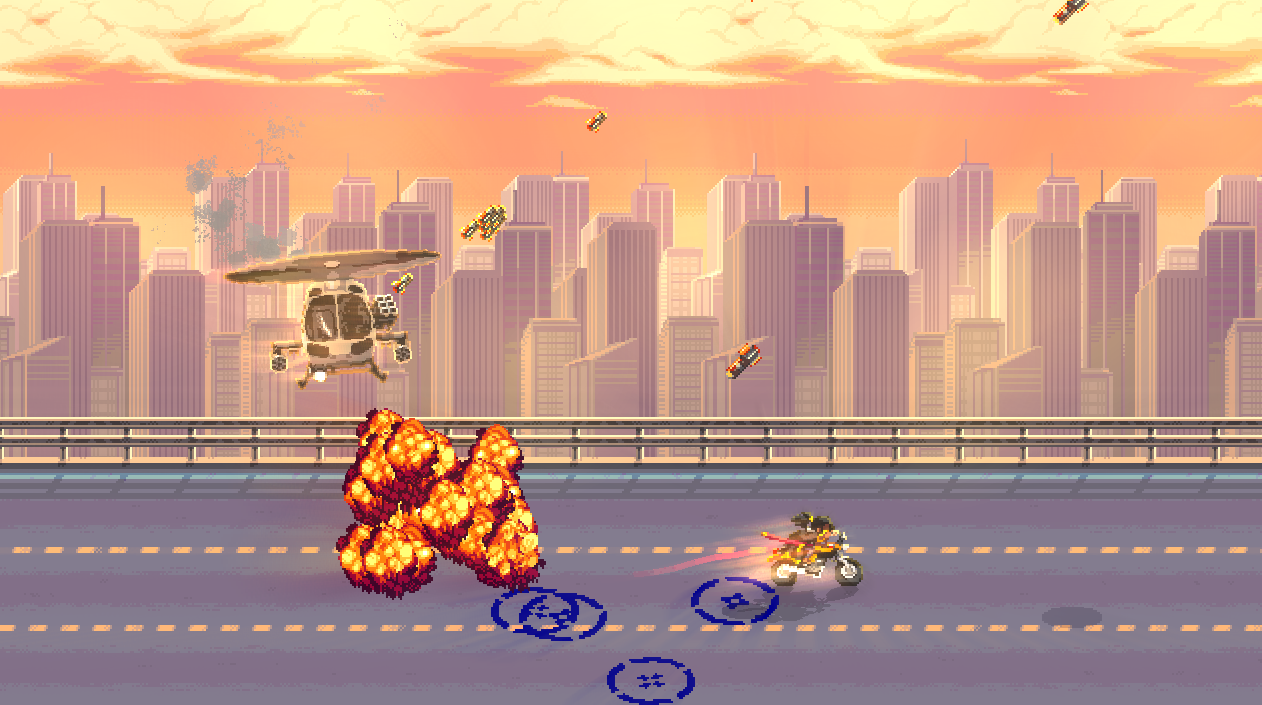 Gameplay-wise, the usage of your sword, skills, and even random objects lying around your area are fairly easy to figure out. Never once did I feel like I was forced to get my fingers tied in knots as I slain multiple enemies at once. The key to the game is to land that precise hit, and it's fortunate that it's always fun to discover both the right and wrong ways to clean up a room. Although later levels can get challenging, it never feels frustrating to have to start from scratch whenever you fail.

Shining through the neon and blood is Katana ZERO's soundtrack. With contributions from LudoWic, Bill Kiley, DJ Electrohead, and Tunç Çakir, the melodies that blast through as you stab and slice away are insanely bombastic. They're mellow when the mood calls for it, but reach levels of excitement when the violence reaches its peak. (If interested, you can grab the score from Bandcamp.) 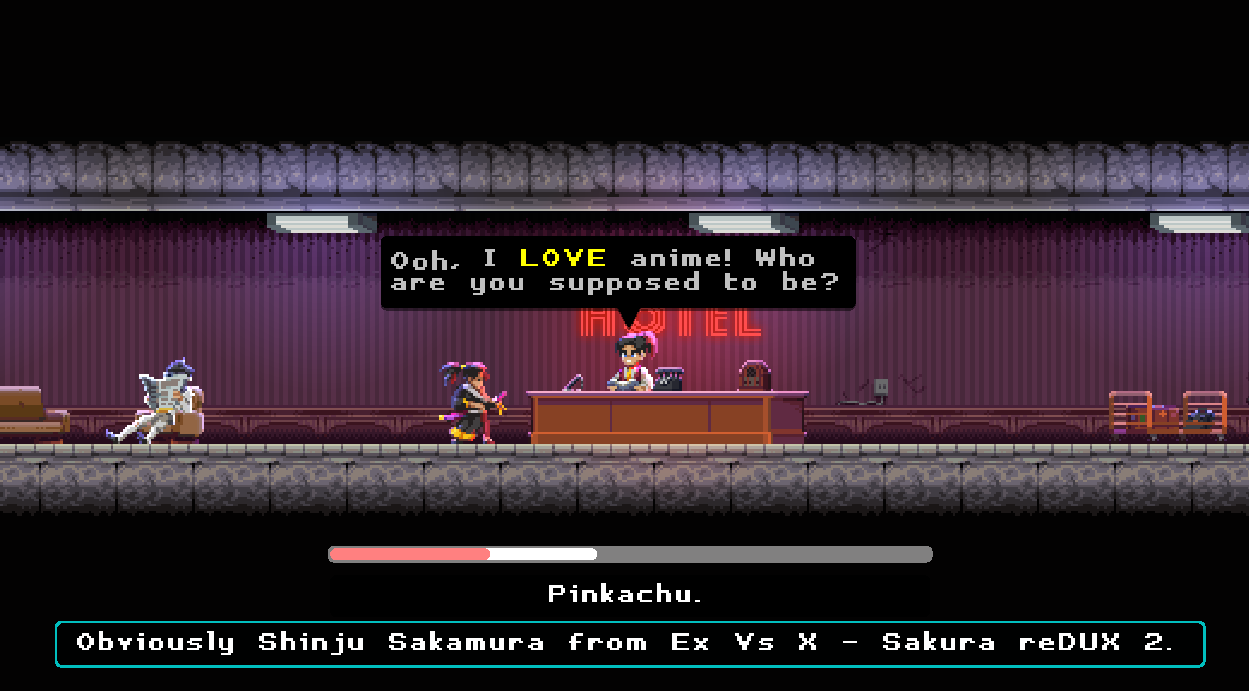 Katana ZERO will take you roughly seven hours to beat the first time around. Players can revisit past levels after clearing it, discovering various endings and situations that you may not have discovered previously due to how you played or took on conversations. Considering some of the endings you'll discover, it may be wise to revisit it to see if you can make rougher situations a bit better the next time around.

Askiisoft's Katana ZERO is one blood-soaked retro adventure practically everyone needs to experience. From its fun gameplay to deep storytelling, Devolver Digital has snagged yet another indie darling under their belt. Like a wandering ronin, Katana ZERO succeeds in nailing every aspect of its precise mission and technique!