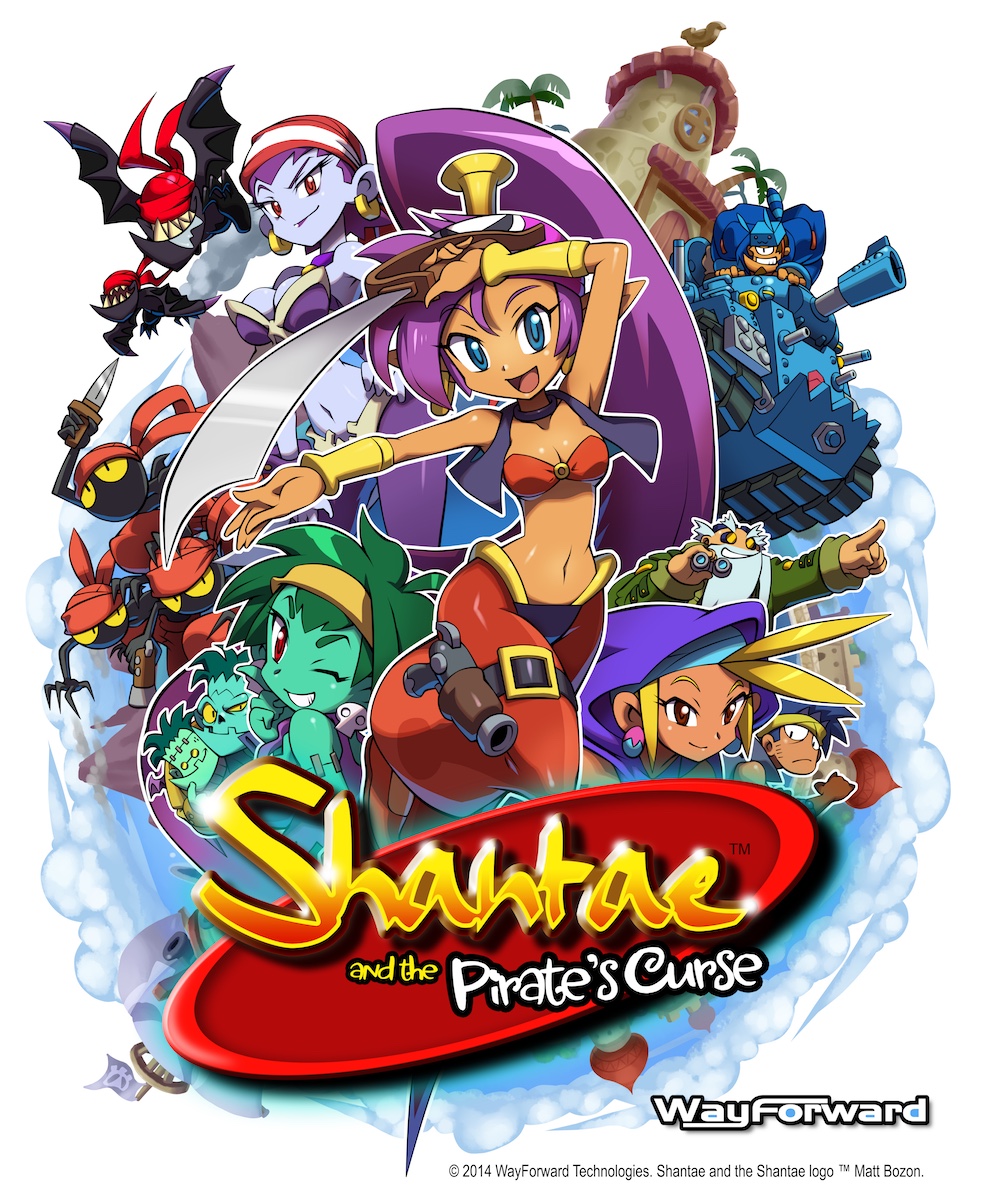 Whenever gamers think of the best heroines, some may look at Samus, Lara Croft, or even Bayonetta as the epitome of what a heroine is, mainly because they have a badass mentality. Well, sometimes you don't need to be a badass to be considered a great heroine. A great heroine looks at the face of danger and tries to overcome every obstacle thrown at her, even if she has doubts that she'll succeed. Sometimes all a heroine needs is a can-do attitude and the will to fight for those around her. One such character that comes to mind is WayForward Technologies' half-genie creation Shantae.

Shantae's history has been a little bit shaky. Her first appearance came back in 2002 in a Game Boy Color game, during a time when Game Boy Advance was all the rage. Despite some critical acclaim it wasn't all that big of a seller. It wouldn't be another eight years -- after one cancelled sequel after another -- until Shantae reappeared in Risky's Revenge, which gained a lot more critical acclaim and raised the half-genie's cult status to a far bigger level. Four years later WayForward brought forth the third installment: Shantae and the Pirate's Curse, which is just getting an Xbox One release this week. It may have taken well over a decade, but it feels like the belly-dancing heroine has finally been given her well-deserved dues. 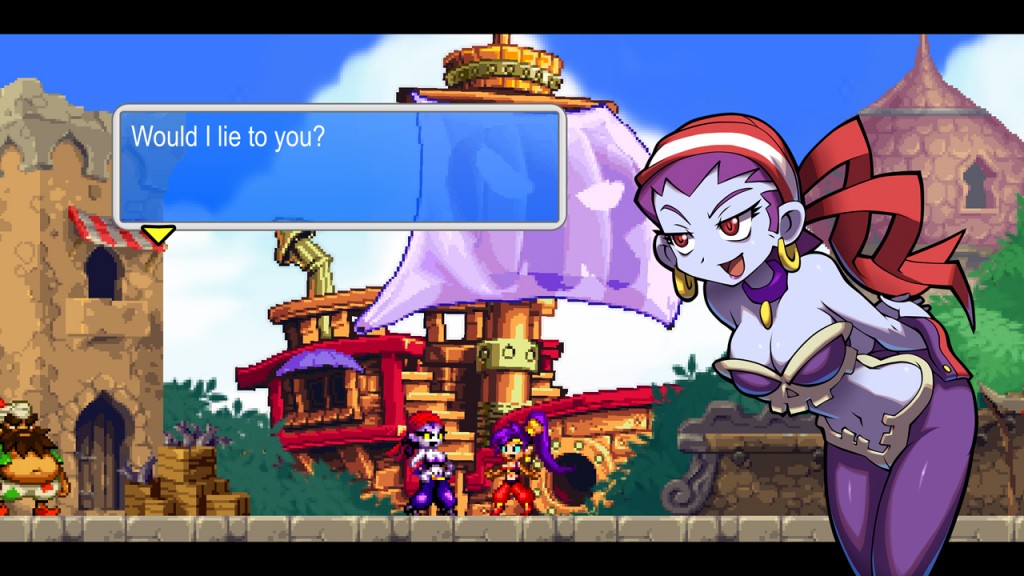 Taking place after the events of Risky's Revenge, Shantae and the Pirate's Curse finds our title character struggling to live life as a regular human. Waking up to the sound of cannon fire Shantae runs into Scuttle Town and finds the Ammo Baron trying to take over. After some miscommunication it turns out the town was legally bought, which forces the former half-genie into a legal bind. While trying to relax with a warm bath Shantae is captured by her arch-nemesis Risky Boots, who accuses her of taking all her stuff and her Tinkerbat henchmen. However the appearance of Dark Magic reveals that the Tinkerbats have been transformed into Cacklebats, and upon further investigation the culprit behind it all is her former (and very dead) boss: the Pirate Master.

As Shantae players must traverse through various islands to find Risky's weapons and defeat the evils that are running amuck. Since Shantae lacks her magic, players must use Risky's weapons that are found throughout the game to defeat enemies, collect Heart Squids, and suck up all the Dark Magic flying about from a defeated Cacklebat with your magic lamp. Also hidden throughout some of the levels are hidden items, which can be returned to various Scuttle Town citizens. 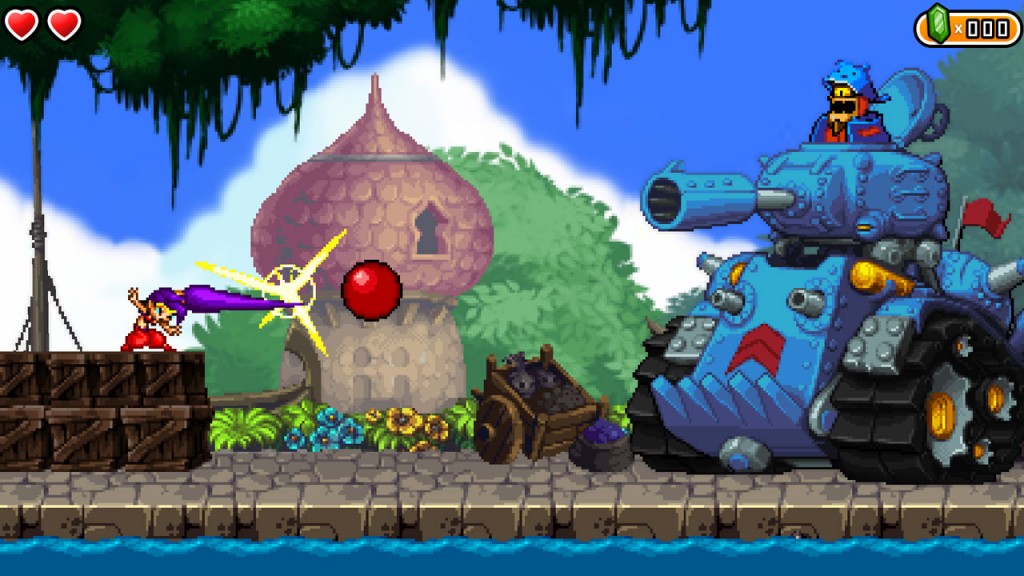 Shantae and the Pirate's Curse is a game that gets challenging as you progress, but it's a steady incline compared to most titles that like to jolt up the difficulty out of the blue. Sure, there are still some frustrating parts to the game (especially in later levels), but what is needed to get through these tough parts is sometimes handed to you just as soon as you need them. Whether it's to float via Risky's Hat or be given a running start thanks to Risky's Boots, the items that you earn as you progress will be very helpful to those that may find themselves in a bind. All it takes is a bit of brain power and a quick review of the area to get to the next destination.

However that's not to say that the game likes to hold your hand during its entire duration. Rather, Shantae's latest adventure takes hold of the player the same way a parent teaches their kid how to ride a two-wheeler. At first they're holding the back evenly, and as the player pedals faster the game lets go and sets them soaring towards their next point of interest. Sometimes you'll fall, but the game encourages you to get up and try again until you succeed. All you need is swift determination. Also, lots of potions, foods, and secondary weapons to replenish and protect you from permanent death. (You'll definitely need those pike balls during the final third of the game, that's for sure!) 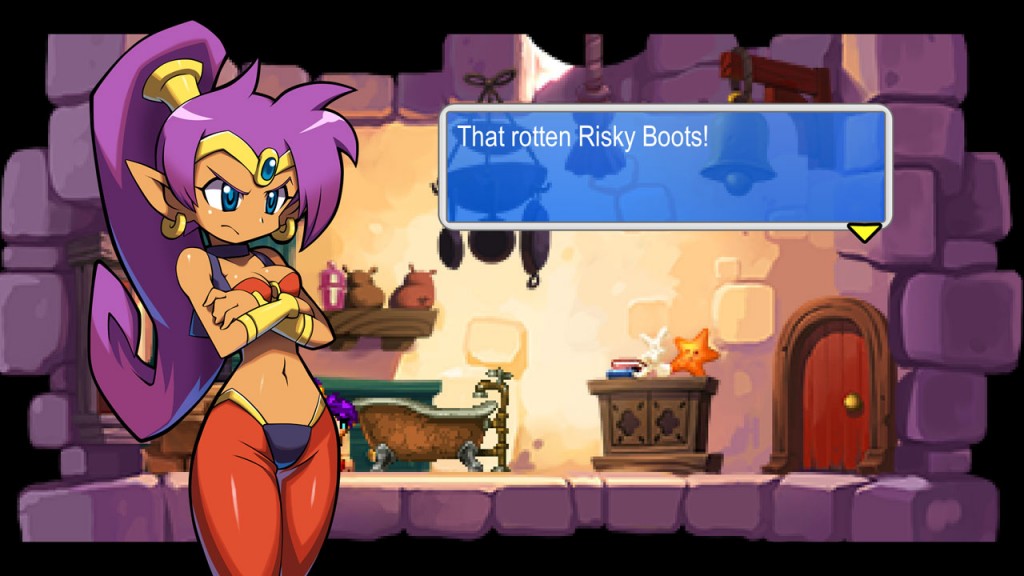 Surprisingly the most fun I had with the game came in the form of the boss battles. In most cases this is where I'd fling my controller with rage, as they can be rather unfair. However, as mentioned above, everything has a well-knitted strategy, and once it's discovered the only thing that'll be required is a good set of timing skills. It's also here when the story's writing likes to shine, especially when it comes in the form of a certain red octopus whose in a desperate need of a vacation.

Control-wise Shantae and the Pirate's Curse is one of the more comfortable experiences I've had with platformer games. Never did I feel the need to button-mash, nor was it complicated figuring out which button did what. Out of my entire time playing I may have mixed up the layout maybe four or five times, which is a lot less than what I'm usually experiencing. One of the key reasons is that -- outside of the jump mechanism much later on in the game -- rarely are two commands set upon one button. 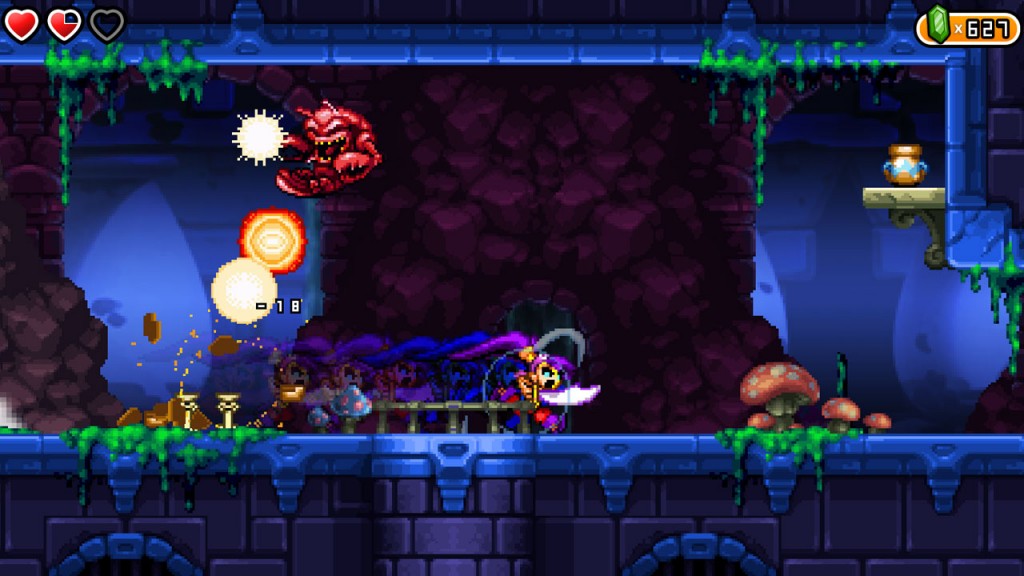 Porting the game to Xbox One from its 3DS counterpart the game still has its retro-looking charm to it. Coming off like a lost Super Nintendo relic Shantae and the worlds she traverses are brought to life with some fine pixelated detail, and while it may not have the polish of something like -- say -- one of Devolver Digital's recent games it still has enough character to help it stand out from the rest of the pack. While it would've been cool to see the game be given a full-blown image upgrade onto consoles, what is delivered here most certainly suffices. (We'll have to wait for Half-Genie Hero to come out before we can truly experience a high-definitioned Shantae game.)

When it comes to game soundtracks, no one does it better than Jake Kaufman. A regular in the WayForward realm, Kaufman's score here is filled with beautifully exotic melodies, upbeat anthems, and some cool battle themes that fit in nicely with the more intense moments of the game. Voicing Shantae, Cristina Vee (K-On!!, The Familiar of Zero, Puella Magi Madoka Magica) delivers a can-do attitude filled with that right amount of friendly concern for her friends and the town she lives in. 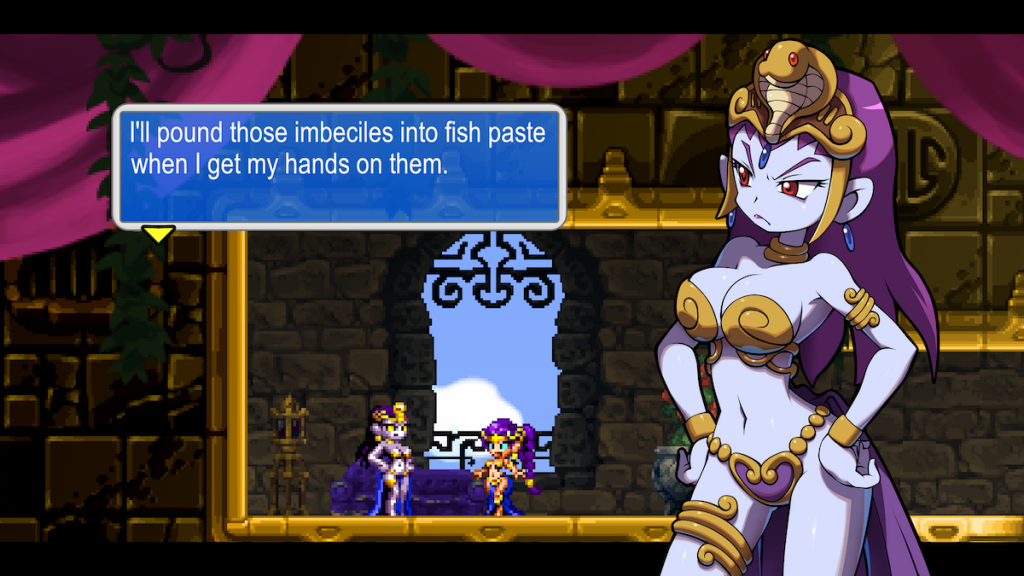 Playing through Shantae and the Pirate's Curse the first time around will take you roughly 10-12 hours, and that's if you at least find all the Cacklebats and most of the Heart Squids. Once you've finished the game, you'll unlock Pirate Mode, which gives you all of Risky's weapons from the start in order to attempt that perfect speed run. (It's apparently possible to be the game in two hours under this mode, but I've yet to see it.)

Shantae and the Pirate's Curse serves as a reminder of why I fell in love with video games in the first place. From its great platforming mechanics and cool power-ups to the memorable characters and catchy soundtrack the latest adventure with gaming's best half-genie is straight-up one of the absolute best you can experience. If you haven't yet brought Shantae into your life, then now is the time to dive into the world of this purple-haired heroine.