Happy Tuesday, everyone!  Some new releases hit stores today, including a very eagerly awaited Red Steel 2.  The sequel uses the new Wii Motion Plus and it looks to be the sword-fighting gun-slinging action title we were hoping for back in 2006.  This got me thinking about all the promising peripherals, past and present (and even the future), brought to us from Nintendo and their support, or lack thereof.  From the NES Zapper to the Wii Balance Board, a lot of plastic has built up in my house over the years, but how much of it was put to its best use? 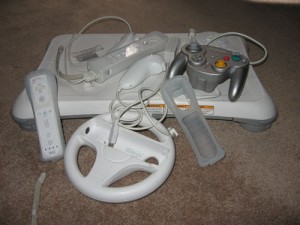 Thinking back, one of the first things I remember getting was the NES Zapper controller.  While it certainly got plenty of use in my house, it did so single-handedly with just Duck Hunt.  This was not the only game that used it, Hogan’s Alley and Wild Gunman to name a few, but it definitely helped shape many future games to come.  Fast forwarding a bit, Star Fox 64 is released and packaged with it is a little thing called the Rumble Pack.  Feeling the feedback of what was happening on-screen was amazing and I still get goosebumps playing that game.  Not only was the support for this little guy wide, but it has since become a staple of any modern gaming controller.

These add-ons haven’t always been all sunshine and Rumble Packs.  There have been a few that saw the light of day and vanished as though they’d never appeared.  When Pokemon Stadium came out for the Nintendo 64, packaged with it was the Transfer Pack.  This peripheral allowed you to import your Pokemon into the game to battle in 3D.  The result was very exciting, but didn’t offer much outside of this context.  In America, only a handful of games were ever supported and so the Transfer Pack went quietly into the closet.

Recently, we’ve been getting quite a few new toys to play with on the Wii side of things.  With the Classic Controller, Balance Board, Wii Zapper, Steering Wheel, Wii Speak, Wii Motion Plus and soon the Wii Vitality Sensor, I have run out of room in the little cabinet where I put my controllers.  So far, with Wii Motion Plus, I’ve been having Transfer Pack flashbacks where I should be thinking Rumble Pack.  There have only been a handful of titles thus far that have supported the extra-long peripheral and it has been out since June of last year.  While I still have faith that it will catch on, it may have some catching up to do with Playstation Move and Project Natal not too far off. 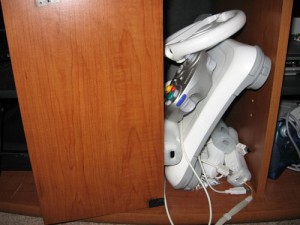 Personally, I am hotly anticipating the new Wii Vitality Sensor.  While I’m not quite sure how it is intended to be used, I think there is a great deal of possibility there.  I love horror games and the idea of playing one that knows when it is successfully scaring me is both terrifying and thrilling all in one.  The possibilities are endless and it seems like Nintendo has quite a few tricks up their sleeve yet to further innovate.  If only I could innovate myself a bigger cabinet, then maybe I could have room for all the goodies I know are soon to come.

PAX East Preview: What I Want To S...