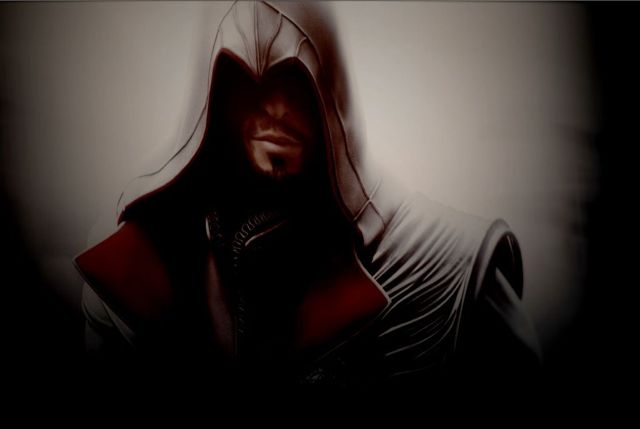 Alright, the first day of E3 is in full swing: we live blogged the Nintendo and Sony media briefings and while Hamsterman2049 is off running around the North Hall today I am in South Hall at the LA Convention center and patiently waiting for my turn to play the (due out in November 2010) Ubisoft title: Assassin's Creed Broherhood.

While I was not a fan of the original Assassin title Creed definitely made a gigantic positive impression on me. I came to love Ezio Auditore in a way that many would more than likely label "unhealthy" and "borderline psychotic" but Ezio is one of those characters that you can just get behind. He's an underdog from the start. He's handsome. He's deadly.

Ezio is just sexy. In Brotherhood Ezio is not alone. Brotherhood features a rich single player campaign as well as an interesting multiplayer side which has been needed in the franchise since Assassin's Creed 2. I had hoped the multiplayer gameplay piece would have been added into AC2 as a DLC option, but going all out and creating a new title around the idea of multiplayer action suits me just fine.

The Hands On Experience

After the Sony media briefing I made a beeline for the Ubisoft booth in hopes of getting my grubby little mitts on the game and I was in luck. After waiting in line for about an hour I was able to join a group of five other journalists to try our hand at what I can only describe as a game of seek and destroy. In this multiplayer game we were each assigned a person to kill (in the top right corner of the screen our contracted target is pictured) and while there are only seven character types to choose from, the map populates with multiple civilian characters in those various types (engineers, courtesans, etc.,) making it more difficult to spot the person you are supposed to kill. While this is going on, your character has a contract out on your head, so it is literally hunt while being hunted. In this mode of play (this is a game after all) you gain points by successfully assassinating your target, how you assassinate them, how well you elude your own assassination, and how many assassinations you can complete in the time allotted. It was fun to play, but there was a lot to manage: the compass in the middle of the screen indicating how close I was to my target, finding groups to blend in with or haystacks to hide in to avoid assassination, the blurb on the screen that attempted to alert me when my pursuer was on my tail (it failed miserably by the way) oh yeah, there is also an indicator that let me know when a target was above me or below me. Overall, I enjoyed the hands on time. The game looked amazing (I was playing a PS3 build) and the world itself felt exactly like the environment from my last outing with Ezio which I loved.

I think Assassin's Creed Brotherhood should be on your to play list, especially if you have an Xbox 360 or PS3.