At the end of the Nintendo media briefing, they allowed us to take a second to get our hands on their amazing new handheld system.  While what I was was characters doing short animations on the 3D screen, I was still quite impressed.  Nothing could have prepared me, however, for what I would see when I got to the front of the line visiting Nintendo’s booth on the show floor.  Stepping up onto the platform where they had a line of 3DS demos running, I thought I may be seeing the same demo I saw before, but I couldn’t have been more wrong. 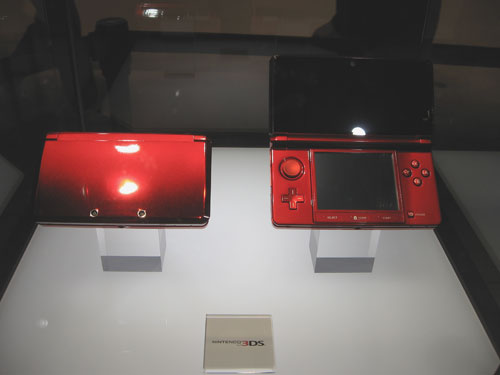 The first 3DS I walked up to was running a demo of none other than a graphically-revamped 3D version of Starfox 64.  This being one of my favorites of all time, I was pretty stoked to play it.  It’s hard to imagine from the videos and even from that short demo at the media briefing, but the 3D effect really adds a lot to the experience.  Since in a game like Starfox 64, the camera is already set so that you are moving forward, it almost feels like you are traveling along with the ship.  The demo featured the Corneria level and while the familiar voices of Fox and the gang did not appear, it was still as awesome as ever.

One of the new features I also got to enjoy while gunning down Andross’ goons, was the new joystick and it feels fantastic.   It’s flat enough that it doesn’t make the system ugly or unplayable, it has an indentation so that your thumb stays squarely inside it while you’re using it and it is incredibly responsive.  The rest of the controls seemed fairly similar to the DS, with the exception of the three buttons below the touch screen.  I actually had a decent amount of trouble locating the start button at first, but I suppose I’m just used to it being in a different spot.

After moving on from Star Fox, I went over to another 3DS that looked to be showing another video demo.  This time however, it was no mere video.  Gameplay footage of a couple of tracks from a 3D Mario Kart was playing on the system and even more than before I was completely blown away.  Sitting there staring in awe, I felt like I was riding in the kart with Mario and Luigi as they raced down the track.  Even though it wasn’t interactive, I still couldn’t tear my eyes away from the screen.

After somehow putting down the Mario Kart video, I moved on to the next table which had a gameplay video from Kid Icarus: Uprising.  It featured Pit using a variety of projectile weapons and showing off his flying skills.  To answer the question in your mind, yes it does look as good as the trailer from the briefing.  Hon, estly, I was a little skeptical of them putting Pit into a new game on the Wii, but I think his is the perfect franchise for the 3DS.

The next system I got ahold of wasn’t at a table, but it was attached to a person through a metal cable.  This time they were demoing the camera feature by allowing you to take a picture of the aforementioned person and view it in 3D.  While this is mainly just a gimmick, it was still quite a thrill to see your pictures that way.  Something I will probably use quite a bit when I pick it up.

The final thing I would like to mention seeing in that short 20 minutes, was probably on of the most exciting.  They had set up another video demo of a collection of classic NES games also in 3D.  Classic games like The Legend of Zelda, Metroid, Super Mario World and Mega Man 2 were all, quite literally, given new depth.  I’m very excited to see this and I now understand that perhaps this is where all the energy that would have been going into getting those games onto the DSi Store was being put.

All in all, this is the most excited I have been about a new product coming out since the Wii launched in 2006.  I will be there standing in line or camping out whenever it is they decide it’s time for the world to be allowed this awesome new toy.  So, buy your tents now folks, because you’ll have to fight me to the death for that space in line!  I’ll see you on the launch day!