I remember the days when I used to rent games rather frequently.  In those days, a game would come every once in a while that I enjoyed so much that I would rent it multiple times.  When I saw that one of them popped up on Nintendo’s virtual console on monday, I couldn’t help myself from grabbing it up.  Aero the Acro-Bat was a game created by Sunsoft back in the day for the SNES with the anthropomorphic animal with an attitude feel for it.  So, yes I did pick it up, but does it still hold the same fun today? 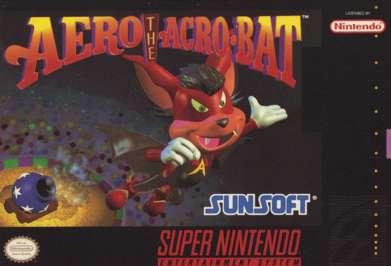 Back when everyone was looking to create the next popular mascot, there were quite a few strange characters out there.  Aero the Acro-Bat was by far my favorite of the third-party attempts.  Published by Sunsoft and developed by Iguana Games, the adventures of said furry winged mammal are platforming with a circus theme.  The art design for all of the levels is very good.  They’ve taken cues from Barnum and Bailey to craft a delightful and immersive world.  In the story, the circus that Aero is part of is being attacked by Edgar Ektor, an evil ex-clown who used to work for the same circus and now wants it shut down.  Ektor is definitely creepy enough to get those clown phobias going, but definitely not the worst one out there.  He also comes with a nemesis, Ektor’s sidekick Zero the Kamikaze Squirrel, and a girlfriend named Aeriel.

One of the things that really drew me in initially was the music.  It has one of those soundtracks where it will be stuck in you head, as it is in mine now, and will not leave you alone.  It is incredibly infectious, but it will drive you crazy if you’re exposed to it for terribly long.  The other part of it that is really enjoyable are the animations for Aero.  Every kind of movement and event is incredibly detailed and expressive.  All in all, it is both a fun game to listen to and look at.

The one thing that even I shall admit is a little flawed in the game are the controls.  Aero handles rather loose and floaty, which makes a lot of sense because he is a bat after all, but with the way the platforming is set up, it makes things more difficult.  Often times you’ll find yourself trying to get past a large pit filled with spikes that will kill you instantly only by jumping across on tiny balloons.  The controls are just out of the range of tightness that allow you to do it comfortably.  Also, he has this corkscrew move that he uses partially as a traversal technique and as his attack move.  Since the move is triggered by hitting jump twice, I’ve accidentally hit it when I didn’t mean to and plummeted to my doom.  All of that aside, there is a ton of variety in terms of the different circus-related things you get to do in the game.  Everything from jumping through rings of fire, to being shot out of a canon and even diving into a pool of water makes an appearance and keeps the atmosphere fresh.

Aero the Acro-Bat is not a perfect game.  It’s not even an awesome game, but if you enjoyed it back in the day or you are having a retro kick lately, then it’s definitely worth checking out.  For 800 Wii Points, it’s a pretty decent buy, but if you’re not a fan of occasionally being frustrated, then this might be one you might want to skip.  Now please excuse me while I attempt to get this music out of my head.