Limbo Is Not Braid

There has been quite a bit of talk about this years indie darling Limbo as of late.  Being quite the sucker for a game with an eerie atmosphere, I picked up the game and played through it.  One of the biggest things that people have been saying about the game is it’s the Braid of 2010.  While I can appreciate the statement from the point that it’s a fantastic indie game that has gotten a lot of critical praise, there is one point that I feel needs to be stressed when making the comparison.  Aside from some minor similarities, they are most definitely not the same game. 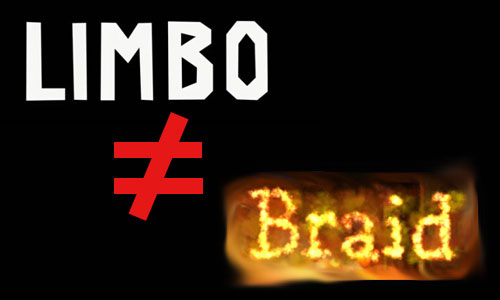 Another set of games comes to mind when I think about improper comparisons.  The software in question is Infamous and Prototype.  When they were released, the two games were touted as practically the same game.  While in both games you played as a  person who recently attains superpowers and wants to get to the bottom of said abilities by traversing a sandbox style city, when playing the two games you will find that they have a very different feel to them.  Similarly, with Limbo and Braid, you are playing as a man/boy looking for their princess/sister by walking through an atmospheric platforming world.  On the face of it, yeah you could blindly say that the games seem fairly similar.  The more you delve into the specifics however, the more you can see how different the two really are.

Let’s start with the gameplay of each.  In Braid, there is a much larger focus on the puzzle aspect of the game.  If you really wanted to, you could blast past everything rather easily, but you wouldn’t have beaten the game until you’ve collected all the puzzle pieces.  Limbo, on the other hand, is the polar opposite.  The entire crux of the game is progressing forward.  While you may need to go back for a missed crate every once in a while, it’s always about progressing and not about collecting.  In addition, there is a much greater sense of danger in the gameplay, which actually figures into my next point which is atmosphere. 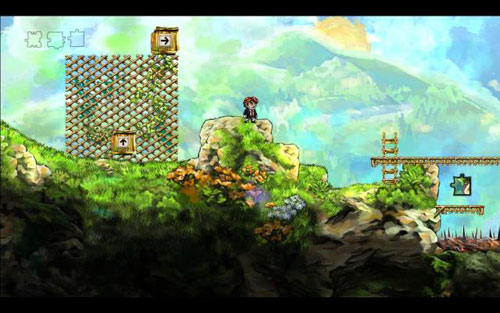 Both games have a fantastic atmosphere.  Braid has a feeling of wonderment and despair that does a great job of sinking in while you play.  Limbo, in contrast, has a similar feeling or curious wonderment, but it is accompanied by sheer terror.  While Braid has its own dangers associated with the world you’re in, none of them seem quite as dangerous as those in Limbo.  This feeling is because not only can you die, but you can be mutilated.  Quite often did I find myself being dismembered, disemboweled and many other horrifyingly gory deaths.  This instills a sense of dread that is just not present in Braid. 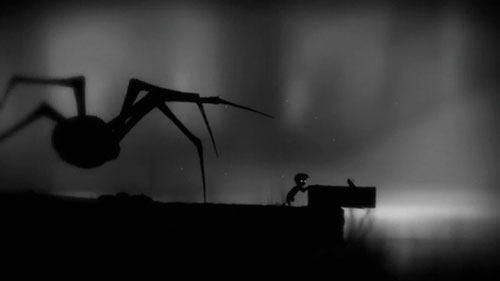 While the games are just not similar enough to be compared too closely, there is one thing that they have very definitively in common.  They are both fantastic games that deserve to be played by anyone that has the cash and the time.  If you haven’t picked up Braid by now, and you enjoy puzzle-based platform games, then I highly recommend it.  If you haven’t played Limbo just yet, then what are you waiting for?  It’s fantastic fun and worth every penny.  Now I will leave you with one last compare and contrast.  While the games both have five letters in their title, Limbo has two syllables instead of one.  Do the Limbo!

Getting High With Snoopy