HomeEventsE3E3 2011: Drop Buildings On Your Friends With Starhawk
by: Hamsterman2049
0
E3 / Video Games

E3 2011: Drop Buildings On Your Friends With Starhawk

The very first multiplayer HD home console game that I ever played was Warhawk.  I continued to play it, bought all of the DLC for it and rose to a fairly high rank within the game.  You might imaging then, that when they announced they were going to be releasing a sequel, I was filled to the brim with joy.  On my way to the booth to play Starhawk, all that I asked of it was to still be Warhawk at its core, but have enough of a change to make it not just a spit-shined patch.  I can definitely say that my requests were granted and then some. 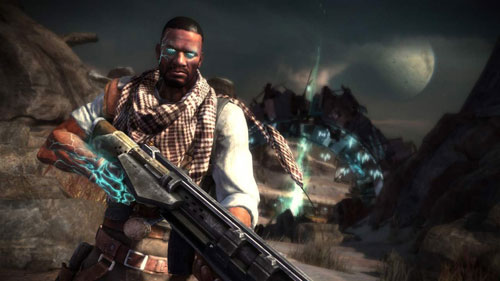 Warhawk was not an bad looking game by any stretch of the imagination.  The graphics were exactly what they needed to be and did their job quite well.  In Starhawk, not only does everything look a bit sharper with some better textures, but the designs are much more imaginative this time around.  This is in large part due to the new setting, which has given Lightbox Interactive a great opportunity to create a whole new world which still feels very much like it belongs in the same universe.  With that new world, not only can your Hawk be an awesome spaceship, but also a transformer.  I dare you to not think that is awesome.
Some of the biggest additions to the new game involve the gameplay.  One that really sticks out is the ability to drop in buildings.  When I say drop in buildings, I don’t mean that they magically appear when you create them.  They literally fall from the sky and slam into the ground ready to be used.  For a little extra use, you can actually take out your opponents Wizard of Oz style by dropping a building right on top of their head.  Similarly, when you spawn, you are dropped down to the map in a drop pod.  You can use this to your advantage by dropping on someone’s head in order to get revenge of them killing you, or simply just because. 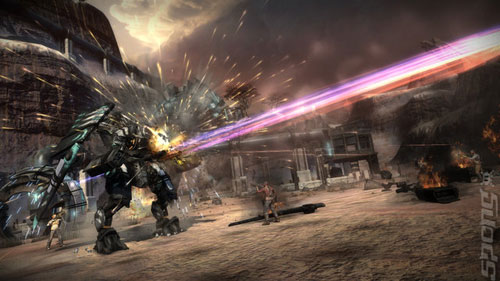 Once you have these buildings dropped, they do serve several other uses.  Everything from a barracks full of ammo, to a turret to blast incoming foes is represented in these buildings and being able to put them where you need them makes it easy to customize your battlefield.  Where would be the fun if you could just drop as many of these as you want as often as you want?  There would be none and because of that they have implemented a system where you build up energy that you can spend on buildings.  All you need to do to harvest said energy is to be near your home base.  The game will have 32 person multiplayer as well as a single-player campaign, which is a new addition to the series.
After all of that, at the end of the day, the game still feels very much like Warhawk, which leaves me as one happy camper about the whole situation.  At the booth, I got to play a multiplayer match and realized just how rusty at this game I really am.  While my team did win in the end, it was not by my doing.  Unless of course if they gave points for driving a full car of team members off a cliff into acid.