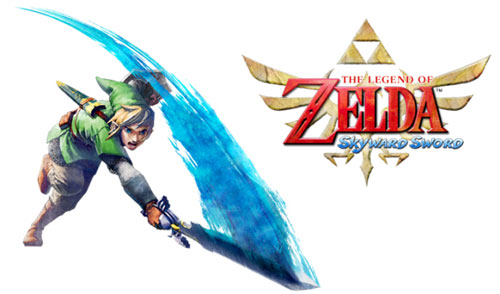 While not nearly as long as it was last year, or even comparable to the Wii U line, there was still a decent wait to get your hands on Skyward Sword.  There were three demo modes to play once you got your hands on the Wii Motion Plus enhanced controller.  There was a section where you fly on a bird, a dungeon portion and they capped it all off with a boss fight.

Bird flying has definitely been done before in the Zelda series, though it has mainly been a hands-off experience where you just get transported from place to place.  In Twilight Princess you got the opportunity to more closely control a bird as it flew through a cave.  This experience felt fairly similar to that one, but the controls were a bit more refined thanks to enhancements by the Wii Motion Plus.  It actually feels a lot more like the Manta Ray Surfing found in the Mario Galaxy series.  You hold the remote towards the screen and turn it like a key to steer and tilt it up or down to ascend or descend.  It felt a bit sensitive to me, but because of the Plus, it felt a lot smoother.

The best thing about the bird flying demo was the part before you played, because it had some story in it to give the world a bit more context.  There are four bird riders, Link included, and they are to leap off of the Skyloft and call their birds to catch them.  They were then tasked with taking a stone statue being carried around by another bird.  A gift from “the lovely Zelda” was the prize of the contest.  I really appreciated this demo mainly to see that there is clearly a deep and interesting tale in the works in addition to a fun game. 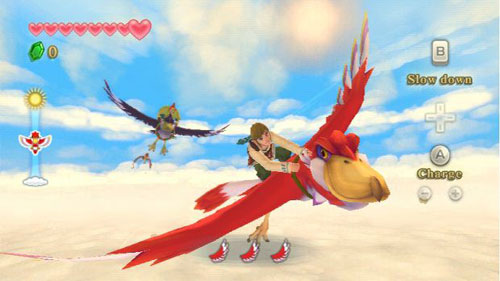 The dungeon portion of the demo was very similar to the one they had playable last year.  It had Link walking through a large grassy temple with plenty of puzzles set up specifically for the gadgets that are new to this game.  The one I used most often was the flying bug item which is used to hit switches and get items from long distances and in high places.  Rolling bombs like bowling balls and making statues dizzy with your sword also made some more appearances.

Last year, I will admit that I had a decently tough time with the enemies in the demo.  By this, I mean that I got my ass kicked by a plant and felt like a pretty crappy Zelda fan.  I could tell from this updated demo, that they’ve done a lot of rebalancing and I had a much easier time taking the enemies down.  It was still a little tough to get used to not just waggling the Wiimote, but this new control scheme will make this new game a whole lot of fun.  Just don’t expect to be able to play it in a recliner while half asleep.

The last part of the demo was a boss fight with a character that I could only describe as creepy.  For one of the first times in the history of the series, this boss is actually humanoid and attacks you with a sword of his own.  His name is Ghirahim and he is a demon with a tendency to stick out his tongue like a crazed lizard.  The fight is pretty fun and as for the first part of it, he is clearly toying with you.  If you don’t swing your sword just right, he’ll catch your blade and you have to shake yourself free.  After getting in a couple of lucky shots, he’ll freak you out with his tongue one more time and then draw his blade.  The rest of the fight is mainly timing-based where he will charge you and you have to swing at just the right time.  As well, he’ll shoot these little diamonds at you and you can deflect them back at him for damage. 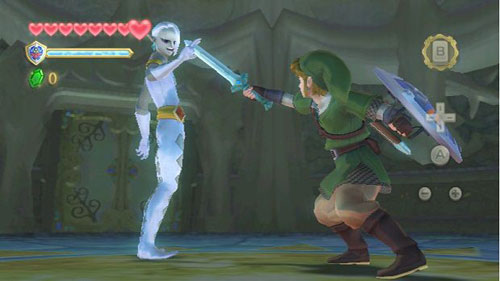 Another thing that makes this boss fight incredibly unique, is after you’ve taken him down a peg, he gets to walk away.  He’ll surely be back later in the game, but this is one boss fight that doesn’t end in the demise of the enemy.

All in all, The Legend of Zelda: Skyward Sword looks to be in great shape.  Not only have they tightened up the controls from the last time the game was seen, but it has been fleshed out in many more ways.  I am personally very excited to see this game come to the Wii later this year.  Hopefully by then, I won’t get killed by the plant that can open it’s mouth vertically or horizontally.  Either that or I’ll figure out how to swing in those directions.