After the craziness of what was the announcement of Nintendo’s new WiiU console, there was only one place I could head after the press event.  As I would have had to use a chainsaw to get anywhere near the WiiU, I decided to head in a familiar-looking loft area where the newest 3DS titles were being showcased.  With limited time, I was only able to get to two and if you are at all interested in high-quality 3D portable software then I suggest you read on. 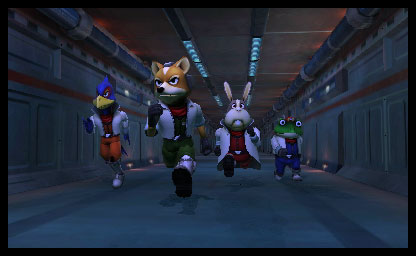 At last year’s event, Nintendo announced that they would be bringing two of my personal favorite games from the Nintendo 64 to the 3DS.  One of these games was Star Fox 64.  This year, they revealed yet another thing about Star Fox 64 3D.  There will be multiplayer and I can tell you that it is amazingly fun.

Much like the multiplayer in the original game, it puts you in an arena style match against three other foes.  The stage is littered with upgrades to your lasers, bombs, healing rings and repair modules for your wings.  All of the all range mode controls still work exactly as you remember them and feel great to execute with the analog stick. 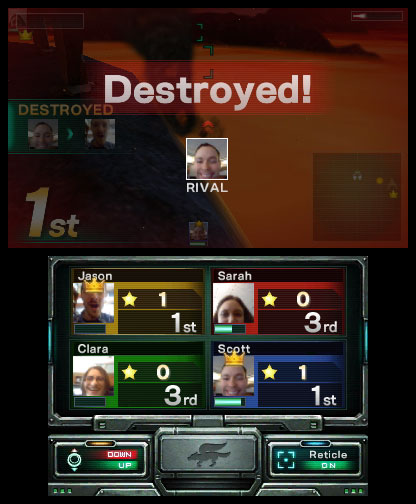 With all of these old features returning, there must be something new to spice it up, right?  Absolutely, because over every player’s arwing is a nice picture of their face as they play.  While it’s not a 30 frames per second video of your face, you can still get a good idea of what reaction people are having to what’s going on in the match.  I love this feature because it makes the matches a whole lot more personal.  It’s also a ton of fun to see your face pop up as the winner at the end of a round.  In addition to the face, there is a handy health bar located just below your enemies so that you can tell when they are about to go down.

It seems as though Nintendo has been bouncing back and forth between two styles Super Mario game styles for the past several years.  There are the games like New Super Mario Bros and the ones resembling Super Mario Galaxy.  While both of these styles are fantastic, it’s been a bit dizzying going back and forth.  With the tentatively titled Super Mario for the 3DS, they have definitely found the perfect medium between the two.

The game controls much like the Mario Galaxy style where Mario is free move about in all 3 dimensions, but the structure of the game is still very reminiscent of New Super Mario Bros.  You have a limited time to get from one end of the level to the other, there are a set number of special coins to collect and at the end you jump onto a flag pole.  The 3D is also spectacularly done as it was not overdone, but it still added something. 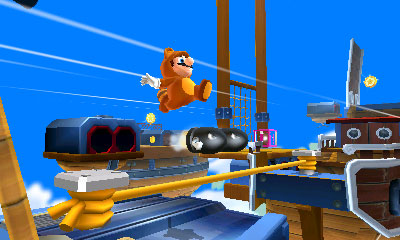 Fans, like myself, of the Koopa Kids will be glad to hear that they, along with their airships, are making a return.  Another long-awaited return from this game is the Tanooki Suit.  It is back in full force and it looks as though it won’t be nearly as hard to acquire as it was in Super Mario Bros 3.  With the suit, you have the ability to whack things with your tail and flutter glide from jumps.  There were also some amusing new touches including several decoy goombas in the levels and panels that fold out and then back, giving you a limited amount of time to traverse them.

All in all, both of these games look like they will only get better and better as their development continues.  I personally can’t wait to play the full versions of each of these when they release.  Keep your eyes peeled for more from us here at E3 2011!