There are many tabletop games I'd love to see playable in electronic form. The main problem ends up being that many of them are either too complex or take too long to play to be properly replicated on something like an iPhone. Enter one of my favorite games to bring to a game night: Coup. The rules are fairly simple and games only take about 10 minutes to complete. This makes it perfect for the leap onto a mobile platform. Luckily, the folks over at Banana and Co. agree with me on this point and have made a lovely version of the game for iPhone. 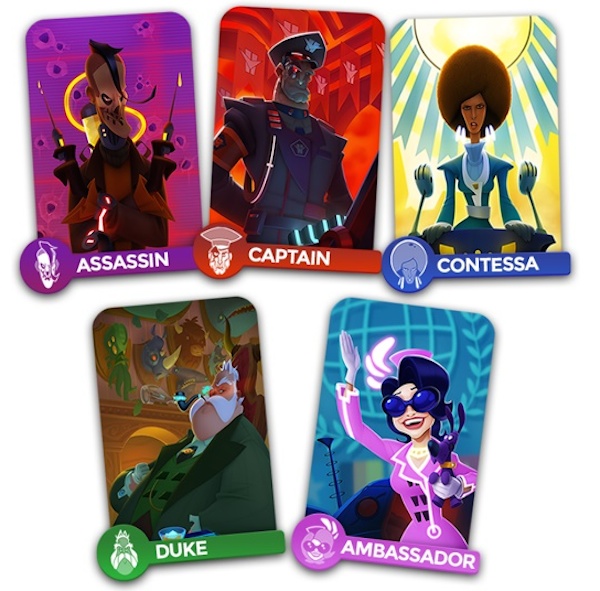 A fairly simple tabletop game, Coup is a bluffing game where each player is dealt two random cards that have a particular role associated with them. Each role either has or can block a special action, mostly involved with acquiring coins, in the game. All players can perform any action, but if you're caught doing something without the proper role, you must give up on of your cards. You can perform an unblockable "coup" for the price of 7 coins, but be careful, because having that much dough often makes you a likely target for other players.

I love playing this game in person, it's a ton of fun to bluff. My favorite part is when the other players start doing the math on how many roles you've claimed and realize that somewhere down the line you've bluffed about something. Some of that is lost here, specifically seeing the in-person reactions to a bluff, but I've found that making that the act of bluffing is still quite thrilling. Other players are able to send pre-built messages as well, so you can sometimes still get a reaction if it was a shocking enough bluff. 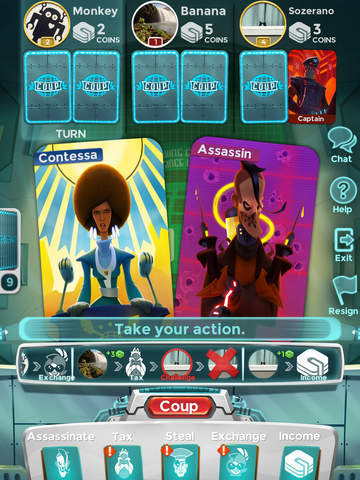 The area where this version of the game shines is in the badges you can earn. There are several ranks you can make your way through, up to 10 so far as I can tell, and each has it's own collection of badges. These badges are earned by performing certain tasks while at that rank. They can be as simple as winning a few games or as difficult as successfully challenging a bluff 5 times. When you earn a badge, you can choose one of them to be displayed by your profile picture while you play.

Playing online with real people is essential in a game where one must lie. This game has no single-player mode, aside from the short tutorial, and that was the right call. In a world of dropped connections and underground metro systems, people just dropping out is a valid concern as well. Smartly, this game kicks you out of a match if you fail to make a move for two minutes. I've had one issue where I simply wasn't able to make a move in time, but largely I've appreciated this rule. Whether a rage quit or a lost connection, if you're still in the game, you'll win if the other players time out. It's still more fun when everyone plays, but no internet-connected game is perfect.