REVIEW | "Swords and Soldiers" sequel delivers plenty of pillaging for all

The Wii U was made for real-time strategy games, but for the most part the genre hasn't seen much life on the console. Fortunately that all starts to change, thanks to Ronimo Games' Swords and Soldiers II, the sequel to their well-received 2009 title. Does it tear through the genre like a drunken warrior at Oktoberfest, or is it more of a sheepish affair?

Gone are the Aztecs and the Imperial Chinese armies, and instead we are focused on the best part of the first game: the Vikings. The story, told with pure Scottish personality by Brokenbeard, has our rapscallions on the search for a magic lamp. Redbeard and his drunken brethren traverse all through Europe as his nemesis Blackbeard (whose namesake appears to be snowier than in the past). With the world and — most important of all — kebabs on the line Redbeard must gain new allies and soldiers for his most important quest of all. 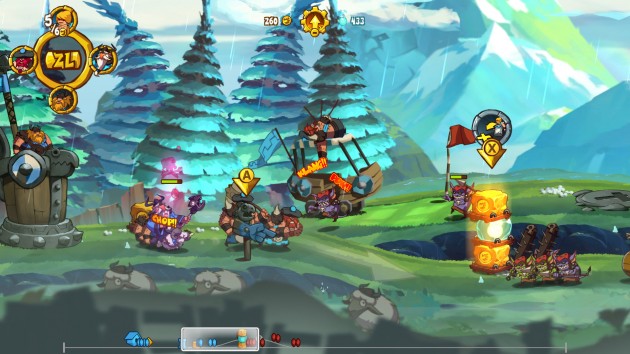 As you travel from place-to-place your arsenal becomes larger, with foes becoming allies and power-ups all the more useful. Using the Gamepad touchscreen you can summon fellow Vikings to lay waste to demons, zap enemies into sheep, build towers and cannons, and call upon the mightiest (and drunkest) of warriors to clear your path towards victory. Of course all this costs gold and magic, which can be mined throughout each of the levels via the Vikings big beauties (and, in some cases, demon allies). You can also use regular controls, but it doesn't feel as satisfying to use.

Control-wise Swords and Soldiers II works right on cue, with no sign of lag to be found. However when there's a lot going on and you need to help a Viking in trouble you will have to be precise on where you touch. Many times a healing potion went to the wrong person, causing my stronger ally to bite the dust. It's a shame that a zoom option is not given, as it would've made it easier to pick and choose whichever Viking will be bestowed a power-up. 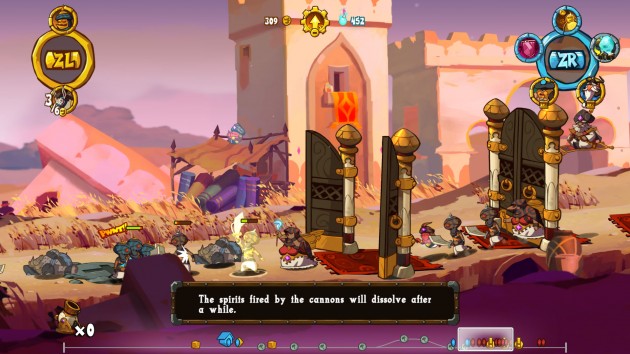 Using the touchscreen rather than the regular controls leads to one other disadvantage. As much as it is great playing a real-time strategy on the Gamepad there will be more time spent looking down at the controller rather on the television. This lead to some stiffness in the neck area, something I came across similarly when playing Scribblenauts Unlimited and a few of the Nintendo Land games. Because of this I found myself playing the game in 60-minute intervals with a 5-10 minute break in-between, which took me out of the heat of battle on many occasions.

No longer do the Vikings look cutesy, as their appearances have been changed to that of big, burly, nasty bastards who look like they'd punch their grandma if it meant a free drink. Its cartoonish look, which Ronimo Games perfected with their fun Awesomenauts games, will have you fighting the urge to play the game in you favorite superhero jammies and eating a bowl of sugary cereal. (We wouldn't blame you if you did, though.) The incoherent dialogue from the characters will get a good chuckle out off you, but it's the narration from Brokenbeard (portrayed in the game by Nicholas Maddern) that will have you laughing hard and hearty. 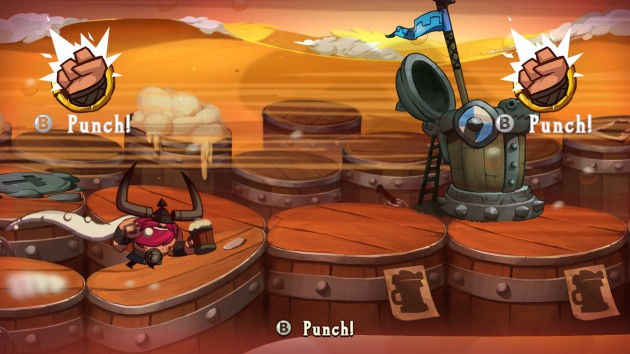 Once you complete the five-hour campaign you and a friend can go head-to-head in a Skirmish as either Vikings, Persians, or Demons with the weaponry you've earned throughout the game. These battles can last you 10-15 minutes each, depending on how well-trained you are in the art of war. The only downside to Skirmish is it's only in-room two-player, as no online mode has yet to be announced for a future patch. Still, if you have a worthy friend close by then there will be plenty of barbecued violence for both of you to enjoy.

Swords and Soldiers II is a wonderfully fun real-time strategy game that uses the Wii U Gamepad to its fullest potential. While you'll be looking downwards more at the controller screen than on the TV, you'll still be witnessing some pretty entertaining battles unfold. Pour yourself a foamy pint, and prepare to gleefully destroy all that stand in your path in Ronimo Games' latest adventure.

Banana and Co. Performs a Mobile &...