With the recent film, Mad Max: Fury Road, being such a hit, the car-filled desert apocalypse has been very much in vogue of late. The Rogue-like genre has also seen quite a bit of a boom recently. If both of these things appeal to you, then Sunshine Games has some very good news for you in the form of their new game: Skyshine’s Bedlam.

In recent game design, most games wear a variety of hats and defy a simple explanation of what to expect. For instance, if I were to break down everything I saw out of Bedlam, I would call it a rogue-like turn-based strategy RPG. The game is also built using the same engine as the immensely popular The Banner Saga, so you can expect an amount of traveling, resource management and random encounter events sprinkled in there.

Bedlam puts you in charge of your very own giant tank called a Dozer. This machine, which you’re able to choose at the start of each game, takes three kinds of materials to run: crude, meat and power. Your goal is to traverse the vast wasteland known as Bedlam to deliver passengers from the city of Bysantine to the Aztec City. On your way down, you’ll encounter all kinds of hazards and have to make some tough decisions that could easily get you killed in an instant. If you manage to make it all the way down to the Aztec City, the game then allows you to attempt a trip back up through all the mess you caused on the way down. This acts as the sort of New Game + mode for the game and is distinctly more difficult. 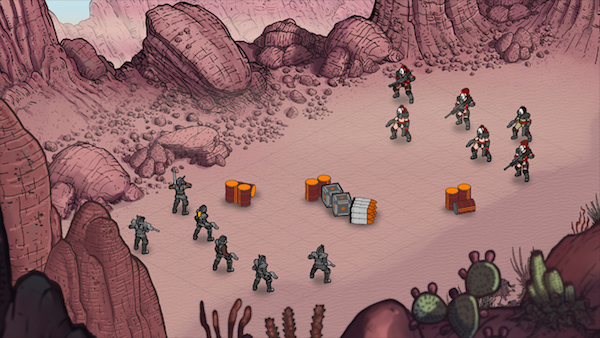 When you encounter one of the enemy factions, like Marauders or Mutants, you engage them in battle outside of your dozer. The battle system is very similar to that of The Banner Saga, where you’re moving characters along a grid and attacking adjacent or ranged enemies. The differences include each team having a set amount of actions, as opposed to specific characters and special abilities you can activate like healing, teleportation and shields. Your dozer can even jump in the action with huge special attacks like a nuke I happened to find in an abandoned silo while I was exploring. If one of your crew members happens to bite the dust in one of the fights, they’re gone for good, so make sure to keep everyone alive. If a team member manages to get in some kills, you can upgrade them to a Veteran to boost their skills.

The game has a great hand-drawn look to it that definitely compliments the setting. In the battles, the animations were delightfully violent as I took down the marauders I was fighting. Enemies melting and exploding into gore as I mow them down for trying to steal my supplies both looked good and felt pretty satisfying. The look and feel of the game evokes the desert apocalypse vibe while still adding it’s own touch with the Cyborg and A.I. enemy types. 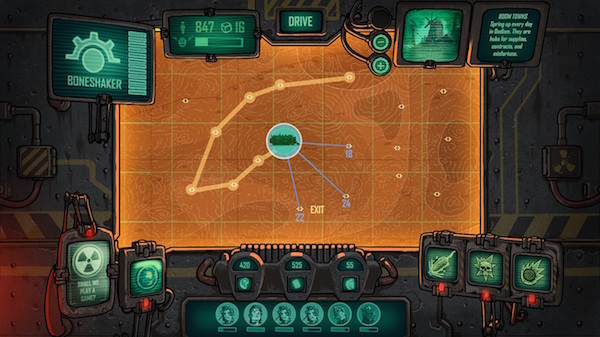 Bedlam felt very much like I was playing a combination of FTL and The Banner Saga. As you travel down the map, it behooves you to move on when you can, but gathering resources is also important. If you run out of a resource at any point, you engage with a roulette moment where a half-loaded revolver will appear on screen and clicking it allows you a fifty-fifty chance of either being saved or dying horribly by a random event. When I ran out of crude, it seemed for a second I was saved, right up until I was betrayed and my entire crew puked their organs out. Not very pretty, but a good motivator to make sure you keep those resources up.

Having not seen much of Skyshine’s Bedlam before I checked it out at E3, I was surprised to very much enjoy the time I spent with it on the floor. I’m certainly excited to jump back in with the full version when it comes out this fall on PC and get those passengers to the Aztec City with their organs intact.

A True “Legacy” Revealed For Mega...