HomeComicsSuperman v the IRS and the SSA
Comics

Superman v the IRS and the SSA

In the long view of things, super heroes are supposed to exist in our own world. They are supposed to be affected by the same things that we are affected with. Most of them have secret, normal identities, so those people must act like their circumstances affect them as they do the rest of us.

But superheroes are not impervious to the law and that brings to mind some of the intricacies they might face. Think of the lowly Social Security number. I have one and I'm sure, if you're American, you have one.

So I started doing some research into the subject. Answering the question, does Clark Kent have a Social Security number, is easy. That was answered way back in 1966 in Action Comics -- his Social Security number is 092-09-6616. Turns out that it was the same number used by a man named Giobatta Baiocchi, who died the year before.

This research also revealed some information of more use to identity thieves: Superman's date of birth is Feb. 29. Since his age is perenielly between 29 and 35 in the comics, you'd just have to do some subtraction. His mother's (Lara) maiden name was Lor-Van. That information might score you a credit card, if the company is stupid enough.

Unlike Clark Kent, there is no recorded Social Security number for Superman. But can one man even hold two Social Security numbers? The answer, surprisingly, is yes. It happens a lot. According to articles on sscardreplacement.com/social-security-card-replacement-day/ explaining situations that the Office of Inspector General had to deal with, "In some cases, an individual can have more than one SSN. For example, when SSA (the Social Security Administration) assigns consecutive SSNs to members of the same family, one of the individuals can request a new SSN. If SSA assigns an individual more than one SSN, the Agency generally cross-refers it electronically in its records."

But, if cross-referemced. wouldn't that reveal Superman's secret identity? That's why it is believed that they are not cross-referenced. That, too, would not be unusual. According to the pamphlet, they have identified 21,891 pairs of Social Security Numbers with identical information and found 66 of the pairs had claimed earnings on both numbers. Coincidentally, they found one pair in which one person claimed to be alive, but the other one was dead. 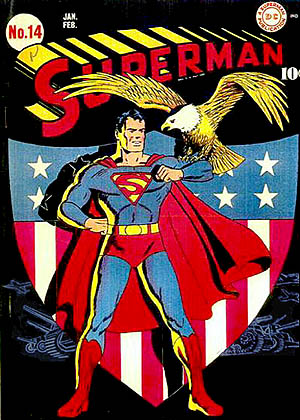 The government entity with the most interest in Social Security Number is the Internal Revenue Service. This opens a whole new can of worms for Superman/Clark Kent: tax liability. For Clark Kent, it used to be easy -- as a reporter for the Daily Planet or a newscaster for Galaxy Broadcasting, his employer took taxes from his salary and sent them to the IRS.

But Clark Kent's tax liability changed when he recently quit his job and went to work as a full-time blogger. He is now self-employed and has to follow different rules. Here's where the internet comes to the rescue. Martha L. Voelz, an associate with S.H. Jacobs & Associates LLC in New York wrote a blog post to describe Kent's liability from his day job. Click here to read it.

Of course, his superhero stuff is another matter, one that was highlighted in a story printed in Superman #148 in a story called "Superman Owes a Billion Dollars!" in which a mild-mannered IRS agent throws himself out of an office building window to attract Superman to come to his aid, only to discover that he's in trouble with the IRS.

Don't worry, the story ends well: The feds decide that since he has helped so many people, he has billions of dependents and that, if Superman were to decide to claim all those dependents, he would bankrupt the government. So they decide to let it slide.

Life should be so good for all the Good Samaritans of the world.