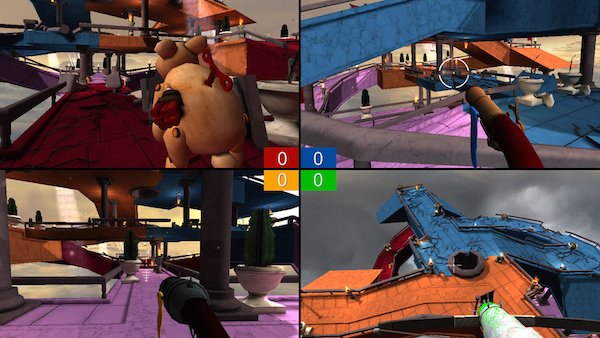 Growing up, I never had a powerful PC, so the majority of my multiplayer gaming took place on a couch next to my friends. In those days of Mario Kart 64 and Goldeneye, a split screen meant that every player's screen was available to view. It was agreed, almost always silently, that cheating by glancing at your buddy's section of the TV was not okay. Today, Samurai Punk has developed Screencheat, a game where this is not only possible, but one of the only ways you can locate your opponents.

Having learned the art of not cheating in these types of games in the past, playing Screencheat was a bit of an adjustment at first. To be a bit more specific, Screencheat is a multiplayer first-person shooter where all of the players are invisible and it only takes one shot to take someone down. The only way to know where to shoot is by parsing their location from their perspective. It takes quite a bit of multitasking skill to be able to focus on both your movements and those of your enemies, but after a certain amount of time, it becomes mentally draining to keep track of everything. What surprised me even more than that however, was that it actually did get easier after a bit of practice. 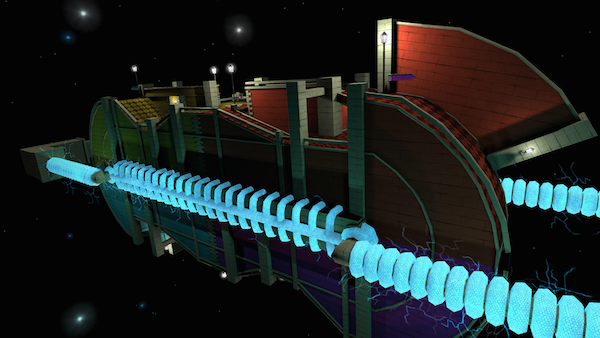 Wackiness is the predominant theme pulsing through this shooter. The weapons range from a standard blunderbuss to a hobbyhorse and every kill is paired with a groan-worthy internet joke. You can even have your ragdoll corpse turn into a giraffe and other completely random things once you've been shot. Screencheat takes a quantity over quality approach to its humor that ends up working in the way it was intended, but leads to quite a few groans. There are a few jokes that mode me genuinely chuckle, but the majority ended up just making me laugh out of confusion and absurdity. You've been Kanye West-ed! See what I mean?

Some of the weapons are really fun and others are just sort of baffling. The blunderbuss is your standard weapon and has a wide enough spread to compensate for your inability to see your target. I also greatly enjoyed the hobbyhorse, which allows you to do a sprinting attack and kill anything in your path. Each weapon tends to lend itself better to certain modes, save for the all-around usefulness of the blunderbuss. There is a teddy bear bomb that ends up being really useful for the hillcampers and bombs away modes when you know where some players will be camping out. The candelabra, melee weapon of the game, also works out well in these modes for the same reason. Other weapons like the Sorgean, which is a giant spiky balloon, and the Chefolet, it fires an energy ball, never ended up clicking with me and so I rarely switched to them. 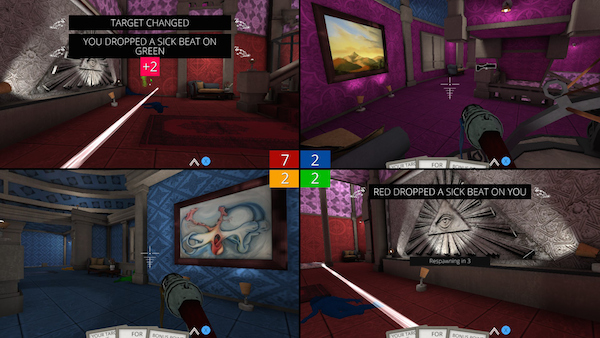 You might start noticing a pattern here when I say that there are a decent number of game modes and they are a mixed bag. There are some very standard FPS modes thrown in here and some surprisingly creative types as well. What I wasn't expecting when playing split-screen with a group of friends was that opinions were quite divisive on which modes were good and bad. One of my favorite things about the general flow of Screencheat is that matches tend to go quickly and you're already in the next one before you've even had a chance to consider quitting.

Bombs Away, a mode where you're placing and defusing bombs, broke up this pace by having players whose bases have been blown up sit out the game until there's one base standing. Despite my distaste for this fact, it turned out to be one of the favorite modes of my friends during our play session. Murder Mystery is a game type where you're tasked with taking out a particular player with bonus points awarded for using the correct weapon. These factors are represented by cards you can glance at on your screen and immediately evoked a much more violent game of the board game Clue. 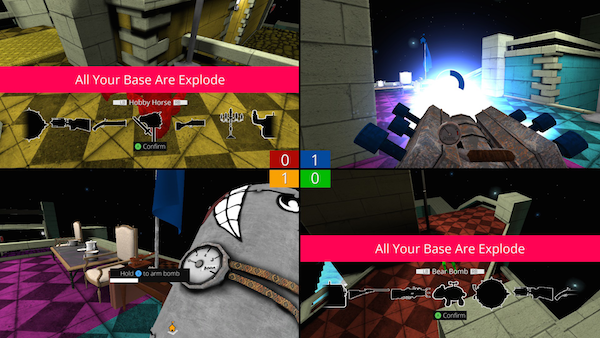 While joining in on a random lobby was easy and quick, the correct way to play this game, and there's a trophy to prove this statement, is sitting next to a group of friends on a couch. Screencheat is nothing if not customizable and comes loaded with plenty of options to make sure you're playing exactly the game you'd like to play. If you don't like a mode or map, then you can filter it right off and it will never come up. There are also several mutators that do all kinds of wacky things like making your corpse fly around like a ghost when you die or drop a bomb where you've been killed. Probably the biggest disappointment was when I unlocked a mutator called Wilhelm which, as you've likely guessed, is supposed to play the fabled Wilhelm scream whenever someone dies. When I excitedly turned on this mutator, with the intention of never turning it off, it ended up not properly functioning. Hopefully something that will be addressed in the future.

Screencheat comes from one of those ideas so novel that it's honestly surprising no one has tried it before. Retraining your brain to use the information from the other screens is tough, but once you start to get the hang of it, the game ends up being both fun and a bit exhausting. Best played in short bursts and in a silly mood, Screencheat doesn't execute everything perfectly, but certainly provides the tools to tailor the experience to a player's particular tastes. Screencheat is available now for the PS4, Xbox One and PC platforms.