Although it is a weak season, the anime that do shine this winter are shining very brightly. In fact, there is one show that may stand as one of the all-time great anime! Don't believe me? Read on, and let me convince you. 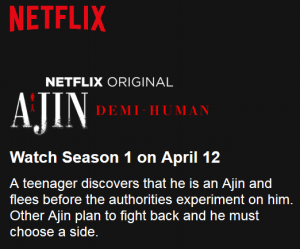 Netflix snagged Aijin as an exclusive for their streaming service, so it's only available to those who can't wait for legal streaming. The bonus for waiting so long for  Aijin is that it will be available in the original Japanese and an English dub. I know nothing more about Ajin than the trailer I have seen, but the hype is positive for it. I'll definitely talk about it if it lives up to the buzz. 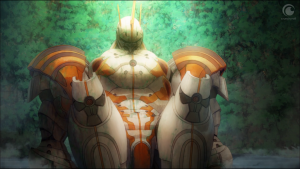 3D CG has come a long, long way. At a certain point in anime's history. anime fans wouldn't even spit in the general direction of a CG show. Now, they look very impressive. Bubuki Buranki (BBK/BRNK) is an action show that just happens to be full CG. BBK/BRNK is about a family that is separated because of the powerful mecha known as Burakni. We meet the main character as a child, and years later, he is part of a team who wield Bubuki, which are parts of a Buranki. This does not rank in the best of winter 2016 because its most impressive in action, but not compelling in other respects. 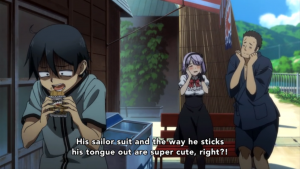 This is a weird show. Very weird. Dagashi Kashi is about a sweets shop in Japan. Kokonotsu (AKA "Coconuts") Shikada is the son of the owner, Dagashi, and his father wants him to take over the family business. Then comes Hotaru. Hotaru wants Dagashi to come work for her father, but Kokonotsu has to take over the shop. This is how the weirdness begins. Hotaru, ample chested, is also incredibly well-versed in Japanese sweets, so she goes on rants about every single item in the shop. That's it. That's what this show is. I like it only because it's so uniquely odd. 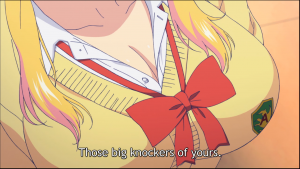 Where do I start about Galko-chan? Oh yeah, the boobs. Yeah, this show is all about the body, bit not in the way you would expect. Yes, you will see a LOT of Galko chan, but sometimes it's not all about her various curves. I guarantee you that you have not heard characters in anime talk about sex and teenage issues like this, and that's the main reason why I still watch it. Usually, girls and boys just talk about girls and boys, then they have participate in sex comedy hijinks. In Galko-chan, the girls and their classmates talk about topics that you would think are too private to use as fodder for a show aimed at young people. There is so more talk of tampons and menstruation than I have ever heard in all of anime, and I don't think that's an exaggeration. Galko is not fall on the floor hilarious, but the combination of funny and interesting (sometimes TMI) talk makes it a good watch. 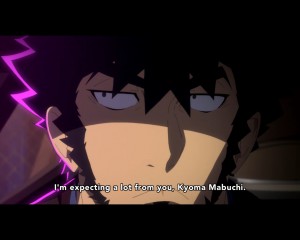 I had a very hard time with Dimension W. The premise speaks to me, and I was very excited when I watched the first trailer. Now that I've watched several episodes of it, I'm a bit let down. My disappointment mostly comes in the form of an android named Mira Yurisaki. What I wanted from Dimension W was a sci-fi detective show. This anime, however, serves many masters, so we also have a mascot character who's a sex object, AND she has robot ears and a metal tail. How cute! How unnecessary.  don't mind the idea of Kyouma, our technology-hating hero, partnering up with the last kind of being that he would want to. My problem with Dimension W is that it wants to sell some Mira figures while it tells a tale of unlimited energy being corrupted.

Grimgar of Fantasy and Ash 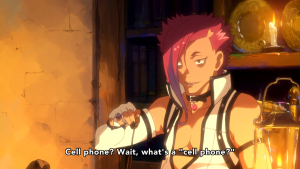 What happens when fantasy meets slice of life? Grimgar of Fantasy and Ash happens. Grimgar of Fantasy and Ash is a very sleepy anime. The pace is incredibly slow. Imagine playing a video game for 3 hours, never encountering a boss fight. Grimgar is deeply immersed in its world, and it has no worries about keeping your excited with many fights. The heroes are low-level scrubs who are trying to become better, and you are going to see them fight a lot of goblins. When they aren't fighting, everyone is living with a beautiful landscape in the background. One thing that Grimgar can boast is how beautiful each episode is. A shame that it's not terribly exciting. 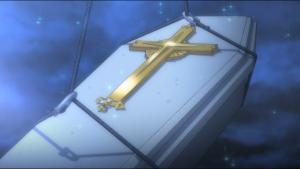 Nobleese Awakening came out of nowhere, and left as quickly as it came. Its a movie, but the run time is about a half hour, so I was looking for a lot more. Noblesse Awakening is about a vampire who has been asleep until the present day, where his incredible powers are needed again. This is based on a Line Webtoon, and I don't know if any more movies will be made, or a TV series will be made of it. The movie played more like a television show anyway, so it should continue in that format. 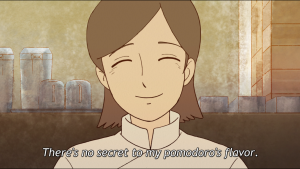 It is time to say goodbye. With most anime shorts, people tend to have low expectations for shows that have low budgets and less time to tell a cohesive narrative. In Tabimachi Live Show, each episode is its own story, and each episode is not connected to another. So you get one tale of people saying goodbye, and only 4 episodes. I've already watched all of this season's Tabimachi, and I loved every episode. Some are better than others, but they are all great little tales of people moving on. 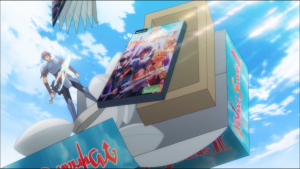 This is the comedy that Dagashi Kashi cannot be. From the first episode, the comedy was so strong that I knew I wanted to keep up with the season. I guess I love "mean" comedy, because Konosuba is about idiots, some of whom are mean. Konosuba is basically a parody of "child stuck in a fantasy world" anime and also of RPG games. There have been a few anime that make fun of or parody RPGs, but Konosuba is very successful at not only making funny jokes about RPG cliches, but it's just funny in general. There is some fanservice in the show, because there are barely any anime that escape that; but a lot of the content isn't concerned with how pretty the girls are, or long pans from their butts up to their boobs. Konosuba is a fun, ridiculous adventure. 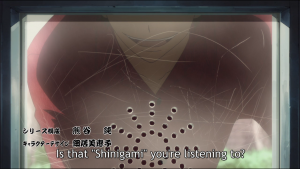 It's time to get mature! No, I don't mean in the sex, cursing, and blood sense. I mean in the "there are no shounen heroes to be found in this anime" sense. If you know anything about Japanese history, then the word Showa means something to you. This is the name for the World War II era of Japan's history. Showa Genroku Rakugo Shinju is about Rakugo, Japan's one-man dramatic performance. The story begins in modern times, with a young person interested in learning Rakugo, then goes back into the Showa era to tell the story of the old Rakugo master's formative years. Very mature. This is a history lesson, and I think that there are many worse ways to learn about Japanese culture than a well produced, well written anime. 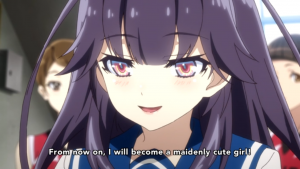 Why am I watching a show about a school band? That's just it: Haruta and Chika is not really about a high school band. It is actually a show about solving mysteries. That is probably the only way I would be interested in watching a music anime. Haruta and Chika is so charming. Haruta and Chika are a boy and girl who have a very unique interest in their band instructor. For whatever reason, they get sucked up into the affairs of other students at the school, and sometimes they go outside the school. Haruta is a bit of a genius, and Chika is, well, she's naturally gifted. The band do play music, and very well at that, but you're not going to hear much being played. Also, if you're wondering, yes, the opening theme is one befitting of a music show. 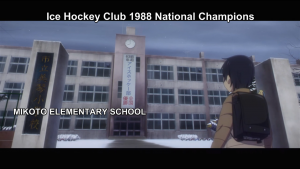 Say hell to, hand's down the best anime of the winter season. Erased (Boku dake ga Inai Machi [The Town Without Me ]) pulls you into the life of a 29 year old pizza delivery boy who had dreams of becoming a manga artist. Even though his dreams are dashed, he does have an amazing gift: revival. Revival is his ability to go back in time and correct events that have gone wrong. It's a blessing and a curse, because he doesn't seem to have total control on revival, and there is a murderer still at large from decades back. Will our protagonist, Satoru, be able to solve the mysteries around him, and have a happy ending? I don't know, but I have a feeling that the show cannot end without some tragedy. On every level, Erased performs well. It's a sci-fi thriller that's well acted and animated. There is little else that you have to watch this season.

Spring is almost here! You can catch up on some of these shows, at least, because they are less than 24 episodes. I hope you can at least catch up on Erased. See you next season. 😉