HomeComicsThese are the final days... of Superman
Comics / DC

These are the final days... of Superman

We aren’t in the loop as far as the future is concerned. We just know that the multipart series being continued through Action Comics #51 os called “The Final Days of Superman,” so we’ll just have to leave it at that.

For those of you just getting in on the story, the devastating effects of Apokolips’ fire pits in Justice League: Darkseid War, the A.R.G.U.S. Kryptonite chamber from “Savage Dawn” in Superman, and his battle with the would-be god Rao in Justice League Of America all combine in a perfect storm of death for the Man of Steel. Determined to protect humanity, despite his impending death, Superman embarks on a quest to seek heroes from across the DC Universe to continue his role as humanity’s protector. 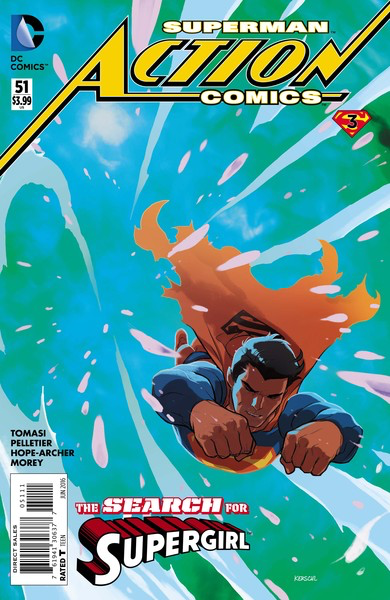 The story in Action Comics #51 is called “Dazed and Confused,” where with the help of Batman, Superman finds Supergirl at a D.E.O. facility, only to find out that she had been working with them to regain her abilities, as her powers had been leeched by the actions of Vandal Savage. Superman reveals to Kara the responsibility she must take on when he is gone, and gives her the key to the Fortress of Solitude. Meanwhile, the new “Clark Kent” made a deadly appearance at the Daily Planet and Dr. Omen receives a gift for her experiments—the Man of Steel’s blood

Part 4 continues with Superman/Wonder Woman #28, in a story called “Last Kiss,” which will be available April 27. Wonder Woman confronts Superman about the news that he is dying, and with no barriers left, they confess what they could never say before. But all too soon they are called to aid in the dilemma that is the new and unstable “Superman”. But who is this newcomer? And what part does Ulysses play in this?

“The Final Days of Superman” series sets the stage for the DC Universe: Rebirth launch beginning on May 25, which will result in new identities, new costumes and, perhaps, even more Supermen.