As a video game journalist site, it's hard to not get hyped up about going to - and covering - E3 2016 in Los Angeles any year you're invited. The E3 Expo is one of the biggest expos in the US where a massive chunk of new game news is released for our consumption, and this year marks our 10th straight attendance.

At ESH we love video games. We love the stories they tell, the deep, rich, and sometimes weird worlds they transport us to. We get excited about creativity and innovation. We're huge fans of the designers, and layout artists that create the works we love.

We're unapologetically fans, and yeah, we're on the hype train. But we promise to share nothing but our 100%, absolute honest opinions about everything we see, hear, and go hands-on with during this show - and every other show we cover. That's our promise to you, our community. So check out our coverages, share, comment, and like them on social, and let's enjoy this week together.

While the entirety of the ESH team will not be in L.A. for the whole week to cover E3 2016, we will all be sharing our honest reactions and thoughts to all the news that comes out of the show all week long here on our site and on Twitter and Facebook. Our coverage starts on 6/12 when will be be live-tweeting our coverage of both EA's and Bethesda's media briefings. We'll have chatrooms on our site for these events as well as Microsoft's, Ubisoft's, and Sony's media briefings on Monday 6/13 so be sure to join us in chat or on twitter using the hashtags below.

So get your eyeballs and ear-holes ready for a bunch of hands-on reviews, previews, videos, photos and more from E3 2016. All aboard the hype train. 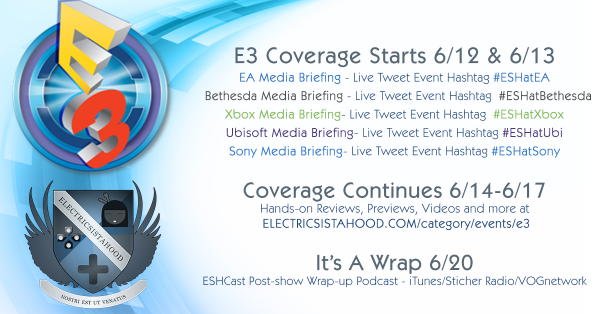 Call of Duty XP, championship even...