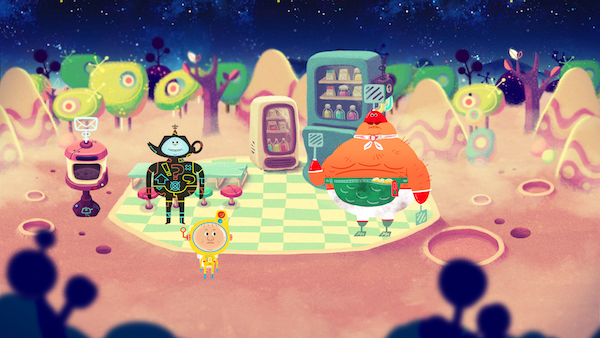 Roguelike games had a big boom after the success of titles like Rogue Legacy and Spelunky, which led to quite a few duds. I was almost ready to give up on seeing another fresh spin on the concept, until I stepped up to play Loot Rascals this year at E3. Offering a fun and addicting take on procedurally-generated areas and turn-based combat, this was probably one of the best indie titles I played at the show. It had a colorful, vibrant and silly art-style and I just couldn't help but finish the entire demo.

After crash-landing on a hostile alien planet you are tasked with escaping alive. This is the very simple setup for Loot Rascals, but the real meat comes once you start playing. The entire game is turn-based and runs on a day and night cycle. Normally a glossed over feature, the time of the day actually plays a huge part in your strategy with Loot Rascals. Each enemy has an advantage over our hero either in the daylight or the dark of night. Their advantage is displayed over the head of each enemy. If you attack at the proper time, you will get the first strike, which can be very important, because you don't come equipped with a ton of health. 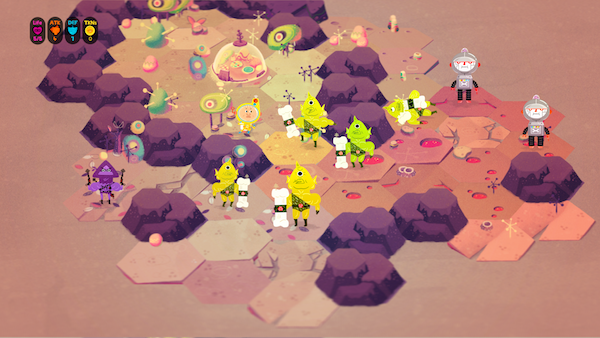 One of the most intriguing things about Loot Rascals is the turn-based system built into the game. The world is made out of several tiles and you can move freely through the world. Every time you move from one tile to another, that counts as another turn. This makes the strategy part of the game that much more interesting. Sometimes you might need to run away from an enemy, carefully planning out when to strike, based on what time of day they are weakest. Giving you the ability to move freely within the tiles keeps the game flowing and makes it more dynamic than most turn-based games. The combat is also turn-based, with each attack representing a spent turn. The battles happen automatically as the combatants meet, but be careful the area isn't too crowded, because more can jump in after you've finished a fight.

Each victory can get you some new cards which you can equip to our space-traveling hero to better their chances for survival. These might be simple things like a ray gun to boost your attack or some underpants to up your defense. The customization of your deck doesn't end there however, as the organization of the cards can be just as important as which ones you've kept. Some cards offer a special boost to either themselves or other cards around them when placed a specific way on the two rows in your inventory. There are also special ability effects that can be placed on top of existing cards that give you the ability to do things like burn and freeze enemies. You can even teleport or heal yourself, which becomes necessary as the worlds grow even more difficult to navigate. 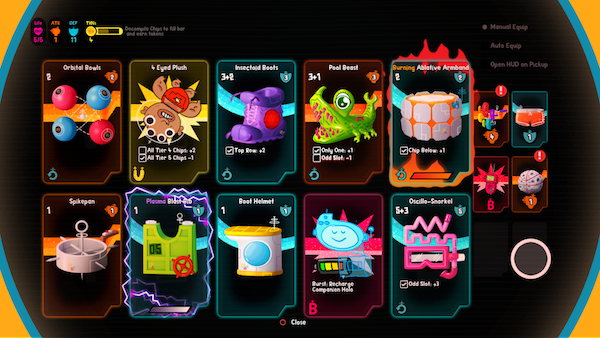 Growing more dependent on my special abilities as I went along, I suddenly found there were even some special tiles in the game. The most vexing came from one that strips you of your special abilities while you're standing on it. If you're not careful, it's fairly easy to get backed into a corner and then you don't have your powers to bail you out. There were also icy tiles that you slide all of the way across until you reach one that's not slick. I both had this kind of tile accidentally slide me into an enemy and used them for a daring escape.

Sporting one of the more vibrant color-palettes and some cute-looking animation, this is one game that would be hard to overlook. If you're a fan of roguelike games and have been looking for the next one that will suck away all your free time, look no further than Loot Rascals. Make sure to check it out when Hollow Ponds releases this game in 2017 for PS4 and PC. 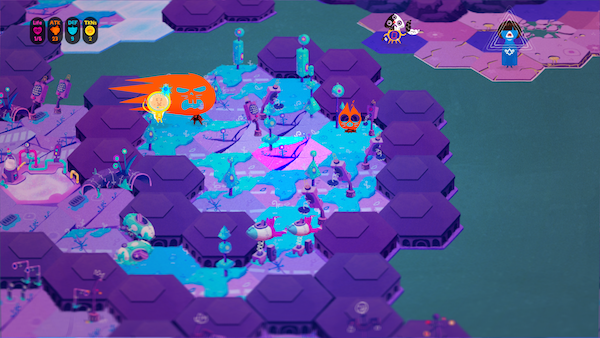