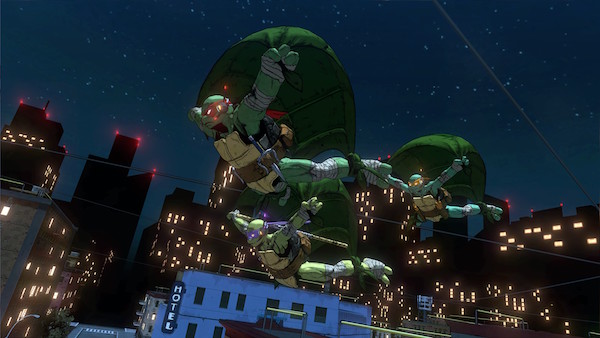 GAME REVIEW | 'Mutants in Manhattan' Is a Few Slices Short

Saturday morning cartoons were always such a huge production when I was younger. If you wanted to see your favorite show, you had to wake up early and make sure your butt was planted in front of that TV in time to see them. One show that was always worth wiping the crust out of my eyes early on a Saturday morning was Teenage Mutant Ninja Turtles. As such, when I heard that PlatinumGames, who recently released a pretty decent Transformers game, was making a game based on one of my favorite childhood cartoons, I was excited. The question I was faced with after playing Teenage Mutant Ninja Turtles: Mutants in Manhattan ended up being whether nostalgia is enough to make an otherwise troubled game enjoyable.

I'm not ashamed to admit that I was a super-fan, I may have owned underpants with the turtles on them, but somewhere along the way my fandom dropped off. There have been many attempts to revitalize the series by Nickelodeon, the current rights-holder, but it seems like the most successful attempt has been via the IDW comics series. I haven't read any of it personally, though I have been hearing decent things through the grapevine. Technically, the game doesn't adhere to any particular continuity, though it does include a slew of familiar characters. 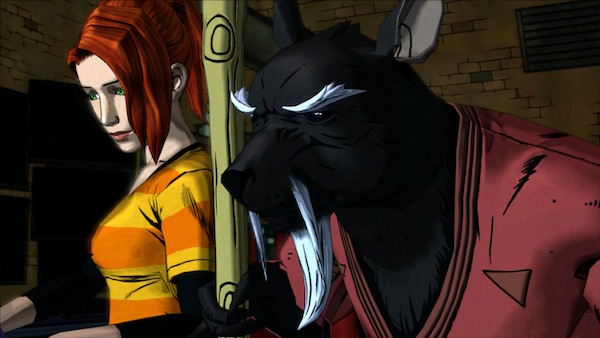 Having played Transformers: Devastation last year, it was easy to jump into the brawling action of Teenage Mutant Ninja Turtles: Mutants in Manhattan. The main game tasks you with performing tasks in each of its areas leading up to a boss battle with the villain you've chosen to fight in that particular stage. The missions given are randomized and you have to complete a certain amount of them successfully before you're allowed to access the boss. If you happen to fail a particular task, no trouble, it just hands you another one and the cycle continues.

The missions are more varied than I was expecting, but the quality varied quite a bit. Sometimes, you just needed to beat up all the baddies, but other missions shook up the formula in some interesting ways. Disarming bombs, returning money bags and blowing up trucks were among the other tasks the game asked of you. Everything involved at least a little bit of ninjutsu action, but I was pleasantly surprised that they actually tried to work in some variety there. 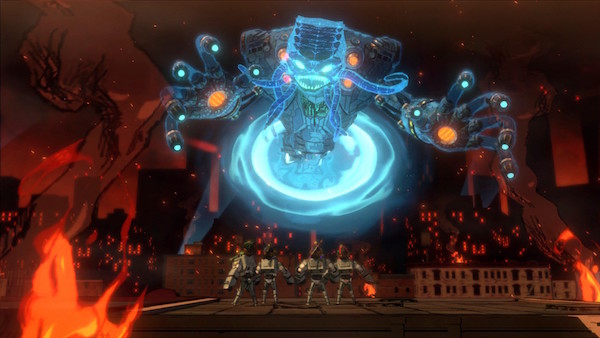 In stark contrast to the gameplay from Transformers: Devastation, Teenage Mutant Ninja Turtles: Mutants in Manhattan is messy and hectic. No matter what, all four turtles are present, which can be confusing on-screen at times. Don't get me wrong, I know my Donatello from my Michelangelo any day, but when you throw a gaggle of foot soldiers into the mix it gets hard to see who I'm aiming for and who's punching my way. Mutants in Manhattan is clearly designed with online 4-player action in mind, but it would have been nice to include a one turtle single-player option. The game includes measures for blocking and dodging, but with the regular enemies, they just didn't seem worth it. The bosses are another story altogether, but I'll get there in a bit.

The game also included ninjutsu super moves that could be activated repeatedly on a cool-down and this is where the main customization lies in the game. After every level, the game tallies up some points earned and you can spend them to upgrade your ninjutsu abilities. You even get a new option from every boss and most of them are pretty cool. In an effort to avoid over-leveling, you also have a player level which must be reached to unlock the ability to upgrade your skills. Sound grindy? Well, it didn't affect my normal-mode playthrough, but once you try out the harder difficulties, it certainly feels that way. Honestly, this part of the game feels like they had micro-transactions in mind, but just never implemented them. 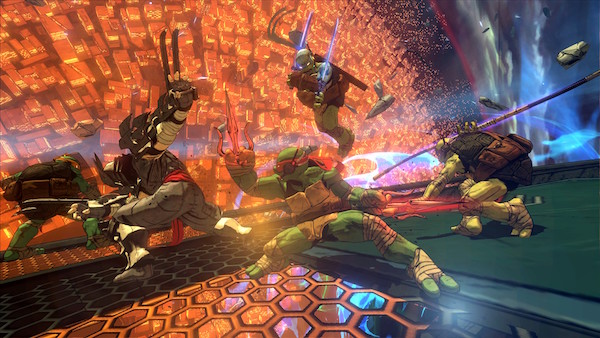 As much as I would like to do so, I'm not going to sugar-coat this: The boss battles in this game are a bummer. Sporting a total of seven health bars in normal difficulty, going up to nine on hard, these bosses are a true war of attrition. The game constantly reminds you to switch between all of your hero turtles and use their ninjutsu powers since your normal attacks feel like they do almost no damage at all. This ends up being a game of tag where you pop all of your specials and then just try to get in some hits while they recharge. I could understand if they were skill-based battles where dodge and parry finally become important, but the action is still too hectic with all four turtles on-screen to make that a viable strategy. In the end, I figured out that spamming my ranged shuriken attack and just staying back while my ninjutsu recharged was the easiest strategy since, especially when they turn red for their final 2 health bars, it's easy to get killed going in close. This made many of those fights just downright boring, which is a shame considering the context.

That being said, as far as aesthetics go, I rather enjoyed the look of Mutants in Manhattan. Implementing some nice cell-shading, it was like no other version of the turtles I've seen before and I enjoyed seeing them in a new light. The voice cast, including the likes of the talented Ashly Burch and Nolan North, did a good job of doing justice to the classic characters. Having taken an extended break from any TMNT material, it was a ton of fun to dive back in and see all of my favorite turtles and villains back in action again. 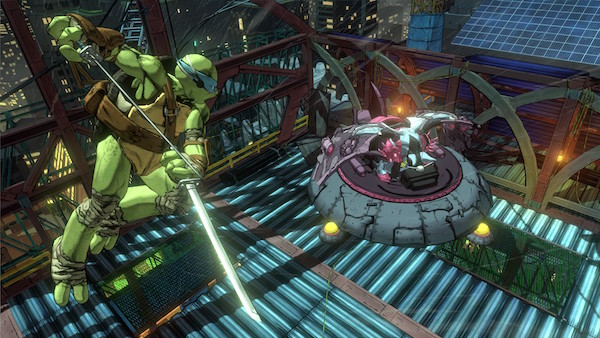 Letting go of your past experiences with a series and looking at a new entry in a void is difficult, especially with something as formative as Teenage Mutant Ninja Turtles was for me personally. That being said, nostalgia does still count for something when considering your enjoyment of anything. Heck, I've gone to see every single one of those Resident Evil movies and will likely go see the last one as well. I played Teenage Mutant Ninja Turtles: Mutants in Manhattan to its conclusion and did have an amount of fun. It is certainly a flawed title, but if you are a fan of the series, there is an amount of enjoyment to be found here. Teenage Mutant Ninja Turtles: Mutants in Manhattan is available now for the PS4, PS3, Xbox One, Xbox 360 and PC.