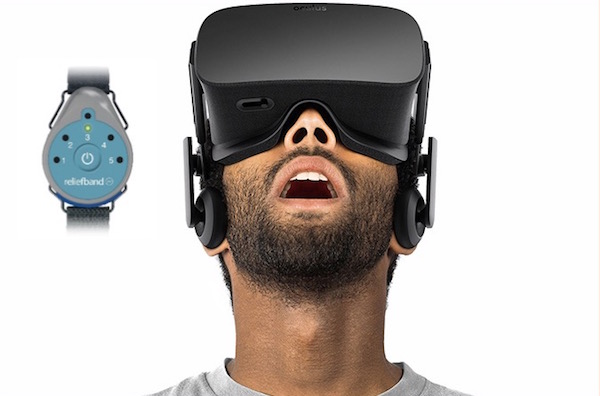 Motion sickness is one of the few things that still worries me about VR taking off in a big way. Every person is different, and while I don't get particularly motion sick, there are plenty of people close to me that do. As I was preparing to head out to E3 2016, an email popped into my inbox about a product that claimed to offer relief from motion sickness for gamers, specifically citing VR. Reliefband already has a history with preventing nausea and may just be the perfect tool to strap on your wrist when visiting your virtual world of choice.

Prior to my trip out, I had the chance to chat with the folks over at Reliefband over the phone and I had a lot of questions. Mainly, I just didn't know a whole heck of a lot about what caused motion sickness in the first place. I knew that reading in the car had made me ill a few times in the past and riding on motion simulator rides, Star Tours at Disney World for example, always makes my spouse feel sick nearly every time. The science behind it ended up being fairly straightforward and interesting, so let me break it down as I understood it.

One of the most interesting parts of VR is how it can reliably trick your brain into thinking that you're moving. You get those same flutters in your stomach that come with riding down a steep hill when on a VR roller coaster for instance. Motion sickness comes directly from this concept. When your brain is receiving conflicting signals as to whether or not you're moving, it can trigger nausea in the form of motion sickness. This explains the book in the car scenario quite well: You're in a moving car, which your body can feel, but because your vision is focused away from the passing scenery, your eyes and body are telling your brain different stories. This concept works in reverse as well, for instance with VR, where your body is not moving, but your eyes are in a VR headset tricking your brain into thinking you are moving and thus causes that same nausea.

The Reliefband takes was originally built simply to counter nausea. Cancer patients who recently underwent chemotherapy were given additional drugs to deal with nausea. The folks at ReliefBand thought that instead of putting more drugs in their system, they could simply prevent the nausea at the source. Based on the principles of acupuncture, ReliefBand uses a light electric current in the right spot on your wrist to simply balance the nausea signal and stop you from sick in the first place. As such, it is best used to prevent nausea, though they did say it can alleviate it a bit after it has already begun.

Bringing the device with me to E3 2016, I was excited to give it a try, but I did face two issues. First off, I wasn't able to get into some of the more intense VR demos at the show. I did hear quite a bit about Resident Evil 7 VR making people feel sick but, try as I might, I just couldn't squeeze my way in. The potentially much larger issue was that I'm just not terribly prone to motion sickness at all. That being said, I did have someone waiting for me at home that would be able to help me: My spouse. She has gotten motion sick by everything from theme park rides to simply playing a first-person game on a large monitor. I knew she would be the perfect test subject to see just how well Reliefband does with someone who would benefit from it.

Strapping the Reliefband to her wrist, I sat my betrothed down right in front of our large TV to play some Mirror's Edge (check out these gaming chairs Canada). This would normally turn her stomach fairly quickly. Upon finding the most agreeable setting, this was two for both her and myself, we played the game. Though she was initially quite distracted by the tingling feeling, after some quality play time, I'm pleased to say that she did not get motion sick from the game. This is just a few people, testing an already proven device, but we were both satisfied with the results and look forward to trying it out further. I will say that the higher settings, if you're not acclimated, can be very intense, so definitely work your way up slowly if you feel the need.

Already offering much needed reprieve from nausea in the medical field, the Reliefband is a welcome addition to entertainment as well. It's a little intimidating at first, but the potential for eliminating motion sickness from VR is a major win that could help allow anyone to experience it. Reliefband is available now and I urge you to check out more on their website at Reliefband.com